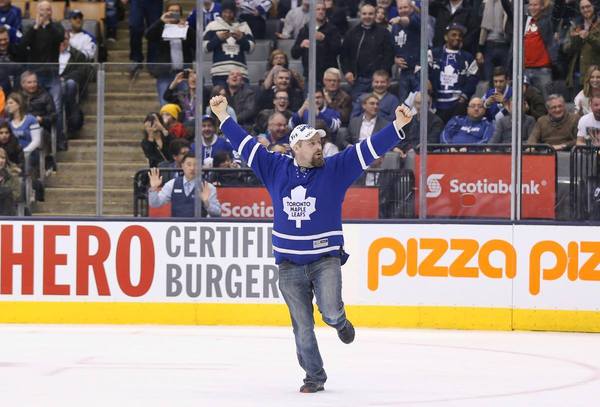 We’re sure you didn’t miss it, but a fan
managed to hop onto the ice at the Leafs home game against Tampa Bay on March
19. It was silly, kind of funny, and far more unique to hockey than it is to
baseball.

It also raises some questions, like why
someone would risk punishment to do this, how they managed to climb the glass
before security could step in, and how much alcohol was involved?

Well, we managed to track down the man who
ran on the ice and became pseudo-famous for a few minutes. We’ve left his name
and any identifying details out, but below you’ll find the key parts of a
20-minute interview conducted last week.

As a refresher, here’s the event we’re
referring to:

Where were you sitting?

We were basically right behind the net, 16
rows up in golds. I guess our eye level was right around the top of the glass.
I was there with my brother, we got the tickets on Kijiji for face value,
couldn’t really pass that up.

Did you plan ahead of time to run
on the ice?

Not really. I mean, during the game, I did,
a little bit. Originally I thought I’d wear a paper bag on my head, but (my
brother) didn’t want to go with me if I did that. During the game, I guess with
the drinks – I think I only had two or three at the game and one or two prior –
I wasn’t drunk, like falling down drunk. I was just feeling pretty good, I
guess.

So I was thinking about it, and scoped out
my spot and decided if I do it, that’s where I’ve got to go. The people all
around us we’re telling me “do it, do it,” so I said, well, we’ll see.

How did you get down close enough
without having platinum seats?

Well I went down to the entrance to try and
see, saw that I could get through, no problem. I was watching the game on the
screen in the hallway and I was waiting until there were about five minutes
left. So when the Leafs called that timeout, I just walked as if I was walking
to my seats.

I just walked right down to the first row
in platinum, because there’s a railing in front of them and I thought if I
could get up on the railing, I could easily get over the glass, no problem.

But I couldn’t reach up to the railing, I
actually ripped my pants a bit. So I stepped up on a guy’s chair, and I ended
up in his lap, my foot slipped into his lap when I pushed off. So I looked at
him and said ‘give me a hand,’ and he just kind of looked at me in shock but
then he gave me a little push. At that point, the usher was coming, and I just
went for it and went over.

Did the landing hurt?

No, it didn’t hurt. Because I held onto the
glass and just dropped from it. And with all the adrenaline and excitement…

Did you mean to do the butt
slide?

When I first got over, I stopped on front
of the net. They opened the door and the one guy was waving me to come off, and
that’s when I did my little dance with my cap there. Then I was running away
from him in slow motion, that was my funny little strut. At that point I saw
the puck there – I wish I had saw it sooner, I would have picked it up and
pointed in the net, ‘put puck in net, simple.’ But I didn’t want to be out
there too long and press my luck. So on the way back I saw the puck and decided
to take a shot with my ass, because I figure the Leafs would probably have more
luck if they shot with their asses.

So security takes you off the ice,
what happened from there?

They were fine getting me off. Then I
grabbed the glass door for a moment, then they got a little more forceful and I
did a fist-pump. One of the guys, maybe his ego or testosterone, tried to
wrench my arm up behind my back, so I pushed his arm back and kept him at bay.
You can see in the video I look over to my left and tell him no need for that.

Then I was escorted into a little room that
looked like a lunchroom. The cops were there, somebody from the arena, a
paramedic. I was handcuffed then and spent about an hour there. Then it was off
to 52 Division.

In the back of the cop
car?

Yeah, it’s pretty damn small back there,
too. I’ve been in there once before. It’s so small, I don’t know how they fit
any large people in there.

So are you charged with
anything?

I guess I’m charged, right? I was charged
with mischief and obstruction, I don’t know what the obstruction part entails.
I have to go to court. The max fine is $5,000 and it doesn’t mention anything
about any jail time or anything like that. I don’t expect I’m even going to get
that, to tell you the truth, I think I’ll get off fairly easy.

(Note: He is presently not allowed within 100m of the Air Canada Centre, though as he understands it this is only until the court date, when a long-term determination will be made.)

I guess the question most people
would have is why do this?

It wasn’t an attention grabber or anything
like that. I’ve been a Leafs fan forever, and they become part of your family.
Some people will dispute that, but you get involved and they get into every
ounce of your being. I invest more of my time into that damn team…so I kind of
came to the realization that, that’s it, I’m done.

It was a conscious decision to take charge
and not let things like the Maple Leafs control a part of my life, it was empowering,
reclaiming that, and it was.

I have no regrets other than that there’s
an usher you can see in some of the photos, he has such a dejected look on his
face that I got by.

You’re done with the Leafs,
then?

I’m done with the Leafs. I’m done with
being angry and yelling at the TV and disrupting my kids, upsetting them. Also,
now they become Leafs fans and it’s hard to watch them go through it, crying
last year after game seven. I want to try and protect them from that.

If they win one, sure, I’ll be back on the
bandwagon, because then it’s not going to hurt me and I might as well have my
party, too, because I’ve put in my time in with them. They’re the richest team
in the whole league and this is what we have to put up with, constantly? I
can’t, I’m too tired.

Any other parting shots?

I want to challenge the Leafs brass. I
challenge MLSE to hold a lottery where a Leafs fan could coach the Leafs for
one season, unpaid, rewarded if they make it through the first round of the
playoffs. It can’t be any worse, plus they would save money and get
astronomical publicity (not that they need it). Or, just hire me, same deal.