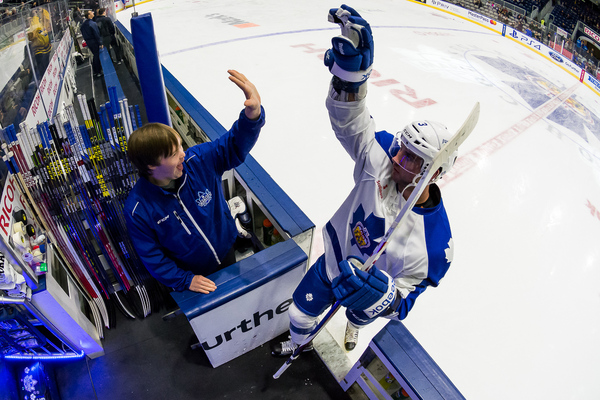 The Toronto Marlies ended a highly successful 2015 on a high note today. Never once giving up the lead in a close 3-2 victory over the Lake Erie Monsters, the team securing their spot as the AHL’s top team at the end of the calendar year.

With William Nylander in Helsinki, Frederik Gauthier injured, and Mark Arcobello up with the Maple Leafs, the Marlies found themselves short at centre; perhaps the most important skater position. Understanding the situation, defenceman TJ Brennan, who is best known for his offensive prowess, volunteered himself to move up for the game and found himself slotted beside Casey Bailey and Richard Panik.

Interestingly, Brennan’s first shift still came as a defenceman, thanks to a penalty to the Monsters. While Toronto wasn’t able to convert on that powerplay, they did eventually score the game’s first goal, as Josh Leivo ripped a shot moments after an offensive zone faceoff win by Ryan Rupert. The lead didn’t last long, though, as Brennan’s line was on the ice for a response goal from Michael Paliotta just two minutes later.

The Marlies returned to the man advantage a few minutes later after Kerby Rychel took fourteen penalty minutes in a fit of range, and that lead to Brennan picking a corner and restoring the lead, though he did it as a defenceman. His powerplay prowess was a curse as much as it was a gift; on Toronto’s next opportunity, Panik tried to set him up for another goal, but was instead intercepted by Trent Vogelhuber who scored a shorthanded tally with thirteen seconds to go.

Sheldon Keefe shook up the lines a bit in the second period, particularly after Brennan lost his fourth consecutive clean faceoff. Sam Carrick ended up taking the next draw while Brennan went to the point, which hinted at Brennan being done up front for the night, but he eventually found himself on a line with Matt Frattin and Brendan Leipsic. On their first sort-of shift together (Brett Findlay had yet to shift off for Leipsic), Frattin stripped a Lake Erie player off of the puck and put himself on a breakaway, failing to beat Anton Forsberg the first time but potting his own rebound for his seventh of the season.

Frattin’s goal ended up being the game-winner though there was a lot of held breath in the time that followed. While Toronto controlled the second period, the Monsters had plenty of opportunities to strike back in the third; particularly thanks to a pair of penalties to Sam Carrick and Ryan Rupert in the final six and a half minutes. Rupert’s, in particular, was a little questionable, as he appeared to fall on the puck, resulting in a closing hand call. Toronto killed them both off, though, and Rob Madore continued to shut the door until the final buzzer.

With the win, Toronto finishes the 2015 half of the AHL season with a league-leading 25-7-2 record; good for a 0.765 record. Their goal differential of +48 is also a league best. From here, they’ll take a day off before returning to the ice on Saturday afternoon against the Syracuse Crunch.

Oil Kings Update: Should Kirt Hill have loaded up?

The Flames are in a good spot between the pipes

WGD #48: Three things to watch for against Pittsburgh