By now you’ve probably got an inkling that Lou Lamoriello has a few practices that make him a bit unique as a general manager. Call it old school or military-like, either way, he has a number of somewhat quirky ideas about how a team should be run, and how to push the notion of “It’s all about the logo on the front“.

Now that prospect development camp is underway, we’ve sort of embarked on the upcoming season to an extent, and there’s been more talk about Lou this summer than ever with the way the draft and free agency have unfolded. It seems his grip on the team has tightened.

So let’s talk about some of Lou’s Rules, and whether or not, in 2016, they might still be good for the team.

We’re not talking about dCorsiXGF%_Per60/60P90x or anything like that. This is about the numbers on the back of the sweaters.

Lamoriello has guidelines on which numbers players can use, and the general takeaway is that he doesn’t like high numbers because they’re somehow seen as flashy or stand-out-ish. As far as I can tell, Lou’s Rules stipulate that players shouldn’t wear anything above 30, with exceptions for guys with long standing in the league (Mogilny with 89, Jagr with 68) or goaltenders (30, 31, 35 and 40).

From All About the Jersey:

The thinking behind keeping everyone’s numbers low is ostensibly to keep people focused on the name on the front of the jersey rather than the back, which is definitely a reflection of Lou’s philosophy. One drawback is the constant changing of jersey numbers as the Devils try to keep all of the jerseys below 30 each season.

We might be seeing a little of this already, as Toronto has yet to release an Auston Matthews number 34 jersey to the world for obscene sales, since apparently he still hasn’t been officially given that number. As it’s been noted a few times in the past, this rule is a bit flimsy though, with guys like Kadri and Rielly able to hold on to their numbers (43 and 44 respectively), and Nylander being given 39.

Still, it’ll be interesting to see what Matthews ends up with, as well as Marner who’s worn 93 with the Knights. I definitely wouldn’t count on the latter getting his way.

As a fan, having a rule like this in place is unfortunate. Matthews jerseys could be selling out as we speak if they were made available right after the draft. And who wouldn’t want to see Marner throw on Dougie’s old 93? It’s almost like the Leafs don’t want my money.

The funniest part of Lou’s numbers rule is there’s a ban on number 13, which is sort of cute if it’s rooted in superstition. Lou did run a team named after Satan himself for a quarter century, after all. No matter, with Sundin donning that number for the Leafs, it’s doubtful anyone would try to wear it soon anyway.

This was the earliest noticeable change when Lou was hired. At the beginning of last season, there wasn’t a beard or mustache in sight. Tyler Bozak’s hockey hair? Gone.

Sticking with Lamoriello’s message of “professionalism”, players had to tidy things up.

It’s hard to get too upset about something as minor as this, but in a league that’s already so painfully boring and devoid any notable personalities, it just adds to the reputation the NHL has built as a no fun league.

This rule, or whatever the hell you want to call it, is a bit more serious than the rest, and probably something we’ll hear about more in the coming weeks. It’s essentially the reason I wanted to put together this little guide.

Lamoriello doesn’t like handing out bonuses to rookies on their ELCs. That much we know for sure. Problem is, with Auston Matthews now in the fold, the team almost doesn’t have a choice, considering he’s the first overall selection.

The past 11 first overall picks have all maxed out their bonus structure for their entry-levels, and you’d think Matthews would obviously do the same. But he hasn’t signed anything yet.

As Chris Johnston notes, here’s what Matthews would be looking for:

• $925,000 in salary, with $92,500 of it paid in signing bonus;
• $850,000 in “Schedule A” bonuses, which are tied to individual achievements such as goals, points, time on ice, etc.;
• $2 million in “Schedule B” bonuses, which are given for league-wide excellence such as trophy nominations or finishing among the scoring leaders, making them extremely tough to hit.”

There’s no reason to be concerned about this negotiation going sideways, since there’s plenty of time before now and the opening of the season. But for talks that should be so straight-forward, delays in the process are puzzling. And as Johnston notes in that Sportsnet piece, this is a situation at least worth keeping an eye on.

Put it on mute

You’ve probably noticed stories and rumours regarding the Leafs don’t leak through the media like they once did. When a trade or signing happens, chances are Toronto’s official PR account is relaying the news first.

When it comes to this winning culture Lamoriello wants to establish, I like this measure best, and think it’s particularly well-suited to a place like Toronto.

Don’t get me wrong, I’m in no way old school when it comes to how I think teams should be run. Players, coaches, and even front office staff should be accountable and speak with media. But in the so-called hockey mecca, things can really get out of hand. 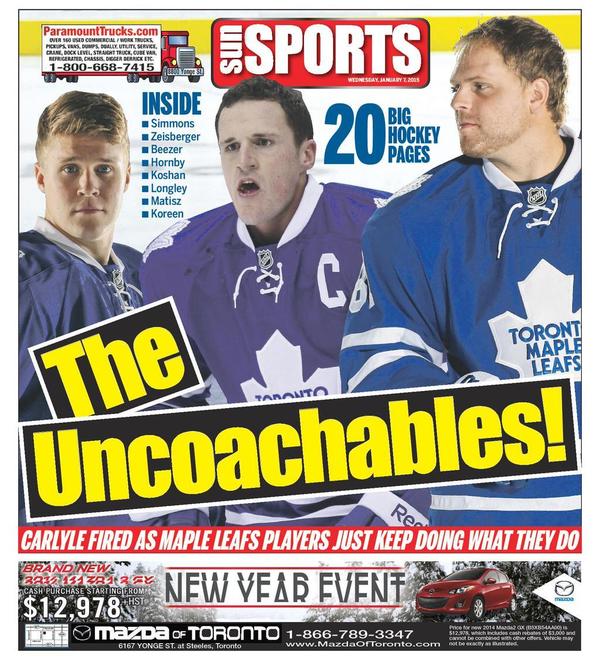 There isn’t a management group in the world that can stop this sort of nonsense, but it seems front offices in the past have almost helped things along when it comes to attacks on players. Making bold predictions, putting players in positions to get steamrolled both on the ice and in the scrums, they really haven’t handled things well.

With such a young crop of players now making up much of the Leafs core, Lamoriello and Babcock have continually reminded us that they’ve made a priority of creating a better (or “safer”) environment than past regimes. Shutting out a few vultures and tightening up on trade rumours has been a good start.

Hitmen Report: on the road again

CanucksArmy Utica Comets Post-Game: The Comets Get Four Points From The Gentleman, Three From Lind and a Pair From Juolevi En Route to 6-3 Win Over Hartford

JNR: Worst Effort Of The Year?

WINGS POST-GAME: At least we got a point? Does it even matter anymore?

The rotting, layered onion that is the Astros sign stealing scandal