Hello from NY, where we are expecting up to a foot of snow tonight, so as I sit all cozy inside in my layers I thought I’d bring you all some of the hockey happenings. As you might expect at holiday time during a pandemic, it is a tad slow on the gossip front. But let’s see what we can find, shall we?

As always, we begin by checking in on our Leafs. Auston Matthews continues to entertain big name guests down in AZ, and this week it was the one and only Justin Bieber!

These two…….they just get so giddy for each other… pic.twitter.com/zmtpR1HBjG

As we mentioned last week. the non-Toronto based Leafs seem to be slowly making their way back to the Six, and we learned this week that Justin Holl is camping out with Mitch Marner and his girlfriend, Steph.

mitch told Tim & Sid this week that justin holl is currently living with him (the holls are close friends of mitch & gf steph – recommend watching their leaf-to-leaf if you haven’t!) pic.twitter.com/3hww1tpEN6

Jack Campbell is settling into snowy life in Toronto, and so are his cats. 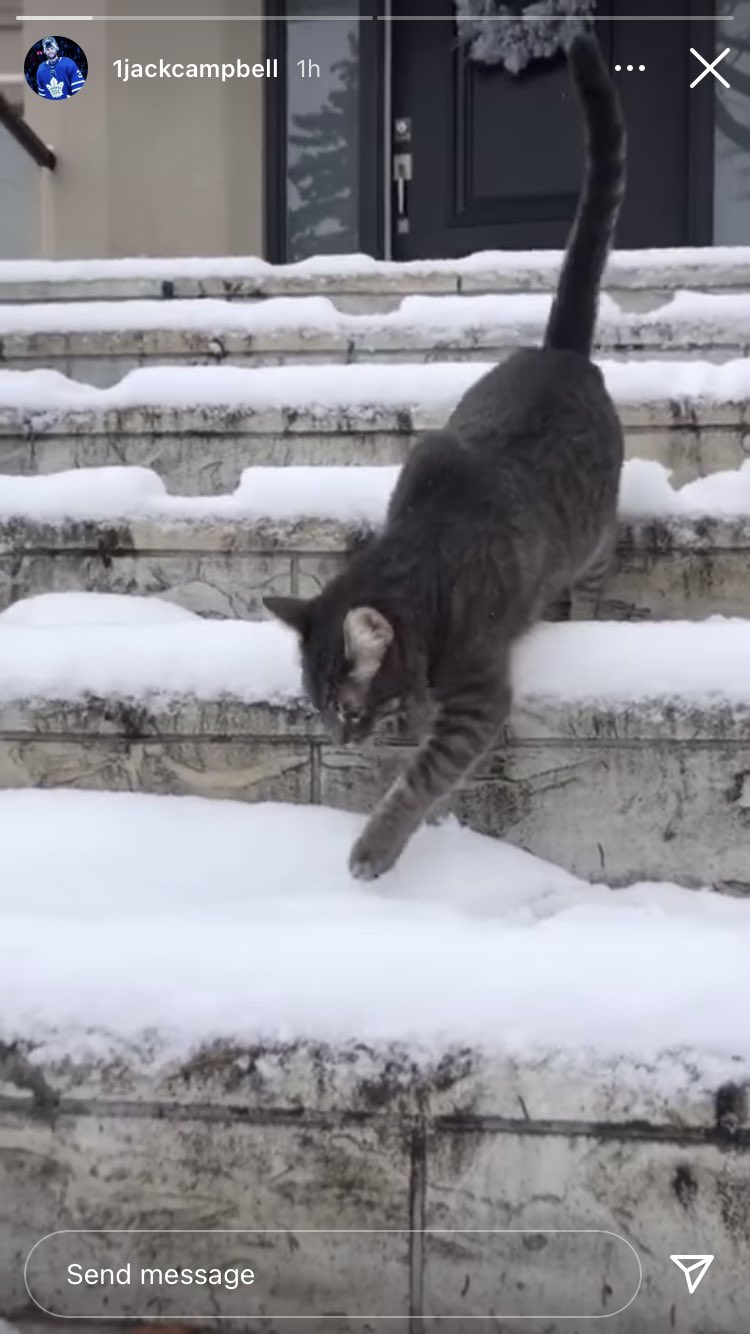 And finally, apparently some Leafs fans don’t value our players as much as I do:

There has been quite a bit of change this year in the sports world, with some teams that have had culturally insensitive names and/or logos moving away from their past and into a more inclusive and culturally aware future (looking at you, Chicago Blackhawks.)

This past week, new Canucks goalie Braden Holtby was informed that his mask design was appropriative of First Nations culture. He was quick to apologize and pledge to change the design and use an Indigenous artist in the future.

Vancouver Canucks goalie Braden Holtby is apologizing after the artwork on his new custom-painted mask was criticized for appropriating First Nations art. https://t.co/uVNyTciFp8

In the aftermath, there was suggestion that similar measures be taken regarding the Canucks logo:

In light of sports teams in Cleveland, Washington, and Edmonton getting rid of racist and appropriated Indigenous team names/logos, it's time to have a discussion about the Vancouver @Canucks's Indigenous appropriated Orca logo. Here's a thread. pic.twitter.com/QCuR6zoBae

Moving toward a league that is culturally aware, inclusive, and diverse can only be a good thing.

Listen, I don’t know much about Swedish hockey, but this seems like A Big Deal:

Potentially big story brewing in Swedish hockey: There are allegations that members of Björklöven "fixed" tonight's 8-4 loss to Mora in the Allsvenskan.

The CEO of the team says he welcomes the investigation, which is already underway. https://t.co/jCv6iV4nLJ

Over in St. Louis (we assume). Steve Ott adorably terrified the sh$t out of his kids during family holiday photos. Thanks to his wife Erica for capturing the hilarity and sharing it with the world.

Check out the whole series HERE.

So we also learned this past week that the original divisional realignment that was leaked a while back was incorrect, and the new alignment was released. This in and of itself is fairly undramatic.

However, hockey reporters arguing about it? That’s pretty entertaining:

BTW, if you want to pretend to be @ddale8, by all means. Bring it on. We can start with your divisional alignment, which was wrong from jump street – and we’re not talking about the Flyers omission. 👍🏻

Checked in on Max Pacioretty being shopped by the @GoldenKnights, and I don't believe he's in play. Even if he was, I believe his NTC would cover some of the teams being mentioned as destinations.

If you missed it somehow, The Toronto Six unveiled an awesome new locker room yesterday, and we had an exclusive first look! Really cool stuff.

Stay warm and dry out there folks, and don’t forget to check us out on Twitter.