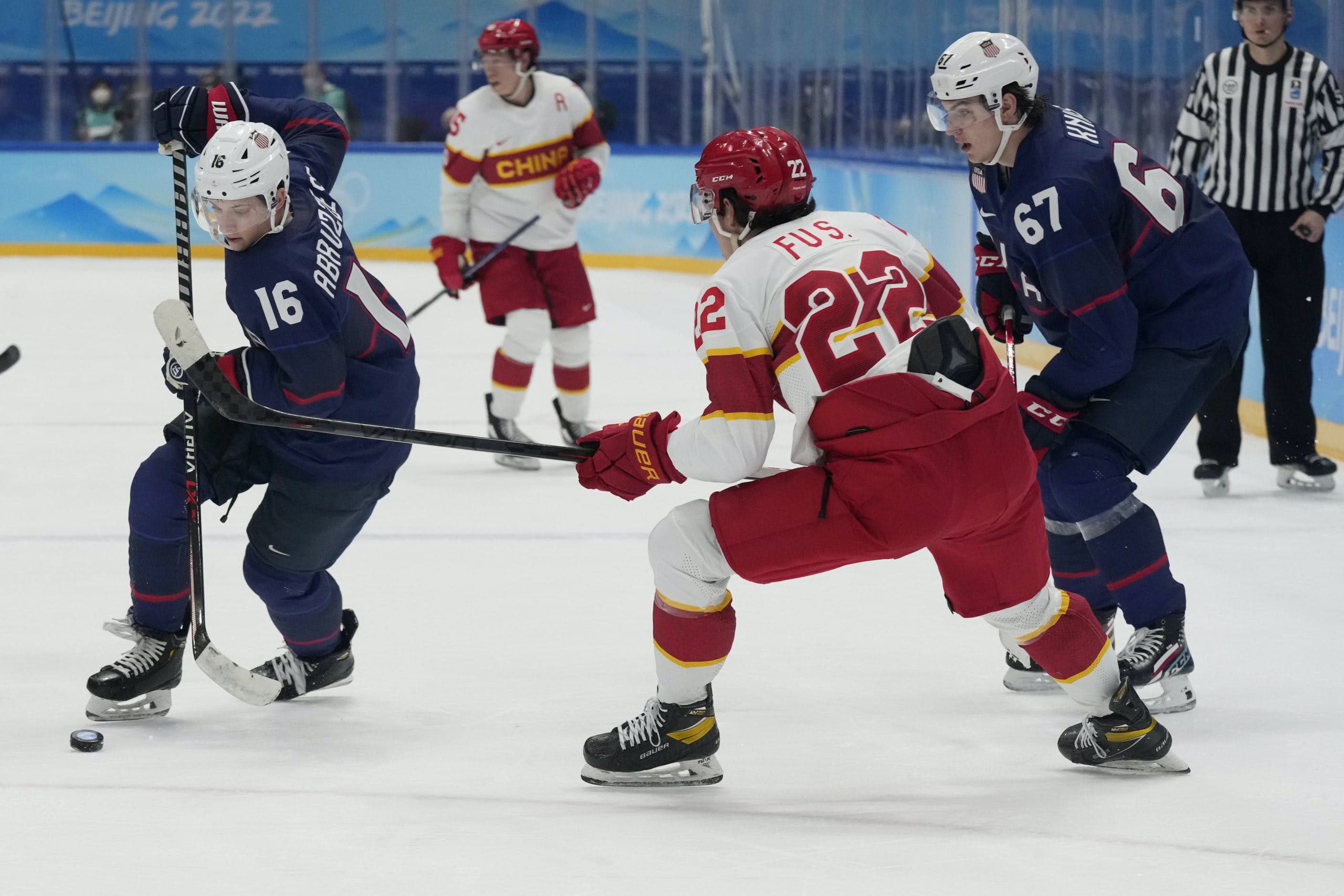 By Nick Barden
9 months ago
The Men’s Olympic Hockey tournament has begun Beijing.
There wasn’t much action during the first day of games as the Russian Olympic Committee defeated Switzerland, while Denmark ousted Czechia. Former Maple Leaf, Kirill Semyonov, who only played three games in the NHL, assisted on ROC’s only goal of the game.
Day one was a bit slow, but the second day of Men’s Hockey was jam packed with Sweden taking on Latvia, Slovakia vs. Finland, USA against China, and Canada facing Germany.
I guess you could say it was a full day of former Maple Leafs and current Maple Leafs prospects playing in games.
Let’s get started!

Game one of the night/day saw Team Sweden defeat Team Latvia 3-2.
Latvia was one of the teams I was excited about before the NHL announced they would not attend the Olympics. Maple Leafs prospect Kristiāns Rubīns was really excited to play in Beijing after being one of three players named in early selections.
The story of Latvia, though, is still very exciting. If you remember back to the Olympics in Sochi back in 2014, Latvia stunned Switzerland while almost doing the same to Canada in the quarter-finals. It was an incredible summer for the country, which was when they secured their spot to go to these Olympic games
In their first game of the tournament, Latvia had a late comeback, but couldn’t get the job done against Sweden.
One player to look out for on Team Sweden is Maple Leafs prospect, Pontus Holmberg, who had an assist in last night’s game.
The 6th-round-pick in 2018 played 13:26 in his first-ever game at the Olympics. Both himself and the Maple Leafs will look for the 22-year-old to have a strong showing in Beijing. Holmberg, in 34 games with Vaxjo HC in the Swedish league, has 28 points (10G, 18A).

I’ll admit, this game was very interesting for me.
On one side, you have former Maple Leaf, Martin Marincin, who spent five years with the organization. If you know me, I do in fact have some history with the 29-year-old.
Team Finland also has a few players who spent time within the Maple Leafs organization. Those players included Leo Komarov, Miro Aaltonen, and most recently, Mikko Lehtonen.
The game, though, was all Finland who defeated Slovakia 6-2.
Aaltonen, who spent one season with the Toronto Marlies, had two goals and one assist in Thursday’s game. Lehtonen, who was with the Maple Leafs during the 2020-21 season had an assist.

This was the second-most exciting (actually, maybe the most exciting) match of the day because the United States had a ton of players related to the Maple Leafs.
In terms of former players in the organization, you have Kenny Agostino, David Warsofsky, and Nick Shore. The most exciting part was watching Maple Leafs prospects, Matthew Knies and Nick Abruzzese.
Knies, who was drafted by Toronto in the second round of the 2021 NHL draft contributed to USA’s first goal of the game.
After only scoring one goal in the first period, USA turned it up in the second scoring three against China.
The fourth goal of the game was scored by Sean Farrell, which was assisted by Abruzzese.
The third period didn’t get much easier for China. Farrell, who scored a goal in the second period, added three more in the third, finishing with a hat-trick and five points on the game.
Second-overall pick in the 2021 NHL draft, Matty Beniers scored the seventh goal of the game. A great shot by the 19-year-old. Abruzzese, who had a primary assist in the second period, had another on this goal.
There was some fun during this game with Knies, who tried the flip pass over the net that Trevor Zegras did earlier this season. The 19-year-old also tried the lacrosse goal but couldn’t get it to go.
USA scored four goals in the final frame and defeated China 8-0.

The main event of the day was Canada taking on Germany.
On Team Germany, there’s Korbinian Holzer, who spent five seasons in the Maple Leafs organization from 2010 to 2015. On Canada, as you may already know, is Josh Ho-Sang, who is currently on an AHL deal with the Toronto Marlies. Another player with ties to Toronto is Daniel Winnik, who played on the Maple Leafs during the 2014-15 season.
He scored Canada’s third goal of the game.
Similar to the fun in USA’s game, Canada had some of their own. There was a glimpse of magic (almost) as Mason McTavish was thinking of doing the lacrosse move. Ho-Sang as well had a nice move in the third period, but couldn’t score.
Canada added two more goals, while Germany was able to score one. 5-1 was the final.
The game to watch will be tomorrow at 11:10PM ET, as Team Canada take son the United States. It’s a late one, but it’ll be an exciting one.
More from theleafsnation.com
Uncategorized
Recent articles from Nick Barden