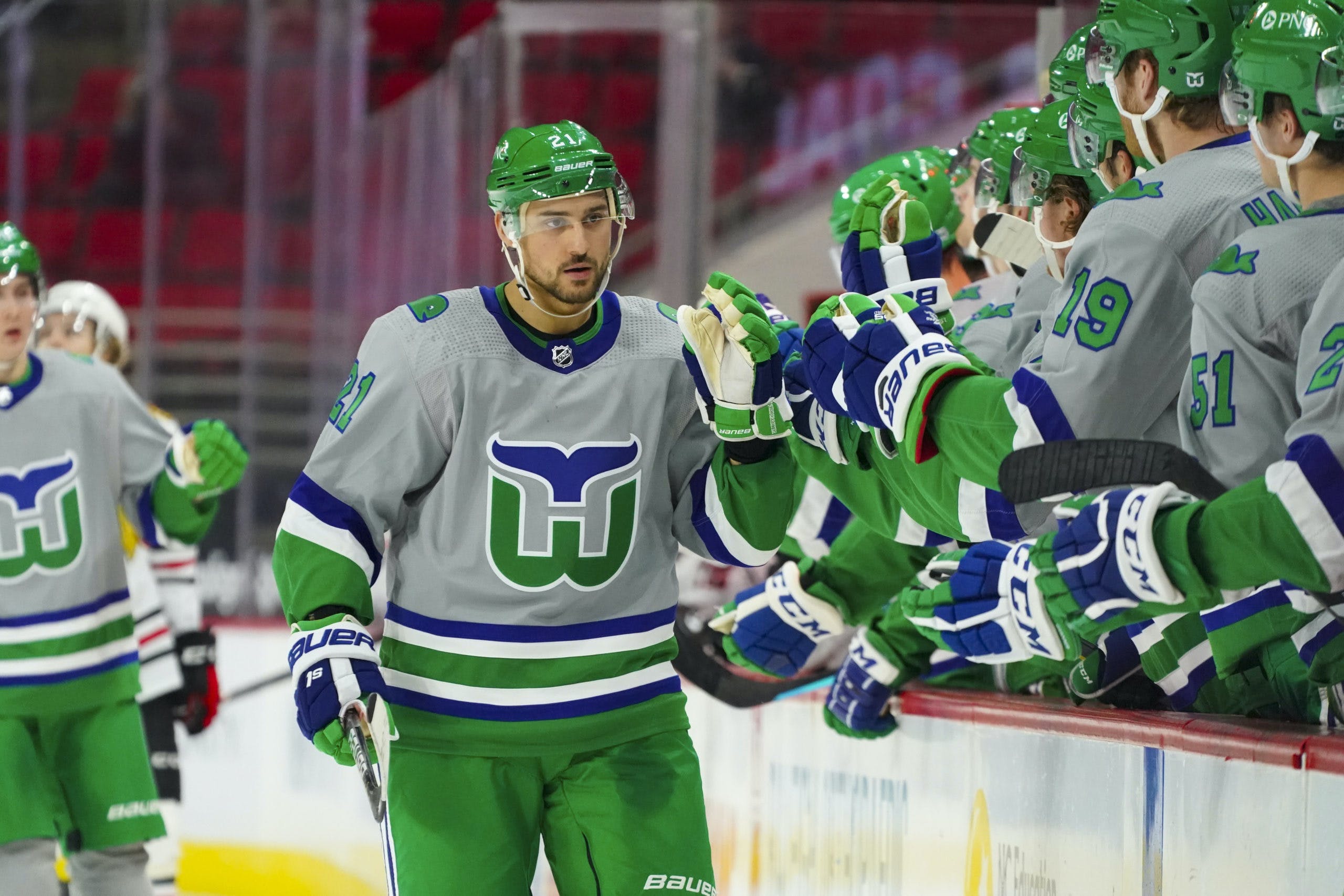 By Jon Steitzer
6 months ago
The Leafs’ cap situation and near-complete roster probably support the notion that there isn’t any reason to worry about who is left in free agency or not. Still, as we saw yesterday, trades are going to happen around the league and as a result, there is a possibility of cap space or holes in the roster. That’s why we’ll put in some work regarding who is left even if the Leafs free up space by moving all three of Holl, Muzzin, and Kerfoot, that probably isn’t enough to take a run at @Nazem Kadri. So I’ll reluctantly exclude him from the list, and focus on the players that seem like they could fit the Leafs’ cap situation, and address some kind of need for Toronto.
As a refresher, here’s the Leafs cap situation (think depth chart, not line combos. I assure you I’m not suggesting line combinations in the below table, otherwise at the very least Joey Anderson would be there.)

Gross, right? No money, can’t even sign a league minimum player let alone the two RFAs. Let’s clean that up a bit more to give you all some peace of mind as to why we’re talking about free agents still.

There. That seems a little bit better. There is still a minimum of $2.25M that needs to be committed to those fourth line roster spots, but with three standard players contracts still available it at least gives the illusion that anything is possible and the Leafs can still add or at the very least the Sandin and Engvall signings start looking feasible. So if we’re talking about the 50 SPC limit, and two of the remaining contracts are spoken for with Sandin and Engvall, really this is about the Leafs having the ability to add one more player before dumping contracts. (Considering how many waivers claims have been made on Leafs players, I don’t blame them for starting the year at 50).
Now you can breathe an even greater sigh of relief when you start considering what can be done with Holl, Kerfoot, and Muzzin. Oh the possibilities, but let’s dial it back to far more likely reality it’s just going to be a Holl move.
Cold water has been thrown on the Leafs roster situation and any remaining fun seems to have been taken out of the free agency market, so let’s start looking at who is left that warrants a look from the Leafs.

After Kadri and Klingberg, Niederreiter is likely the best of what is left. His point total last season was below Alex Kerfoot’s so I suspect some level of objection every time I say the Leafs should move on from Kerfoot in order to take a serious run at signing Nino. He’s a power forward that adds size and skill to the top six and we can kid ourselves into being a potential Chris Kreider type of late blooming star. Or at least the perfect guy to bounce pucks off of on the power play.
Niederreiter isn’t going to come cheap and his contract projects at 7 years at $5.7M AAV, according to Evolving Hockey’s projection model, but that isn’t impossible. That’s one Jake Muzzin trade. That’s finding a team that Muzzin will waive his NTC for and seeing what they can make work. Even if it’s a similar approach that Vegas took with Pacioretty, it is an unfortunate reminder that cap space is an asset.

Charts like that have to get you at least a little intrigued about the player.

Back on planet Earth, we can talk about Sam Gagner who has the potential to be a cheap offensive bottom six player, but one that has rounded out his defensive game, at least against the sheltered competition he faces. He’s good friends with John Tavares and is the first of two suggestions on this list that are captain approved.
Gagner seems to be very aware of where he’s at in his career and is mainly looking for his best close to home options. That really keeps in the Toronto, Detroit, Buffalo, and Ottawa area, I guess with Detroit and Toronto certainly being the favourites. The fact that he has been willing to spend time in the AHL before means he could again, and the Marlies being just down the road probably adds to the appeal of Toronto.

Is the other captain approved option on the list, but maybe the friends of Tavares quota was filled when Matt Moulson was named as a scout for the Leafs.
Subban by no means is the player he’s been in the past. He’s still a strong enough offensive option, and can still throw a punishing hit or two, but his generally sloppy defensive play would restrict him to third pairing responsibilities, and while it would be nice to bring him home, Subban might not yet be ready to accept the close to league minimum offering the Leafs would pitch to him.

Victor Rask has never lived up to expectations, but maybe Toronto will be different. I’m just kidding. Rask is what he is, except he seems to be a viable defensive forward option in the past few seasons and even if the offense isn’t going to be there in abundance if the price is right he’s a strong bottom six guy that can play up if the situation calls for it. We’ll call him a poor man’s Kerfoot, assuming he needs to be replaced.

Calvin seemed to be the darling of the trade deadline, then went nowhere, and now that lack of interest seems to have continued into the summer.
de Haan has been good enough on a bad Chicago team and can still take minutes at a middle pairing rate if needed, but is a far more ideal option as a bottom pairing guy you can move up when injuries start occurring. Calvin also has the benefit of being able to line up on the right side despite being a left shot, so his versatility adds value too.
At 31 years old, and still unsigned after the initial days of free agency it’s entirely possible that we could see a manageable cap hit in de Haan’s future, but the catch is that it will probably be somewhere around what Justin Holl is making, with a bit of term to bring the number down. Really de Haan only makes sense if the Leafs decide to move on from Muzzin and pursue the best possible replacement for him.

Fun fact: Michael Raffl got votes for the Selke last season. Yeah. He also threw a ton of hits and only carried a $1.1M cap hit, but is probably due for a minor raise. Raffl’s not going to check off any boxes when it comes to the Leafs scoring needs, but he’s an interesting defensive option and one that would be hilarious to see on a line with Kampf and Jarnkrok. If the Leafs are protecting a third period lead, that trio could make the rest of the game unwatchable.

Players like Raffl seem like a fun idea until we actually watch them every night if the Leafs were to go with three fun lines and one that sucks all the energy out of the room, that would still work for me.

Aston-Reese is in many ways similar to Raffl, but with age being on his side, even more hitting, but while good defensively not at Raffl’s level and potentially he’ll come with a steeper price tag which is likely why we’ve heard his name connected to the Leafs but nothing materializing. The two sides could double back to each other, but between Aube-Kubel and Jarnkrok already being brought in, and Gaudette quite possibly being put into defensive hockey player boot camp this summer, the Leafs bottom six seems to be figuring itself out.

Finally, Sonny Milano. A big reason for including Sonny Milano on this list is that if I didn’t I feel like there would inevitably be a question about where Sonny Milano is when the Leafs could use a scoring forward. I could have just as easily put Ryan Donato or Danton Heinen here, and they could all be good options. Heinen and Milano in particular have strong underlying numbers that point to being good investments, especially as buy low players. Milano could very well be on his way back to Anaheim, he did well there, and they have the money to make him an offer. Danton benefited from being one of this year’s “Mark Donks” in Pittsburgh and Ryan Donato is a wild card because of Seattle, but they could certainly bring him back too if nothing better materializes for them. None of them seem like they are destined for Toronto, but are very much three players that need to wait to see other stuff sorted out first.
I feel like it has to be acknowledged that Phil Kessel is still out there as an option free agency as well, and maybe at some point he begins to consider Toronto an option, but I’m going to guess there are complicated feelings with the organization both ways and certainly no desire to deal with the media here again that make him an easy exclusion from this list.
Data from Evolving Hockey, PuckPedia, and Hockey Reference
More from TheLeafsNation.com