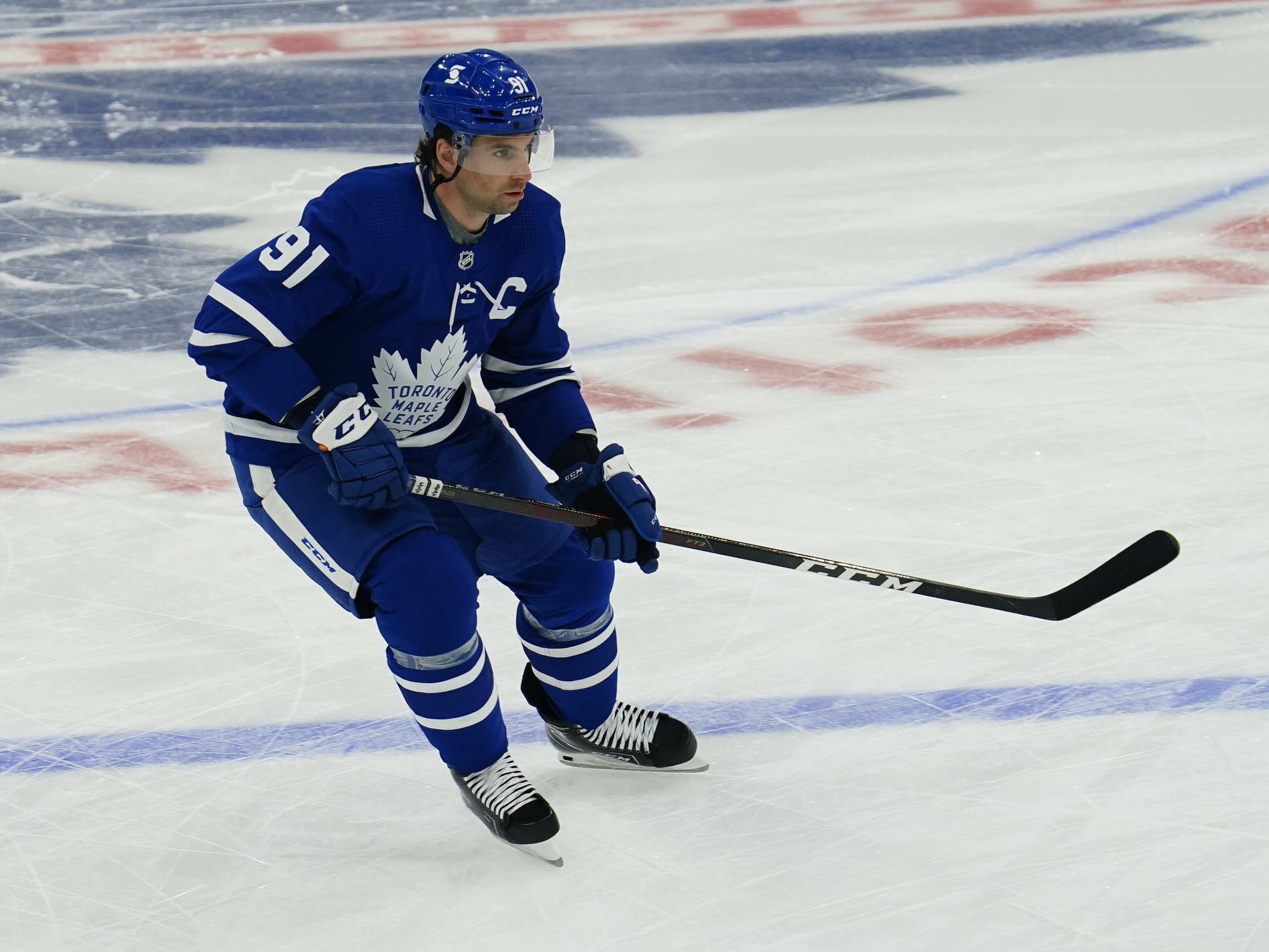 By Michael Mazzei
1 year ago
I’m not sure if you are aware, but a brand new NHL season is right around the corner and that means the Leafs will be returning to the ice soon.
Isn’t that exciting? No? Moving on.
The ever longing dread of getting hopes up for a franchise that is currently associated with a four-digit number and an embarrassing ending to their previous campaign is starting to creep up again. The blindly optimistic are eager to emerge from their caves and shout to the mountain tops that “This is the year.” Others are looking ahead to when the playoffs start and will only judge on how the postseason fares. All of this is in anticipation of a home opener that will host fans for the first time since 2019, which just so happened to be the day @John Tavares was revealed as the team captain.
Speaking of Tavares (who seems to be recovering nicely from his scary concussion), he is a player that I have yet to do a career simulation on and today seems like the perfect opportunity to do just that. And as you can tell by the title of this piece, we are changing up how we go about doing that.
Franchise Hockey Manager 7 is a text-based simulation that covers a bunch of leagues and offers a more in-depth experience when compared to EA Sports’ offering. The game is part of an ongoing series that is being developed by Out of the Park Developments, which is famous for the well-renowned Out of the Park Baseball series. As someone who has played both games extensively, I can confidently say that they are both entertaining and are worth every penny. I have always wanted to try using the game as a method of career simulations so it felt like the right time to give it a go.
This simulation will follow the same rules I have applied in my previous entries using NHL 21, which you can check out below.

Here are the rules that I will be following:
The game would only allow me to start at the 2021 season, so I will skip that year and begin with the upcoming year as a way to make things fair. In the 2021 campaign redo, the Leafs missed the playoffs by a tiebreaker and the Canadiens went on to win the Stanley Cup over the Stars (groan). @Zach Hyman signed with the Senators, @Frederik Andersen with the Wild, and @Nick Foligno went to the Kraken. With all of that out of the way, here’s how the Leafs’ line look at the start of the 2021-22 campaign:

And here is Tavares’ player profile:

Let’s not waste any more time and get straight into the simulation!

A decent regular season for the Leafs sees them finish third in the Atlantic with only eight points separating from the division-winning Panthers. Tavares was stripped of the captaincy for some reason (with @Auston Matthews taking over) and it must have upset him greatly because his numbers took a noticeable hit, finishing with only 58 points in 76 games played. Despite this drop in scoring, it will still be good enough to finish third on the team in that department.
The playoffs were nothing short of incredible as the Leafs marched their way past the first round for the first time in ages and carried that momentum all the way to the Finals where they beat the Avalanche in six games to snap the curse! Tavares had a solid playoff run with 14 points in 18 games played, 10 of them being goals (!!!). For those of you wondering, @Mitch Marner did indeed score multiple goals in this playoff run.

In the offseason, @Morgan Rielly could not agree to terms and instead took his talents to the Stars. The only notable addition the Leafs made during this time was @Nick Paul, which speaks more to how limited their cap space is.
This time saw the Leafs drastically improved on their regular season performance as they improved to 110 points, but it was not even close to the Bruins who dominated the NHL on route to a Presidents’ Trophy. Tavares continued to see his numbers go down slightly with 55 points over the entire year. This time around, the playoffs were not too kind to the Blue and White with them only making it to the second round where they were bounced in six by the Bruins, who would go on to win the Cup in seven games over the Oilers. With eight points in 11 postseason games, Tavares certainly did his part to give his team a chance at another deep run.

During the offseason, the Leafs struck a four-year deal with local broadcasters for a whopping $56 million. They lost @Justin Holl and @Alexander Kerfoot to free agency while picking up @Michael Dal Colle and @Par Lindholm (remember him?).
It was a similar outcome in the regular season for both the Leafs and Tavares’ offensive output. They secured the second seed in their division but were well behind the winners who topped the NHL standings (this time being the Lightning), while Tavares only mustered 52 points in 81 games played. It appears that age is creeping up on the former captain and his efficiency is beginning to diminish with each passing campaign. Meanwhile, the Leafs once again were eliminated in the second round as they were swept by the Red Wings. The Avalanche would go on to win the Cup and the team would celebrate with a big bowl of chickpea pasta.

It was a tough offseason for Leafs fans as the thing they feared the most became a reality. Matthews did not re-sign and took his talents down south to play for… the Wild. With the money saved, the team spent it on acquiring the services of @Jujhar Khaira, @Tyler Motte, and an ageing @Kris Letang.
Things turned out quite entertaining during the regular season as the Leafs never led the Atlantic until the final day of the season where they clinched the title by a single point. Meanwhile, Tavares went through a bunch of injuries and was limited to 63 points where he mustered up only 40 points. The Leafs would go on a deep playoff run and made it all the way to the third round. There they overcame a 3-1 series deficit to force a decisive seventh game but would lose to the Blue Jackets who went on to sweep the Jets for the Stanley Cup. Tavares’ 11 points in 19 playoff games had him one off of Marner for the team lead.
After the playoffs ended, Tavares’ contract expired and he decided to stay an additional year with a $6.5 million AAV.

This offseason was highlighted by the team getting younger and shipping off long-time presences for long-term gain. Gone were the likes of Motte, TJ Brodie, and @Ryan Dzingel, while @Jackson Lacombe and @Corson Ceulemans were acquired via trade. I would also like to point out that Marner is now the captain in the wake of Matthews departing the previous season, so there’s that.
It proved to be a mediocre season for the Leafs as they missed the playoffs by a wide margin, instead of duking it out in the tank battle with the Sabres, Islanders, and Stars. Tavares himself struggled mightily as he finished the year with a measly 35 points, so it’s safe to say his best days are well behind him. The Senators would take out Matthews and the Wild in five games to become Stanley Cup champions.
At the end of the season, Tavares inexplicably decided to call it a career. He leaves behind his time in Toronto in a good spot since he was a Stanley Cup champion. Now that he can focus his time on his family, here are his final stats:

I was kind of disappointed in how short this simulation was given that Tavares retired at age 35. Then again, he proved to have a successful short stint and made the most of those five years which included a Cup in Year One. Despite a noticeable drop in points each passing season, he had a good stint with the Leafs all things considered.
The Leafs themselves had a pretty good run and only missed the playoffs twice during this sim (which includes the redo of the 2020-21 season that I skimmed over). During that four-year stretch, they won a combined eight rounds, advanced past the second round twice, and won it all as previously mentioned.  Considering they were one win shy of a second trip to the finals in Year Four, Toronto fans should be content with a strong half-decade of play from their hockey team.
In terms of Franchise Hockey Manager 7, I was a bit surprised by how slow the sim engine was with it taking much longer to get through a season when compared to EA Sports. I definitely enjoyed the amount of detail that was put into making the GM experience more in-depth and it was a lot easier to keep track of previous season results and stats, but it’s hard to ignore the amount of time spent waiting for the sim to get through a single campaign. This won’t dissuade me from doing future career sims using this game because I was overall happy with my experience using the game, but it’s something I’ll need to keep in mind going forward.
As I have mentioned in previous entries of this ongoing series, the results of the simulation should not be viewed as proof of what is going to transpire in the next five years because it is a video game that randomly generates results. My hope is that you enjoyed me taking a different approach to this series and using a game other than NHL 21 to determine the future of your favourite Leaf players. At the very least, I am confident that Tavares’ offensive output won’t make a sudden drop beginning with the upcoming season.
Uncategorized
Recent articles from Michael Mazzei