Frederik Andersen has been okay, and that’s probably not okay 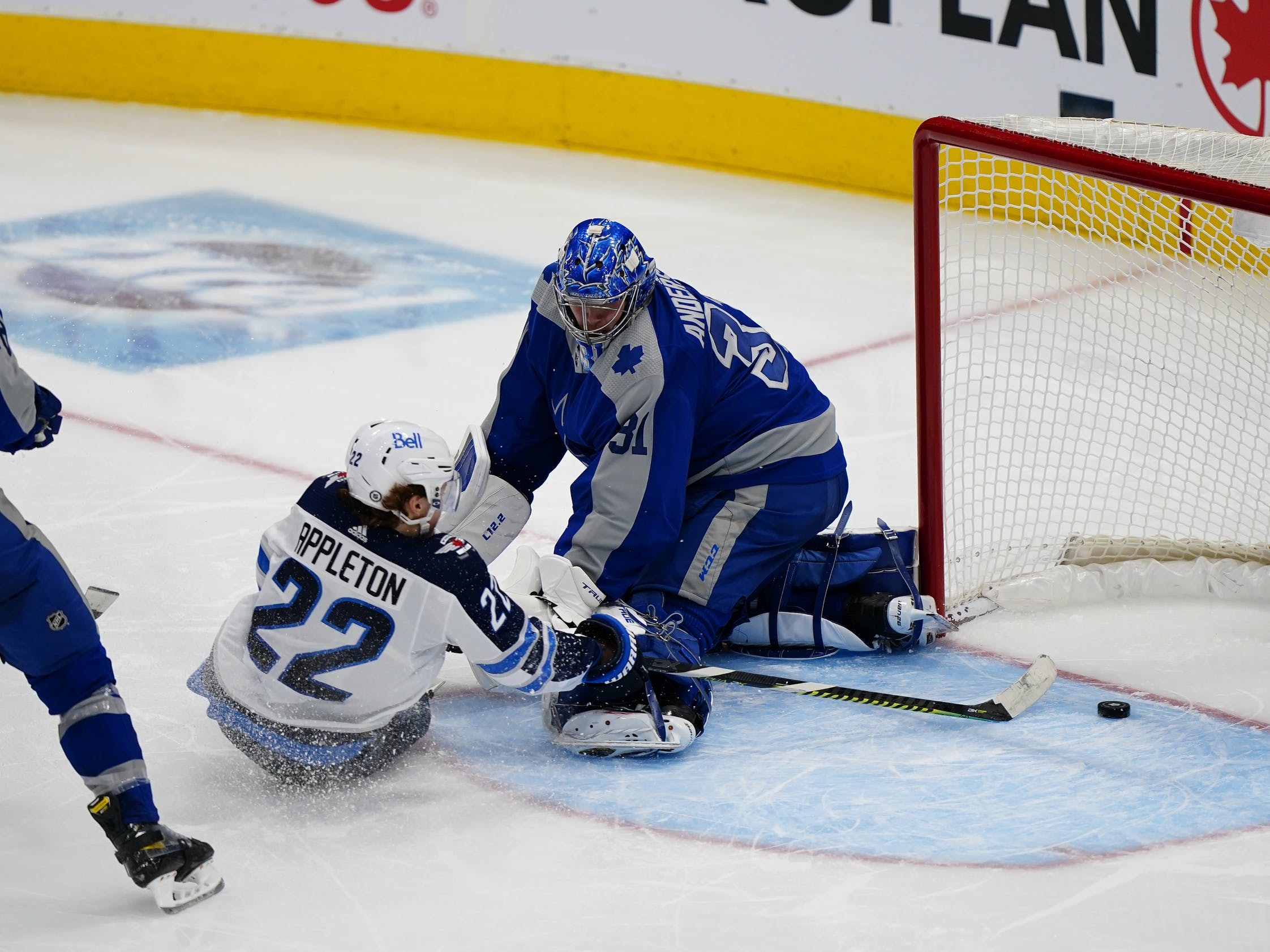 By Mark Norman
1 year ago
Ahh, how I did not miss this: the Leafs’ first extended losing streak of a season. Let’s all sit around Leafs Twitter and keep our hands warm on the flaming hot takes being thrown about in the immediate aftermath of this 18-7-2 team’s third-straight loss.
There was a considerable amount of criticism being thrown Frederik Andersen’s way last night and deservedly so for two reasons; (1) the Mason Appleton goal which made the game 4-2 early in the third period was an absolute backbreaker; and (2) Connor Hellebuyck showed us what it was like for a goalie to steal his team a hockey game, which is something the Leafs have sorely missed from Andersen in recent times.
I have a philosophy when it comes to evaluating goaltenders, which is admittedly subjective and simplistic: at bare minimum, save the shots you are meant to save. Anything above and beyond that would be considered a bonus: it’s what separates average goaltenders from great ones, and reliable goaltenders from the ones that make your stomach do flips when you see the opposition get a breakaway.
There was a time (before 2019-20) when I felt confident that the vast majority of shots thrown Frederik Andersen’s way would be capably handled. There was a reason the nickname Steady Freddy gained traction within the fanbase, just look at his save percentage in his first three seasons as a Leaf: 0.918, 0.918, 0.917. However, in recent years it feels like Leafs fans’ confidence in Andersen has waned as his play has become more erratic and less predictable. The recent save percentages speak for themselves: 0.909 in 2019-20 and 0.903 this season. This is no longer a blip: it is a 70+ game trend of below-average play. And he’s no longer saving the shots he’s meant to save.
Here is a 10-game rolling average view of Andersen’s save percentage during his time as a Leaf. If you focus on the 10-game segments where Andersen put up a higher-than-0.920 save percentage (above the green line), you’ll notice the drop-off over the last two seasons.

Nothing about this is surprising to those of us who have been paying attention: Freddy’s just not as steady as he once was. But can things be salvaged?
Let’s dive a little deeper and try to figure out what exactly is going on with Andersen this season. The following view of save percentage and goals-saved-above-expectation (GSAx) comes from my Maple Leafs Stat Pack dashboard, which I update the day after each Leafs game:

First, let’s focus on the promising signs: among the top 31 goaltenders in 5v5 TOI, Andersen is putting up really good results at 5v5, which is great since it’s the state at which 85-90% of all hockey games are played. Andersen is presently 10th in save percentage and 9th in goals-saved-above-expectation-per-60 when both teams have 5 players aside.
Where Andersen’s numbers have completely tanked is on the penalty kill: his 0.786 shorthanded save percentage has him ranked 29th among the top 31 goaltenders in SH TOI, and he’s presently allowing 3.74 more goals than expected for every 60 mins of penalty killing time, which lands him at 26th place among that same cohort. To be clear, it’s difficult to remain on the positive side of the ledger in shorthanded GSAx (just 10 of the 31 goaltenders have), but Andersen’s results are extremely poor.
A couple of things worth noting about Andersen’s GSAx/60; (1) we’re talking about an 89-minute sample; and (2) Andersen’s worst GSAx/60 while shorthanded prior to this season was -0.94 which is almost one-fourth of his current figures. His gaudy GSAx/60 numbers this season should regress with more playing time since it would be legitimately hard to remain that bad over an extended period of time.
The Leafs need to be better on the penalty kill if they’re to help Andersen to get back to league average, but the old adage still remains that your goaltender needs to be your best penalty killer, and the Leafs haven’t been getting that from Andersen: in far smaller sample sizes Jack Campbell and Michael Hutchinson are currently putting up 0.889 and 0.850 save percentages on the PK, to Andersen’s dismal 0.786.
So where does this leave us?
Simply put, this is the Leafs’ best shot at a deep playoff run in the Auston Matthews Era: we are in a division that no longer features titans like Tampa Bay or Boston and we’re getting tremendous value from our lowest-paid players to help counteract the high cost of our core. Matthews is shooting out the lights. The defence has never been better. We’re stacked with hungry veterans. But like ants at a picnic, nothing can ruin a good time like inconsistent goaltending.
Here is a quick table that shows the performance of Stanley Cup-winning and runner-up goaltenders for the last 5 seasons. It doesn’t take a expert mathematician to realize that Freddy’s current numbers do not stack up favourably against most of these goaltenders.

So we need more. Andersen is seeing the lowest number of shots per game of his Maple Leafs career, to go with goal support that ranks second in the NHL. Leafs skaters are doing their part: it’s time for Andersen to do better than just “okay”.
Because just “okay” is not okay, if the Leafs are serious about contending.
Uncategorized
Recent articles from Mark Norman