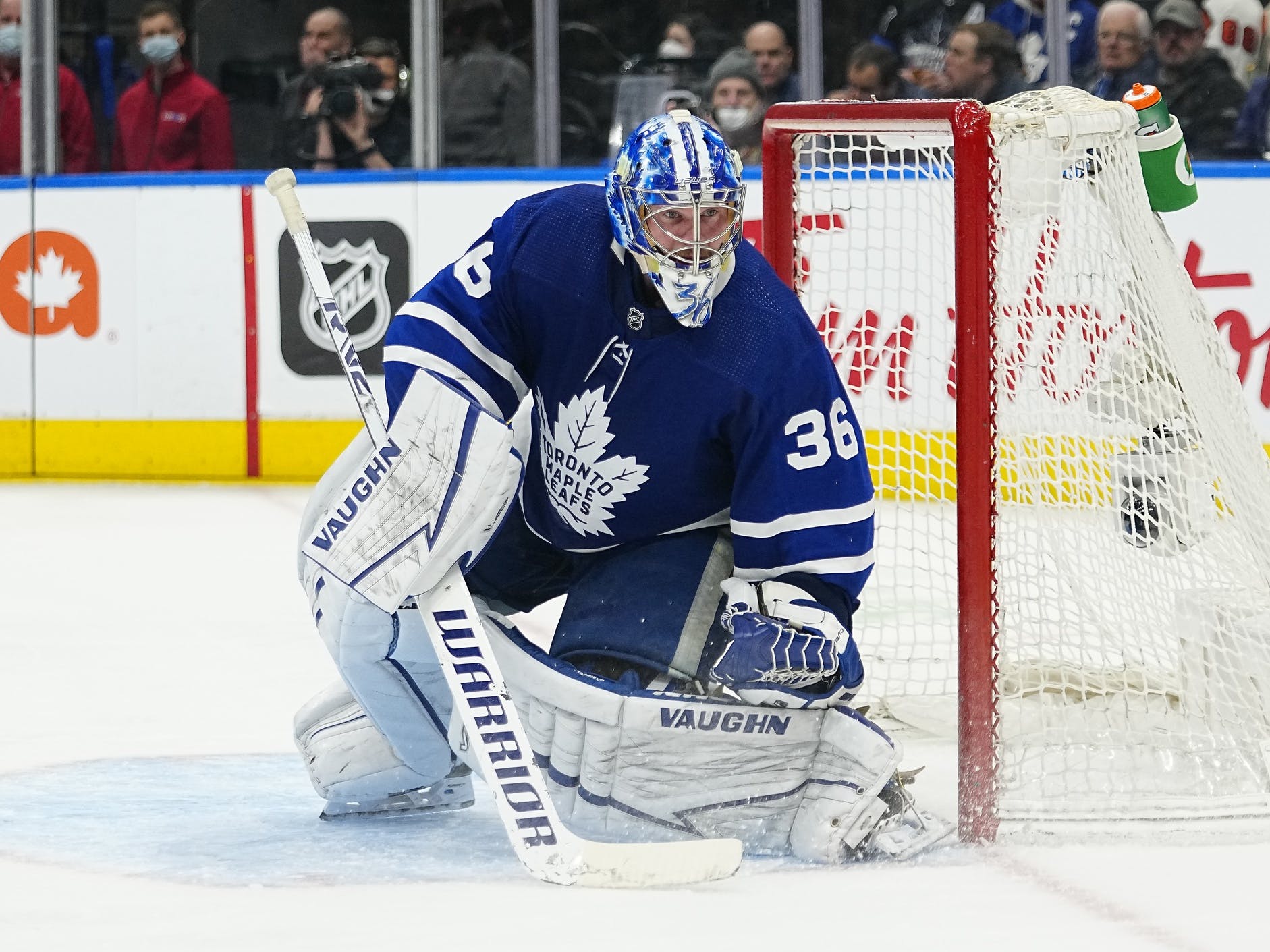 Photo credit:John E. Sokolowski-USA TODAY Sports
9 months ago
The Toronto Maple Leafs defeated another non-playoff team on Tuesday, handily defeating the Philadelphia Flyers 5-2 at Scotiabank Arena.
Given the low stakes behind the game with Toronto already securing their playoffs fate and without the services of star forward Auston Matthews, Sheldon Keefe once again put the team’s forward lines in a blender. Combine that with the fact that they didn’t hold a mandatory morning skate after a day off to prioritize rest, it didn’t come as a complete surprise that the Flyers outshot the Leafs 39-28.
But the extra rubber allowed Maple Leafs goaltender Jack Campbell to continue to find his groove, and that’s the biggest takeaway out of Toronto’s victory.
“He was locked in,” Maple Leafs head coach Sheldon Keefe said of Campbell. “He was excellent and it was great to see.”
The Leafs goaltender made 37 saves and posted a save percentage .949. The performance came two days after he made 27 of 29 saves in a 4–2 victory against the New York Islanders. It was the first time since victories on Jan. 1 against the Ottawa Senators and Jan. 5 against the Edmonton Oilers that Campbell posted back-to-back save percentages of over .930.
He looked like the goaltender that was unflappable in the first two months of the season. The goaltender that was .946 in that span and named to his first NHL All-Star Game.
“I think we’re rolling as a team and I’m right where I want to be,” Campbell said.
That place is top-goaltender form, something that was lacking from their starter.
Campbell’s performance issues in 2022 are well detailed. It hit a low point on Mar. 5 when he gave up five goals on 28 shots in a loss to the Vancouver Canucks.
“I promise I’ll get out of it,” Campbell vowed.
Days later, Campbell was shut down for nearly a month with a rib injury, opening the door for backup goaltender Petr Mrazek to take the net.
Signed to a three-year, $11.8 million contract this past summer, Mrazek, like Campbell, also struggled and at one point lost the net to rookie Erik Kallgren before getting it back, only to be shutdown for the remainder of the regular season with is third groin injury.
In Campbell’s absence the Leafs had a chance to address their goaltending situation at the Mar. 21 deadline but when it passed, the goaltending situation remained status quo.
But now that he’s back, Campbell is projecting a confidence that both he and the team need him to project. Toronto’s talent is undeniable up front and additions to their back end have appeared to stabilize the team’s overall play.
Goaltending is the wild card and Campbell has no choice but to perform well.
”He made huge saves throughout the whole game, it’s what he’s been doing for us all year,” William Nylander said of Campbell on Tuesday. “It’s nice to see him back healthy and making those big saves.”
Asked if he felt Campbell was ready for the playoffs, Nylander was unwavering.
”Of course.”
Shortly after Campbell’s victory against the Islander on Monday, Keefe was asked about Campbell’s workload and they weren’t sure at the time how it was going to go. But they were adamant that the rib issue Campbell had was in the past.
Now it’s just a matter of doing whatever Campbell is comfortable with, and whatever he needs to keep feeling the way he did after Tuesday is the ultimate priority.
With back-to-back games on Saturday and Sunday, Campbell is sure to sit one of those games. Apart from that, the reps are important as the goaltender builds to the postseason.
The Leafs need stability in goal for playoffs success and they need Campbell at his best. There really is no alternative.
POINTSBET IS LIVE IN ONTARIO