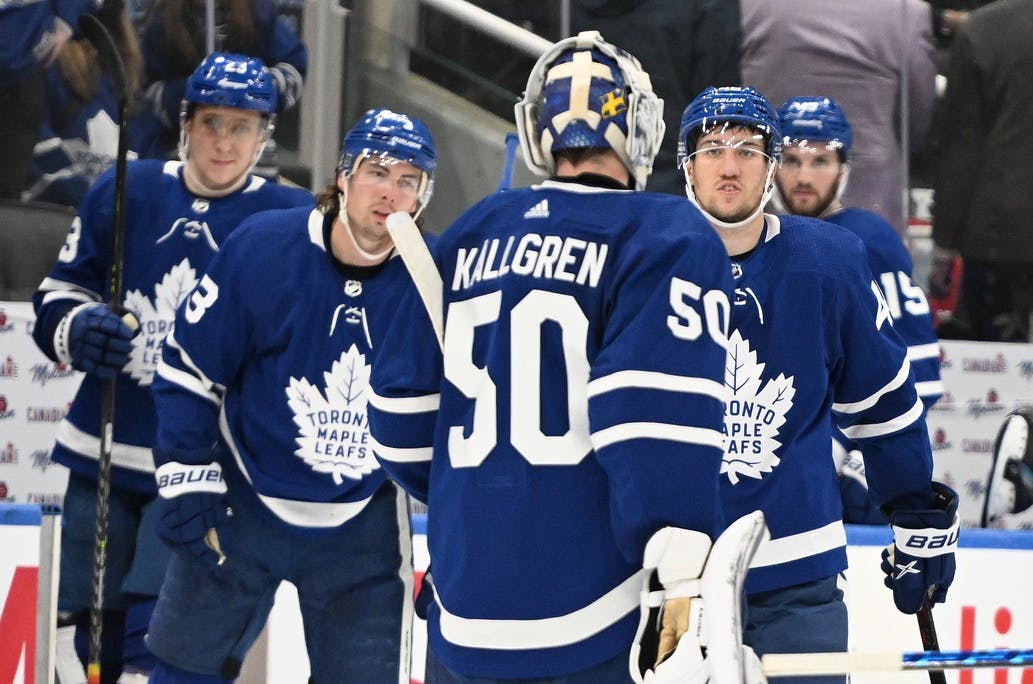 Photo credit:Dan Hamilton-USA TODAY Sports
10 months ago
When the Toronto Maple Leafs called up Erik Kallgren on an emergency basis, this wasn’t the emergency they had in mind.
With Jack Campbell out of the lineup for a minimum of two weeks with a rib injury, this was Petr Mrazek’s chance to go on a run and perhaps stabilize what has been a shaky situation between the pipes.
Instead, it was more of the same.
Mrazek allowed two awkward goals in the first period that put the Maple Leafs in an early hole. He was eventually pulled midway through the second period after allowing his fourth goal on 12 shots and made way for Kallgren to make his NHL debut.
From there, the Swedish rookie helped his team dig out a result, a 5-4 overtime loss against the Arizona Coyotes. He wasn’t tested often, but he looked solid in his nine saves in regulation and carried himself like a goaltender who had been at that stage before.
“For a guy going into the net in those circumstances, I thought he was excellent,” Keefe said of Kallgren.
Mrazek’s game, however, reflected much of his tenure with the Maple Leafs. He was aggressive and moved around a lot. Perhaps that was the cause for the awkward goals he allowed in the first period.
The first one was an awkward shot that hit the inside of his blocker. That allowed former Maple Leaf Alex Galchenyuk to bury home an easy tally just 2:09 into the game.
If that bounce wasn’t bizarre enough, Jakob Chychrun’s first of two goals occurred just when he fanned on a shot that somehow went past Mrazek. The goaltender dropped his stick at the very point where the puck slid in.
“I didn’t help the team get through the first period when the game could have easily been 0-0,” Mrazek said.
After the game, Keefe said had this been a normal situation he would have pulled Mrazek after those two goals, but he didn’t want to put Kallgren, the team’s fifth goaltender to play for the Leafs this season, in a difficult situation.
Arizona scored two more that weren’t necessarily Mrazek’s fault, but Keefe wasn’t in a mood to exonerate his goaltender completely.
“When you give up the first two, you can’t give up three and four like that,” Keefe said of the goals. “You’ve got to find a way to make the saves for us in that situation.”
During the second period, Mrazek once again experienced the Bronx cheers from the Scotiabank Arena crowd, clearly frustrated by team that has struggled to get strong starts from their top goaltenders lately. The crowd got livelier once the 30-year-old Czech goaltender was pulled in favour of Kallgren.
The cheers grew louder as they encouraged the rookie in a difficult situation.
“I tried to just keep my head clear and just embrace the moment,” Kallgren said.
It certainly wasn’t the way he probably envisioned his NHL debut would go. A relief situation after getting called up earlier in the day. Not expecting to play, he didn’t get a chance to notify his family in Sweden to stay up late to watch the game.
But perhaps all of that buildup and extra nerves that accompany a debut was gone and that played to his advantage.
Down 4-1 in the third period, the Leafs stormed back.
After Alex Kerfoot opened the scoring in the frame at 3:38. Auston Matthews scored his 44th goal of the season, although it took over a minute after he scored it for it to get confirmed. He beat Coyotes goaltender Scott Wedgewood but play resumed. It wasn’t until the horn sounded around the arena that indicated a call from the NHL’s war room that the crowd knew what was going on.
They erupted at the sound of the horn and it was one-goal game.
William Nylander, who was demoted to the fourth line to start the game, tied just 10 seconds later.
“The crowd was great,” Kallgren said. “I think that fourth goal was one of the loudest roars I’ve heard. They pushed me and cheered me on, it was really nice to see.”
Kallgren made a big kick save on Shayne Gostisbehere in overtime but he was beaten by Chychrun when the Arizona defenceman scored his second of the game. Not before he held Matthews’ stick which went uncalled.
Matthews let the officials have it after the game.
“I felt what I felt,” Matthews said about the situation, but didn’t provide any other comment.
The Leafs have allowed four or more goals in five straight games for the first time since Mike Babcock’s last five games as coach of the Maple Leafs in 2019. Keefe deflected as much as he could about the goaltending issue by stating that the organization made a commitment to Mrazek in the off-season. But the team has been on a slippery slope for a while.
Now they have an outdoor game coming up on Sunday in Hamilton when they ‘visit’ the Buffalo Sabres at Tim Horton’s Field.
And when asked if he was tempted to give Kallgren a chance to go on his own run here amid Mrazek’s struggles, Keefe didn’t dismiss the notion.
“With the time he was in the net he made out team feel comfortable,” Keefe said of Kallgren. “What this means for our team going forward? Obviously, he doesn’t have a great deal of experience here, but we need to find some stability going forward.”
News