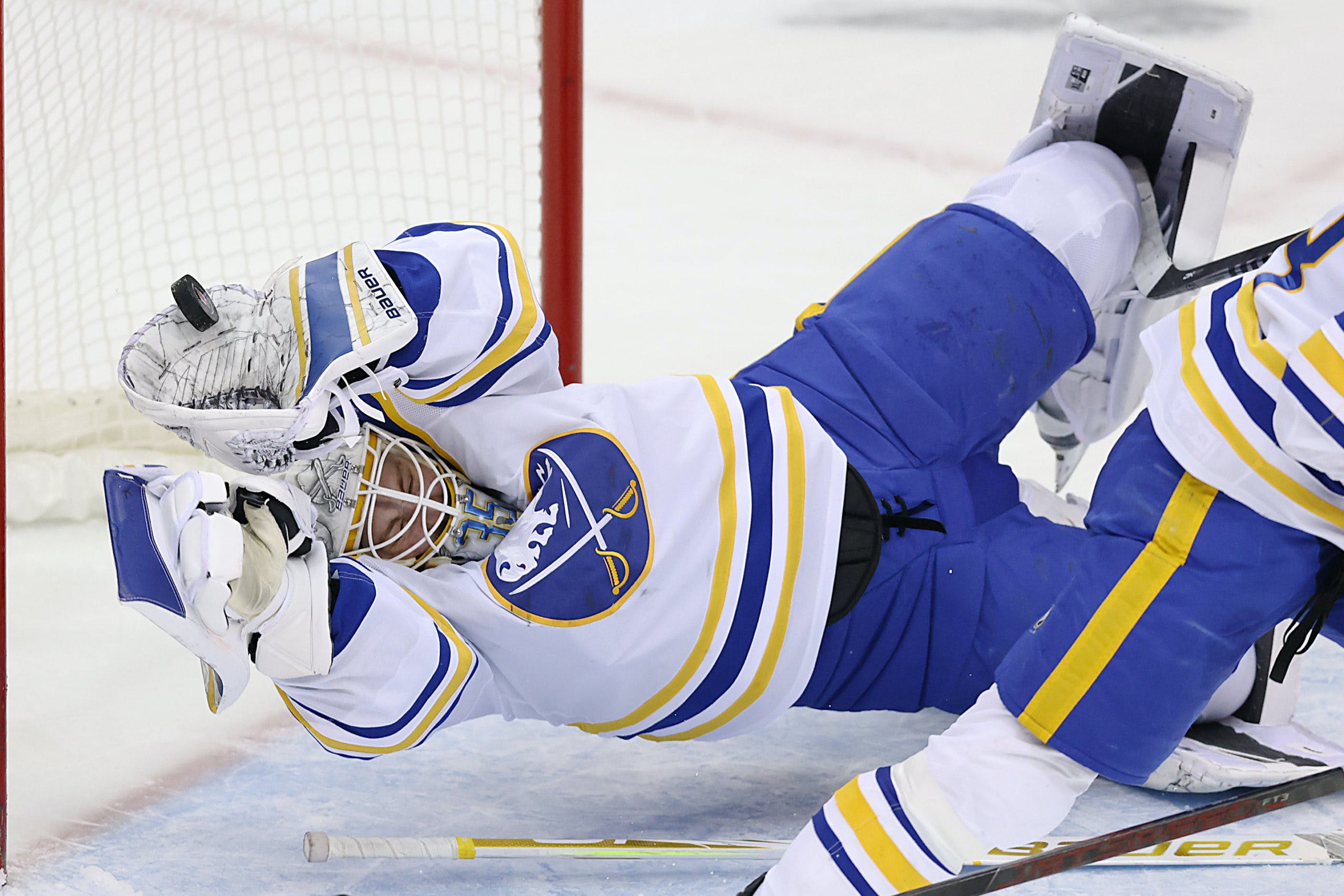 By Jon Steitzer
1 year ago
The Leafs aren’t looking for a goaltender, you know, except for when they are absolutely calling teams looking for a goaltender.
Elliotte Friedman joined Craig Rivet and Andrew Peters on their radio show in Buffalo to drop this little tidbit that the Leafs are interested in @Linus Ullmark, the $2.6M, soon to be UFA, goaltender with a .920 save percentage in Buffalo this year. Yes, .920 in 15 games for a team that has just 7 wins on the season.
How Ullmark fits into the Sabres season, and their bizarre 18 game losing streak is interesting given that he had the last win before the streak began, lost in overtime the following game, and was injured for the majority of the month of March. He then lost in his first game back, but put up a .917 save percentage in that return, lost in overtime the following game, and picked up the win to end the streak on the strength of him having a .969 save percentage that night. So somehow over the last 20 games for the Sabres, Ullmark’s appearances had a record of 2-1-2. This is a pretty encouraging case for exploring Ullmark, other than the Leafs should be a little concerned about bringing in another goaltender who has struggled with injuries this year.
Honestly, I’d probably try to lock up Ullmark if I’m the Sabres, given that he might be one of their few bright spots on the year, but there is the small matter of him being an unrestricted free agent heading into the summer, and I can’t imagine players that can choose their landing spot are in a rush to choose Buffalo, now more than ever.
Not surprisingly when you compare anyone to Campbell’s small sample size they don’t match up, and compared to Andersen’s season that has been a disaster 2/3rds of the time, Ullmark looks like a potential saviour. If the truth is that Ullmark is a reasonable tandem option to go with for Campbell for the rest of this year and if the audition goes well, he can be brought back at a reasonable price next year as well, that’s not a bad option to pursue.
Given that the Sabres will likely be heading into a fairly aggressive rebuild (again), they probably aren’t too hung up on a sending a solid goaltender over to the Leafs because they are nowhere near worrying about what their 2021-22 division rivals will be doing.
As for the Leafs, Elliotte Friedman mentions in his radio hit that he can’t see the Leafs looking to give up a 1st for Ullmark, but thinks that if Andersen is out for the year there is the potential that teams will be looking to gouge the Leafs on their goaltenders. The reality of the situation is that there seem to be plenty of goaltenders to choose from if you are a playoff bound team in need of one, and gouging isn’t something that is going to pan out too well. If Dubas is patient, he can add a goaltender without paying a premium.
As much as adding a goaltender seems like a given to most Leafs fans, there are complications. The Leafs seem hellbent on giving Freddie Andersen a chance as long as he can get healthy. And while the loyalty to Andersen might be appreciated by some, this year more than any other seems like it is time to hedge Toronto’s bets. Loyalty is great, but could also be the Leafs undoing, but even if they see that, they still need to figure out what becomes of Andersen’s contract, one that eats up a lot of annual cap space, but has very little salary still left owing on it.
When we’ll learn more on Andersen’s injury is anyone’s guess. For us impatient types now would be great, but while the Leafs may be considering make some moves before the actual trade deadline, it seems like the decision on what to do with their goaltending will be decided at the 11th hour on April 12th.
Stats via Hockey Reference, Natural Stat Trick and salary info via PuckPedia
Uncategorized
Recent articles from Jon Steitzer