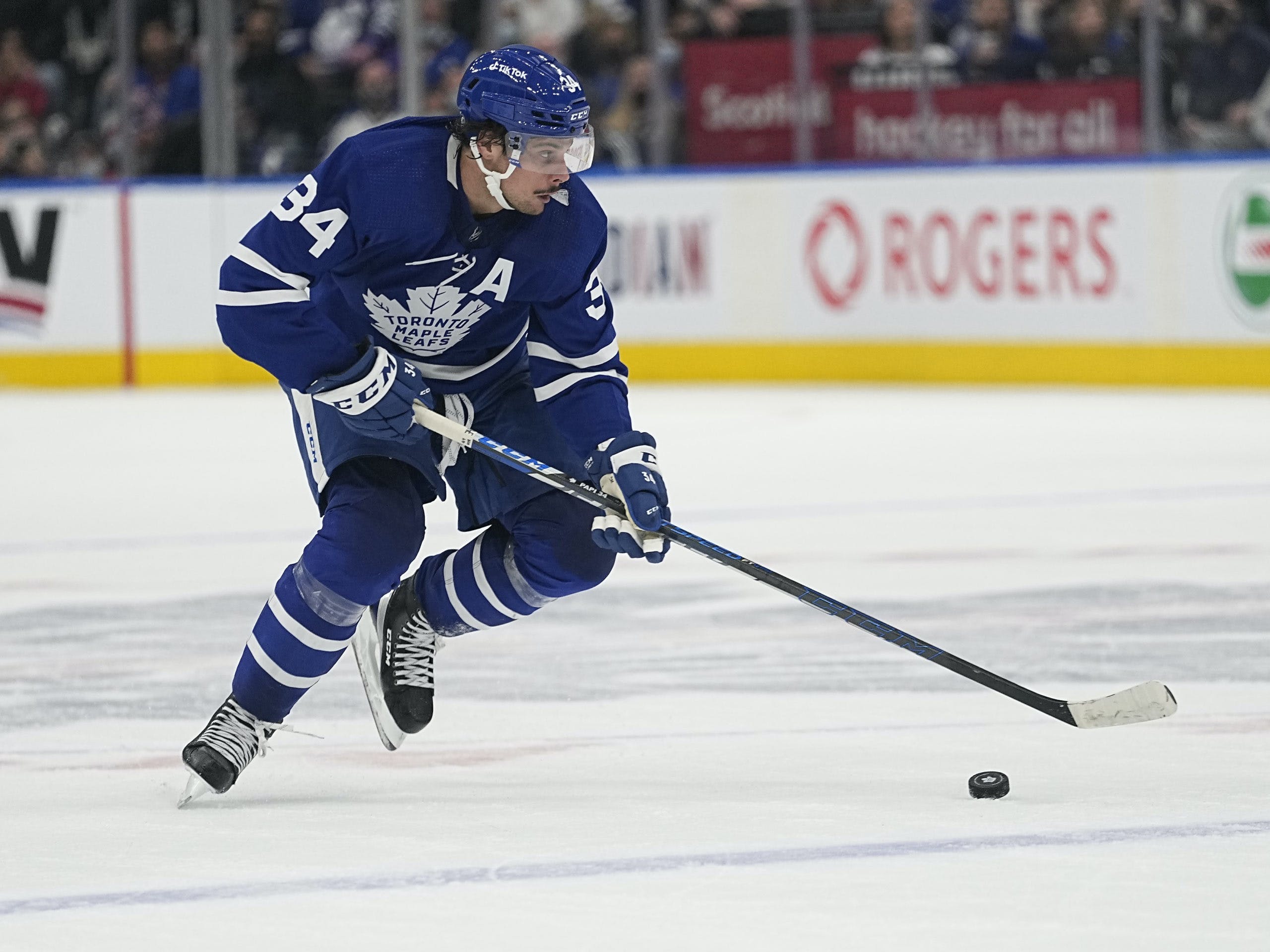 Photo credit:John E. Sokolowski-USA TODAY Sports
9 months ago
Toronto Maple Leafs forward Auston Matthews said he’ll be ready to play for his club when they begin their three-game road trip out west, beginning on Thursday against the Calgary Flames.
“I was a bit shaken up, it all just happened so quick,” Matthews recalled. “Fortunately, (I was) just kind of was able to calm down and everything checked out well.”
Matthews left during the third period of the Maple Leafs’ 4-3 overtime win over the Carolina Hurricanes on Monday when he was inadvertently hit on the side of the head by Hurricanes defenceman Brett Pesce.
There was good news on Tuesday when Maple Leafs head coach Sheldon Keefe indicated that Toronto’s star forward didn’t appear to be seriously injured by the time his club team left Scotiabank Arena following Monday’s game.
“I felt fine that night and felt fine the next day and throughout today,” Matthews said. “I think just talking to the medical team, there was no hesitation to jump in practice today and just be right there at it.”
Matthews said he felt just a bit of soreness on the side of his head but that was it.
The Scottsdale, Arizona, native scored twice on Monday and reached the 30-goal plateau in a season for the sixth time in his NHL career. He has 31 goals this season and will look to add to his total as he chases down New York Rangers forward Chris Kreider for the league lead (33 through games completed Feb. 8, 2022).
“Obviously he just looks like himself out there today ready to go and be the dominant player that he is,” Maple Leafs captain John Tavares said. “I think we’re all thankful that he’s healthy and looking good and responding well.”
Although Matthews appears to have the all-clear, the same isn’t the case yet for defenseman Jake Muzzin. The veteran defenceman spent the last two days of practice in his regular spot on the second defence pair. The club is still waiting for clearance from medical ahead of Wednesday’s game against the Calgary Flames.
“He looks good and he looks like himself,” Keefe said of Muzzin. “I think there’s a couple of things when you’re coming off of a head injury you’re dealing with that, and there’s the fact of just getting comfortable on the ice again.”
Muzzin missed the last seven games with a concussion he sustained against the St. Louis Blues on Jan. 15. Following Tuesday’s practice, he was skated hard by the team’s coaching staff. These types of drills are done to see how a player with a head injury feels following full exertion.
The fact that Muzzin was back at practice on Wednesday and was preparing as if he was able to play was a positive sign, but a determination on his status against Calgary won’t be made until Thursday.
Wayne Simmonds was absent from practice and Keefe explained it was because he and his wife gave birth to the family’s second child. U of T forward Kyle Potts filled in while Simmonds was absent.
The bruising forward will not accompany the team as they fly to Calgary on Wednesday. If Simmonds doesn’t join the team for the game on Thursday, the club may have to do some manoeuvering with their roster due to tight salary cap restrictions.
One option for the Leafs, should Muzzin be cleared, is to go with 11 forwards and seven defensemen, a tactic the club used a few times during the 2020-’21 season. Or they could send down a player like Timothy Liljegren and call up another forward.
More from theleafsnation.com
News