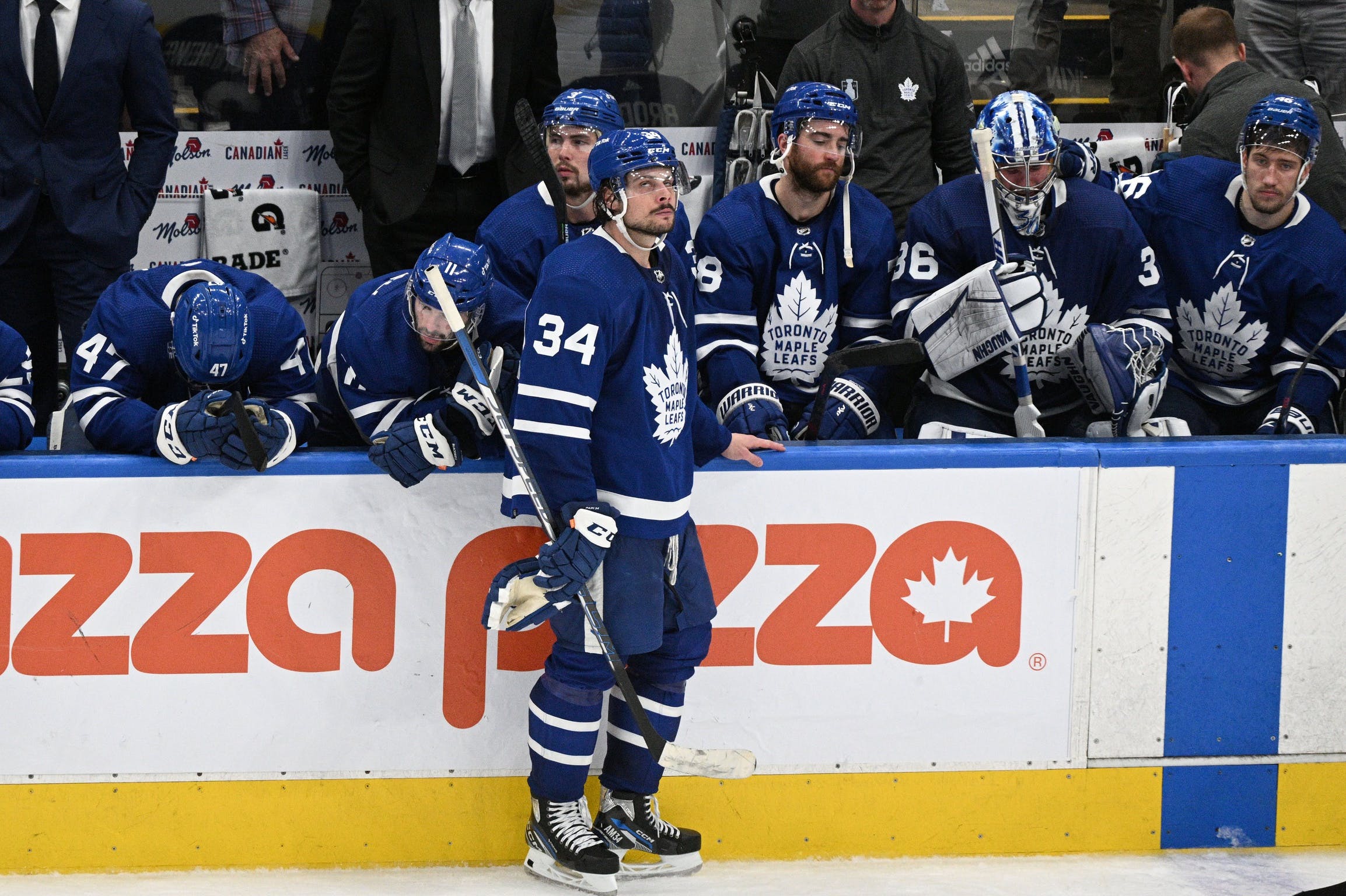 Photo credit:Dan Hamilton-USA TODAY Sports
6 months ago
Now what?
That’s the question the Toronto Maple Leafs are left to answer after falling to the Tampa Bay Lightning 2-1 in Game 7 on Saturday.
After a franchise record 54 wins and 115-point season, the Maple Leafs appeared set to write a new chapter in the playoffs. When they drew the two-time defending Stanley Cup champions as their opening-round opponent, they were eager to measure up against the best.
And despite what was a very close series, the Leafs found themselves on the losing end, again.
Another opening-round playoff defeat.
“At the end of the day, we didn’t accomplish what we wanted to accomplish,” Maple Leafs captain John Tavares said.
It’s the sixth consecutive opening-round exit for a team that hasn’t won a playoff series since 2004 and the pain is compounded by the fact that they held leads 1-0, 2-1, and 3-2 in the series, along with many opportunities in the overtime of Game 6 to close it out.
But the champions already have it figured out, while challengers have to find a way.
In the end, they just ran into a better, more-refined version of themselves.
“They’ve got all the pieces,” Lightning forward Steven Stamkos said of the Leafs. “They have everything, it’s just that we have everything, too.”
Heading into Game 7, the Maple Leafs never wavered in their confidence. They came out with a lot of energy, buoyed by a full-capacity Scotiabank Arena crowd, who were treated to their first Game 7 at home since Apr. 20, 2004.
Toronto got out to a great start and had a 5-1 shots advantage before a power play for Tampa in the second half of the first period evened things out.
The Lightning opened the scoring late in the period when Nick Paul picked up a rebound from Ross Colton’s shot for a 1-0 lead.
In the second period, the Leafs though they had the equalizer when Tavares appeared to score in the slot, but Justin Holl was called for interference away from the play.
Toronto tied the game when Auston Matthews found Morgan Rielly pinching in from the blue line at 13:25.
But Paul scored his second of the night minutes later when he skated around TJ Brodie before firing the puck past Jack Campbell.
Seconds before Paul’s second goal, Andrei Vasilevskiy made his biggest save of the night.
Mitch Marner found Matthews at the blue line and Vasilevskiy raced up to the top of his crease to stop Matthews’ scoring chance.
With an .885 save percentage through the first six games of the series, the 2021 Conn Smythe Trophy winner had struggled to find a rhythm.
He found it against the Leafs in Game 7 by making 30 saves, with 17 of them in the third period.
The Lightning were the No. 1 team during the regular season in defending one-goal leads in the third period and and hung on despite 33 shot attempts in the final frame.
”That’s sort of the hallmark of their game,” Maple Leafs head coach Sheldon Keefe said of the Lightning, who will now go on to face the Florida Panthers in the second round.
And thus ends a season with a lot more questions than answers.
”The feeling is the same and the outcome is the same,” Morgan Rielly said. ‘Whether it’s different, that’s going to take some time to figure out.”
There was a lot at stake for core players to step in this series after last year’s debacle. After combining for just one goal between the two of them against the Montreal Canadiens, Matthews and Marner combined for six in this series.
”We’re right there,” Matthews said.
The type of opponent provided little consolation for Marner.
”We’re getting sick and tired of feeling like this,” he said.
Perhaps there will be less of a call to make radical changes to the group, but there are many who will want some in some form or fashion.
While the Leafs played well and earned the respect of their opponents, the fact remains that they didn’t get the job done.
“We’re certainly earning respect in the league,” Keefe said. “But we’re not in the respect game, so we have to find a way to do that.”
More from TheLeafsNation.com
POINTSBET IS LIVE IN ONTARIO