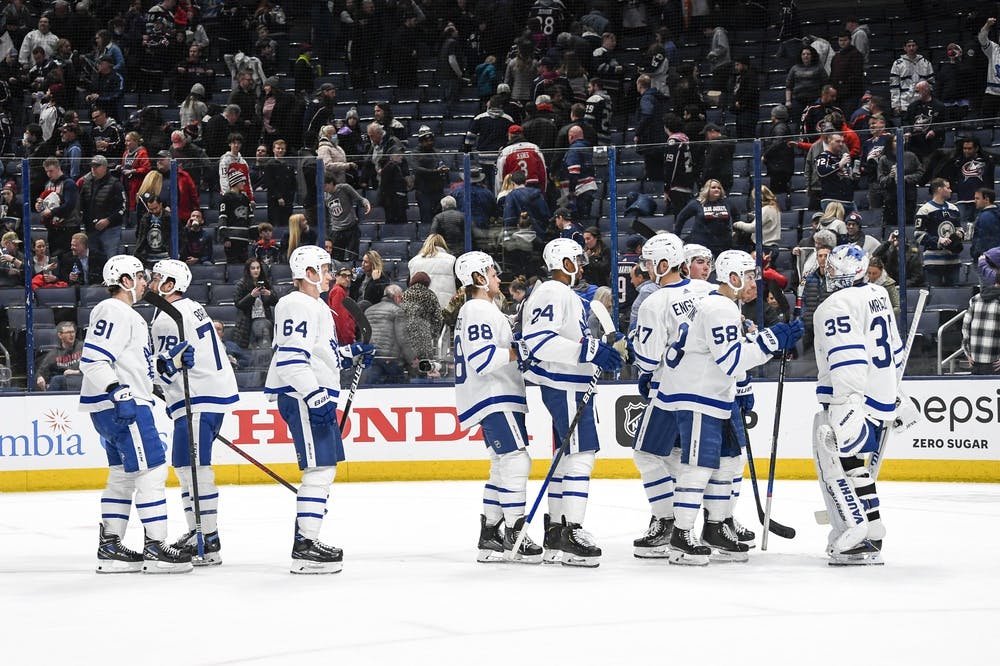 Photo credit:Gaelen Morse-USA TODAY Sports
10 months ago
COLUMBUS, OH — Auston Matthews became the first player to hit the 40-goal mark in the NHL this season and Michael Bunting recorded his 20th goal in his ‘rookie’ campaign as the Toronto Maple Leafs hung on to defeat the Columbus Blue Jackets 5-4 at Nationwide Arena on Monday.
But it was the strength of their top line that helped carry the day, as they have done so consistently this season.
Outside of that dynamic line, defence and goaltending issues that have plagued the team as of late haven’t gone away.
The Maple Leafs skated to near perfection in the opening 20 minutes against the Blue Jackets, who played their third game in four nights. Toronto led 3-0 after goals from Ilya Mikheyev, Mitch Marner and Matthews.
After Mikheyev opened the scoring, Matthews helped set up Marner’s goal by putting in a masterclass in puck retrieval in the offensive zone. He thwarted a couple of clearing attempts by the Jackets and that allowed Marner to eventually cash in to make it 2-0.
“I think just that shift really got us going as a line there and just generated some positive momentum for our team,” Matthews said of the play.
He then scored his 40th goal of the season after he came from behind the net and backhanded a shot past Blue Jackets goaltender Elvis Merzlikins for a 3-0 advantage.
Toronto dominated with a 77 percent expected goals rate and a 79 per cent Corsi in the first period, according to NaturalStatTrick.com. They also allowed goaltender Petr Mrazek to see the puck and keep the level of difficulty in front of him at a minimum.
“Obviously that first period was as good as we could ask for,” Maple Leafs coach Sheldon Keefe said.
It didn’t carry over to the start of the second period when the Blue Jackets mounted a comeback and it came by way of a tipped shot, the kind of goal Keefe stressed to avoid in an effort to help his goaltenders.
Sean Kuraly tipped a shot from the point by Zach Werenski that beat Mrazek at 1:45.
“That’s a downer on the game for me,” Keefe said of the goal. “We weren’t able to build on that (first period) so that was disappointing.”
Oliver Bjorkstrand cut Toronto’s lead to 3-2 when he was left all alone at the net as Toronto defenders Morgan Rielly and Timothy Liljegren both cut to the opposite side of the ice.
In the third period, Jack Roslovic scored on the power play to tie the game up 3-3.
Toronto managed to get the lead back for good when Alex Kerfoot, who played most of the game on the fourth line, beat Merzlikins with a shot of the corner bar and into the net.
Bunting provided a needed insurance goal when he batted away at the puck for his 20th goal of the season. There was some debate as to whether it would be his goal or if Matthews got it.
It ended up staying as Bunting’s goal as of this writing.
Toronto’s top line of Bunting, Matthews and Marner have been the most consistent element of the Maple Leafs, especially over the course of the last month. The trio have combined for 40 points in the last seven games.
A remarkable feat for Bunting, who is classified as a 26-year-old rookie. After bouncing around the lineup, he’s found his fit and the team has him at a salary-cap hit of $950,000 through the 2022-23 season.
“There hasn’t been a second of doubt really here for quite some time, in terms of his ability to perform on that line and be a consistent contributor,” Keefe said of Bunting. “And I say consistent contributor because that’s what he is. Of
course he’s benefiting by playing with Auston and Mitch, but those guys are
benefiting playing with him as well.”
Patrik Laine scored on the power play with Toronto’s net empty to bring the game within a goal, but Toronto hung on to win.
“A win is a win right?” Pert Mrazek said after the game. “That’s what matters the most and that’s what we came here (for) and that’s what we’re taking home. So, I’m happy with that.”
The Czech goaltender bounced back after a 5-1 loss to the Buffalo Sabres last week. But he still posted a save percentage below .900 with 31 saves on 35 shots.
It’s an important win for the Maple Leafs, who avoided a three-game losing streak after losses against the Sabres and Vancouver Canucks. And while you probably shouldn’t look 100 duck-sized gift horses in the mouth (see the team’s TikTok), Toronto’s effort did little to quell some issues that have lingered with the club as of late.
Matthews is deserving of all the high praise he has received. While he’s on pace to win the Maurice ‘Rocket’ Richard Trophy at his torrid scoring pace, he’s also deserving of all the talk surrounding the Hart Trophy.
Marner has established himself as a goal-scorer again after his inability to put a puck into the back of the net had been a recurring theme this season.
And Bunting (whose salary cap hit is just $950,000) has been a revelation. His 20th goal put him past his Leafs predecessor, Zach Hyman, whose cap hit is nearly six times as much as Bunting’s ($5.5 million).
But the defensive and goaltending issues remain. And there wasn’t a single performance from anyone on the back end or from Mrazek that was enough to convince you that they have things figured out.
Jack Campbell will get that chance when he suits up against the Seattle Kraken on Tuesday. Until then, the Maple Leafs’ strengths outperformed their weaknesses on Monday and there is lots to figure out between now and the NHL trade deadline on Mar. 21.
More from The Leafs Nation:
News