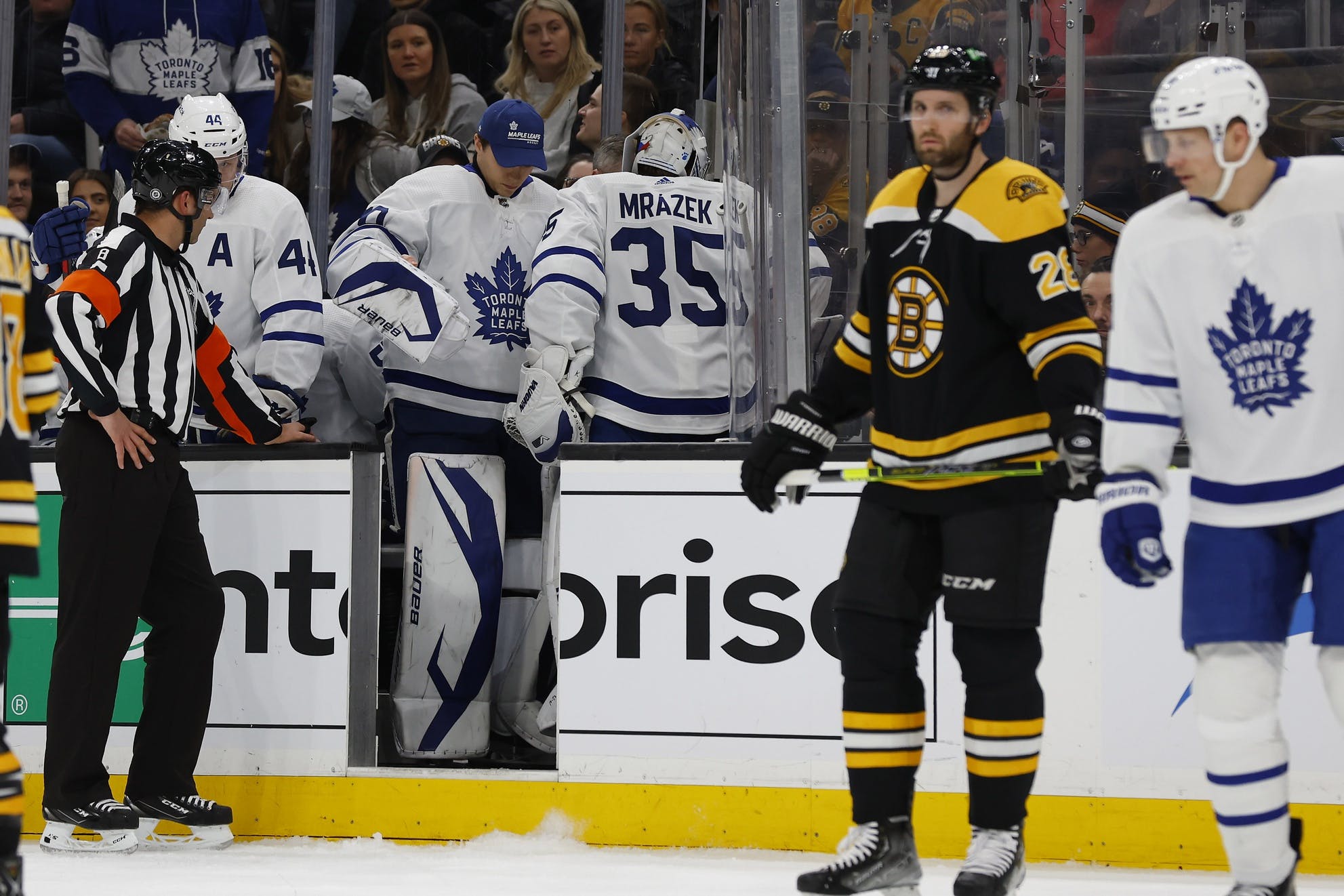 Photo credit:Winslow Townson-USA TODAY Sports
10 months ago
Toronto Maple Leafs goaltender Petr Mrazek is expected to be out of the lineup for six weeks, pending another physical evaluation, head coach Sheldon Keefe said on Thursday.
Mrazek injured his groin in the first period of Tuesday’s 6-4 win against the Boston Bruins. It was the third time this season that the Czech goaltender injured his groin.
Erik Kallgren came in to play in relief of Mrazek and picked up his fourth victory of the season. The Swede will be the starting goaltender when the Maple Leafs host the Winnipeg Jets in their final game in March.
It’s expected that Mrazek will go on the long-term injured reserve (LTIR) once they get final confirmation on the severity of his injury. Once that occurs, that will give the Maple Leafs an additional $3.8 million to add to the team’s LTIR pool. The added room will give the team some flexibility to manoeuvre around their roster, including finding enough space to activate defenceman Jake Muzzin and his $5.625 million salary-cap hit.
Muzzin skated as an extra at the morning skate and it’s expected he will join the team for the upcoming four-game road trips which kicks off this weekend.
Toronto called up Michael Hutchinson from the Toronto Marlies to back up Kallgren when the Leafs host the Winnipeg Jets on Thursday. Jack Campbell has been out since Mar. 8 with a rib injury but will practice with the team on Friday. He’s “on the cusp” of returning, according to Keefe.
The Leafs will be without defenceman Ilya Lyubushkin on Thursday. The Russian sustained a head injury after he took a punch to the head from Bruins forward Taylor Hall on Tuesday.
Hall was fined $5,000 by the NHL Department of Player Safety for his actions, but avoided suspension
“I didn’t think it was a clean play,” Auston Matthews said of the Hall hit on Lyubushkin. “That’s not up to me, that’s up to George (Parros) and the Player Safety stuff.”
Keefe confirmed there were some lingering symptoms from the incident for Lyubushkin and that he’s considered day-to-day. The defenceman worked on some skills and conditioning exercises with Skills Development Consultant Nik Antropov before the team’s morning skate.
Justin Holl was the third Leafs player injured during the game in Boston on Tuesday, but is healthy enough to play against the Jets.
Lyubushkin has been a solid defensive partner for Morgan Rielly over the last seven games. With the Russian not available, Rielly will be reunited with TJ Brodie, while Mark Giordano moves up to the team’s second pair to skate with Holl.
“He’s been excellent, both Giordano with Liljegren and Liljegren with Giordano,” Keefe said. “Not it gives us a chance to look at some different things.”
Carl Dahlstrom will play in just his second game with the Maple Leafs. The defenceman made his debut in a 3-1 win against the New York Islanders on Jan. 22 and logged 12:30 of ice time. He’ll skate on the third pair with Liljegren.
Dahlstrom played 15 games with the Jets during the 2019-20 season where he recorded one assist and averaged 14:45 of ice time.
More from The Leafs Nation
News