The Arizona Coyotes seem like ideal sellers for the buyer Leafs 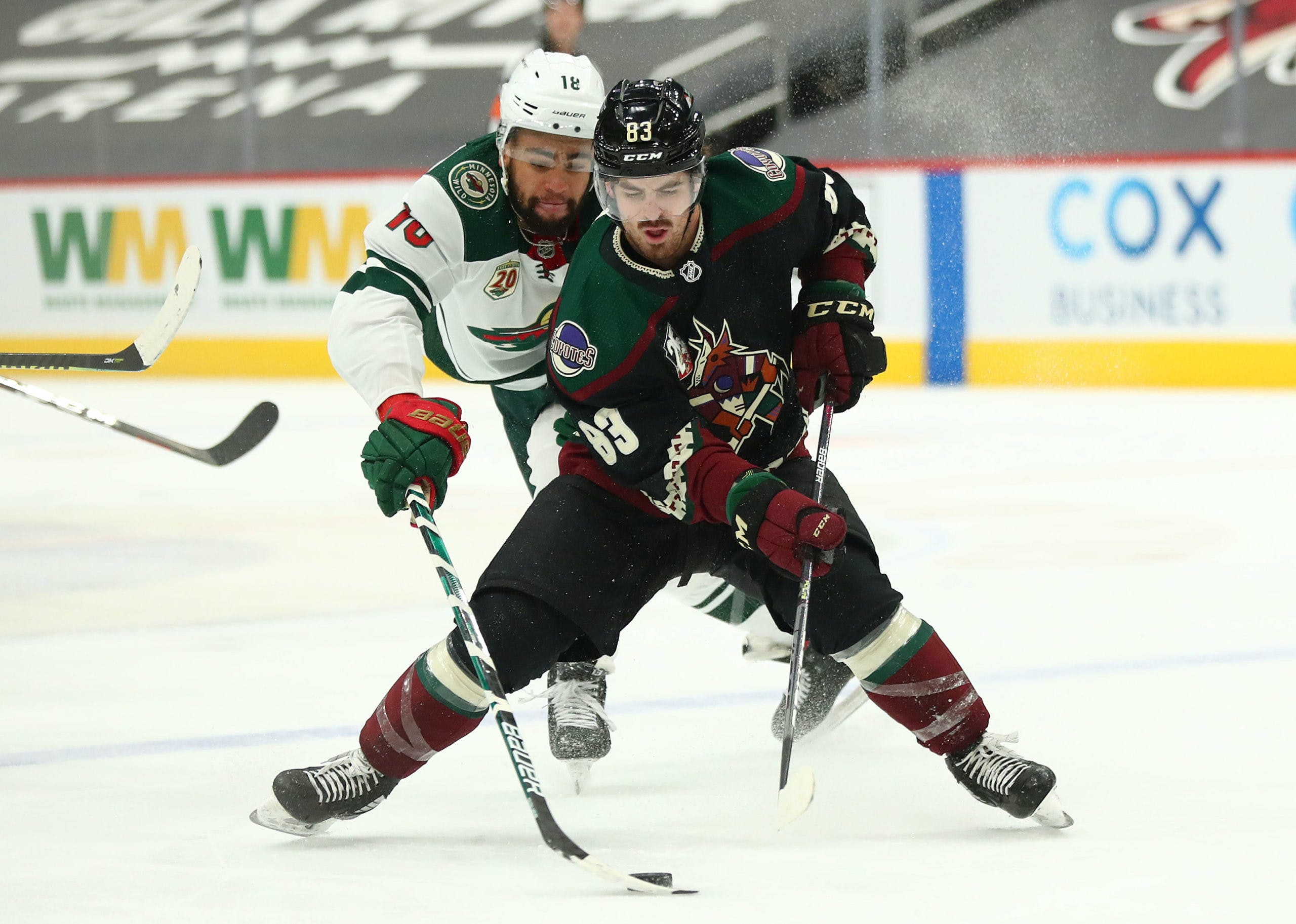 By Jon Steitzer
1 year ago
If there seems to be one consistent thing about the Arizona Coyotes, they always seem to have an interesting collection of pieces, but none of them ever seem to fit together. Or they are broken. No one does injuries quite like the Coyotes do, and that’s probably their greatest undoing, besides ownership, management, coaching, etc, but health definitely seems like it’s in the top four. While this continues to be bad for Arizona hockey fans (is it plural? I never know), it has the potential to be good for the Leafs, who should be interested in a few of the players on the Coyotes.
Here are five options worth considering from the Coyotes:

The fact that Garland is available, or at least teams are asking about him is interesting. He’s certainly priced right for Arizona at the moment, but all that changes in a few months when he’s an arbitration eligible restricted free agent. He’s certainly been performing for Arizona, his 25 points in 30 games is good enough to lead the team, and his 9 goals put him behind only Clayton Keller’s 10 for the team lead there too.
So that’s why this tidbit from Sportsnet’s Headlines came as a shock:

“I’m hearing Arizona’s been asked about him,” Sportsnet’s Elliotte Friedman said Saturday during the Headlines segment on Hockey Night in Canada. “And it’s not something I think they really want to do, but if the offer is big enough that it allows them to restock, I think they’re going to at least consider it.”

Garland has been a steady improver over the past three seasons in the desert, and while he might be more of the same for the Leafs offensive core (an undersized, none physical winger), he addresses some of the fire power issues and allow for a more balanced attack throughout their lineup.
There’s also the matter of Garland being an affordable re-signing in the summer that might allow for a more expensive asset to be flipped without sacrificing offensive depth, or at the very least the Leafs would hold Garland’s rights and be able to trade him for an asset rather than acquiring an unrestricted free agent that would walk for nothing after the playoffs.
Garland is an interesting option and at $775k, he fits the Leafs price point perfectly. I wonder if Toronto sees Garland as the ideal fit for giving up a top prospect since they’d be gaining back a young(ish) talent in return.

Now there is nothing saying Lawson Crouse’s name is out there in trade rumours, but as far as Leafs targets go, he’s a name I feel I need to bring up as often as I can. Crouse adds a lot of the physical elements to the lineup that are missing from pretty much every player not named Wayne Simmonds on Toronto. He’s priced right at $1.53M, and his actual salary jumps next season, according to PuckPedia, to $2.25M including a $500k signing bonus, which is small potatoes to the Leafs, but not nothing to the Coyotes.
The biggest issue with Crouse is that his performance is down this year with only producing 1 goal and 2 assists in his 28 games. That’s not good. What is good is that Crouse was a 15 goal scorer last season, and he had 11 the year before. The ability to be a physical net presence type player is there and I remain optimistic the Leafs could get him on the cheap.
None of the underlying numbers on Crouse are encouraging in anyway, but he’s not really the player you look at to improve the team in that regard. He’d be supplementing an otherwise strong possession team, that has been decent at suppressing shots, with someone who finishes his hits, and is an immovable force in front of the opposition’s goaltender. If he doesn’t pan out, the good news is he probably didn’t cost you a lot.

Darcy Kuemper is presently injured and listed as week to week. That’s less than ideal, but could work for some cap creative solutions. If the Leafs acquire Kuemper and keep him on the LTIR until the end of the season and activate him for the playoffs when the salary cap no longer applies, well then you’ve got yourself a decent goaltending option, and one that can be your starter next season for a decent cap hit as well. The only challenge then becomes whether the Leafs can sneak both Kuemper and Campbell past the Seattle Kraken in the expansion draft, but that’s looking a ways down the road.
There’s also the risk associated with going with a 30 year old goaltender with a long term lower body injury, because Leafs historians will note that is exactly how the troubles with Frederik Andersen began, and while Kuemper’s recent history has been stellar, it just takes one significant injury to a goaltender to alter their outputs.
Like acquiring any goaltender, Kuemper is a risk, but he’s one worth noting since the Leafs should be considering some new options in net.

Speaking of injured goaltenders, here’s one of the goaltenders with the most unfortunate recent injury histories in the game. Raanta has been great when he’s played, he has save percentages about .915 in 6 out of the 8 seasons he’s played (6/7 if you exclude his rookie year), but despite those solid numbers he’s only played more than 40 games in a season once, and last year might have been his best case scenario playing in 33 games, and being more limited by the performance of Kuemper than his own body.
With Kuemper injured now, Raanta is struggling to stay healthy, but in his 10 games this year he has posted a .916 save percentage which would be god tier in Toronto. He’s not going to have much of a price tag attached to him as he’s a pending UFA, and again gives the Leafs at least another option to try in the short term, and an option to consider for next season as well if they like what they see. Raanta’s $4.25M cap hit is probably the biggest barrier to a deal, as getting the Coyotes to retain any kind of salary is an uphill battle, though a swap that includes Andersen for Raanta would save the Leafs some cap space and result in the Coyotes paying less salary given that most of Andersen’s salary has been paid in signing bonuses.

There isn’t any shortage of rental options in Arizona if you are looking for forward depth, or quality defensemen.
@Derick Brassard and @Drake Caggiula highlight the cheap forward depth options. If the Leafs want to cheaply replace Vesey and Boyd, here’s a way to do it.
@Jason Demers and @Niklas Hjalmarsson are both defensemen that have been connected to the Leafs in the past. Hjalmarsson’s ability to play either side would be helpful, but the decline of his prime abilities probably put him more on par as Ron Hainsey type now, than a true top four defender. Demers is a solid offensive option, that moves the puck cleanly, and could also compliment the Leafs in some way. Of course if the Leafs want a tank, the very affordable @Ilya Lyubushkin is also an option, and might be a good fit for a playoff roster.

Who would the Coyotes want?

Well…
A big part of why I like the idea of trading with the Coyotes is they have the cap space to be a dumping ground for @Frederik Andersen’s contract if the Leafs choose to go that route. The Leafs paid Andersen $4M of his contract as a signing bonus, and what is left of the $1M owed to him is manageable for the Coyotes. No matter the the deal, if the Leafs are looking to lose salary this avenue should be explored.
Of course that isn’t really what the Coyotes want, that’s just another Leafs want buried in this section. The Coyotes want cheap players with some upside attached to them. Players like Barabanov would be appealing, if he had term, someone like Dermott would absolute be a great fit for the Coyotes, and arguably so would someone like @Pierre Engvall. When we’re talking Connor Garland, I could imagine that Liljegren and Robertson’s names could come up, and players like Duszak, Kivihalme, and Brooks who are all either under contract or pending RFAs could be of interest for some of the UFA rental players.
What the Coyotes want most though is a chance to get back into the draft, even if it’s not a great draft. Not having a first round pick as a non-playoff team is a big deal, as you’ll remember from the darkest days of Leafs fandom. Being able to make their own selection in the first or add to their collection of 2nd round picks would potentially get their prospect system back on track, and given that is the area of management Bill Armstrong has focused on for most of his career, he could put an additional premium on draft picks.
While Connor Garland might be a pipedream, he’s an interesting name for the Leafs to consider as a big target, especially since they wouldn’t necessarily need to limit themselves to him. The fact that the Coyotes also have goaltending, depth, and physicality options makes me wonder if there is a match here. There doesn’t seem to be a shortage of selling teams this season, but fewer have the same desperation for futures and the cap space to absorb Leafs salaries like the Coyotes do. They are certainly a team to watch as the deadline approaches.
What do you think? Who would be your Coyotes target? What would you want to send back? Should the Leafs consider a Kessel return? Let us know in the comments below.
Uncategorized
Recent articles from Jon Steitzer