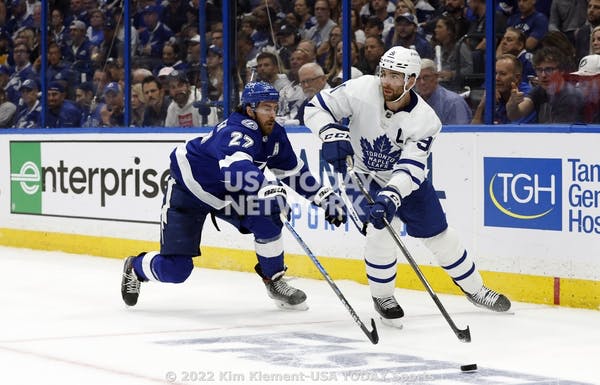 6 months ago
TAMPA, Fla. — The Toronto Maple Leafs were close to that feeling of playoff success.
That was until Tampa Bay Lightning forward Brayden Point scored the winner late in the first overtime to defeat Toronto 4-3 and force a deciding Game 7 in Saturday in Toronto.
“Loved how we played in overtime, We attacked, we had chances, plenty of opportunities to finish it and really gave them nothing, until they had the look and they made good on their one look. That’s the difference.”
Toronto had nine shots on goal in the overtime session compared to five from Tampa.
Heading into the second period, it looked as thought the Maple Leafs were going to get the job done.
After going down 2-0, Toronto managed to battle back with three consecutive goals to erase that deficit for the second consecutive night. They were in the driver’s seat with a one-goal lead until they took two high-sticking penalties just 15 seconds apart.
The latter of the two penalties issued to Kerfoot, came with some controversy as it appeared like Tampa’s Victory Hedman helped in raising the the Toronto forward’s stick.
Tampa’s Nikita Kucherov tied the game with the 5-on-3 advantage.
“Unfortunate the way it went in the third period but I thought we regrouped well,” Maple Leafs captain John Tavares said. “[We] had the looks in overtime, unfortunately we weren’t the ones to cash in on our opportunities.”
The Leafs were down 1-0 after 20 minutes at Amalie Arena on Thursday. The Lightning opened the scoring by taking advantage of a turnover caused by Maple Leafs forward Alex Kerfoot. Tampa’s Ondrej Palat intercepted Kerfoot’s drop pass that was seemingly intended for Leafs defenceman TJ Brodie and Palat beat Leafs goaltender Jack Campbell on the breakaway for a 1-0 lead.
Tampa added to their lead after Anthony Cirelli scored a shorthanded goal at 10:46 of the second period.
Toronto’s comeback started less than a minute later.
Auston Matthews deflected a point shot from Mark Giordano that beat Lightning goaltender Andrei Vasilevskiy.
Toronto then scored twice in the final minute of the frame.
Jason Spezza batted his stick at Tavares’ shot at the net to tie the game 2-2 at 19:26.
Tavares scored after a drop pass at the net from William Nylander 26 seconds later to give the Leafs the lead.
When the Maple Leafs concluded their regular season and learned they would face the defending champion Lightning in the first round of the playoffs, Keefe embraced the challenge.
”The harder, the better,” he said.
Now it will go to Game 7, the very game that has haunted the Maple Leafs in their four playoff series dating back to the epic collapse that occurred exactly nine years ago.
But the attitude has changed for the Maple Leafs.
“What’s in the past is in the past man, we can’t change that now,” Matthews said. ”It’s about this next game and going out there with a purpose, and with details, and just competing for 60 minutes or whatever it takes. We just gotta put our balls on the line and go for it.”
Matthews’ statement speaks of an urgency from Toronto to get the job done. Jobs will undoubtedly be on the line should they fail.
But the one thing on their side is they will be at home.
Last year, Toronto played in front of just 500 essential service workers. They couldn’t hear their support as the loud sound of fake crowd noise drowned out the real people in attendance.
But it’s going to be a full barn on Saturday night. It’ll be the first time the club plays in front a packed house at home since Apr. 20, 2004 when they defeated the Ottawa Senators in Game 7.
Of course it’s going the distance.
But it was never going to be easy.
“We have a great opportunity on home ice, Game 7, do or die, win or go home, and we should be excited about that opportunity,” Matthews said.
IMore from TheLeafsNation.com
POINTSBET IS LIVE IN ONTARIO