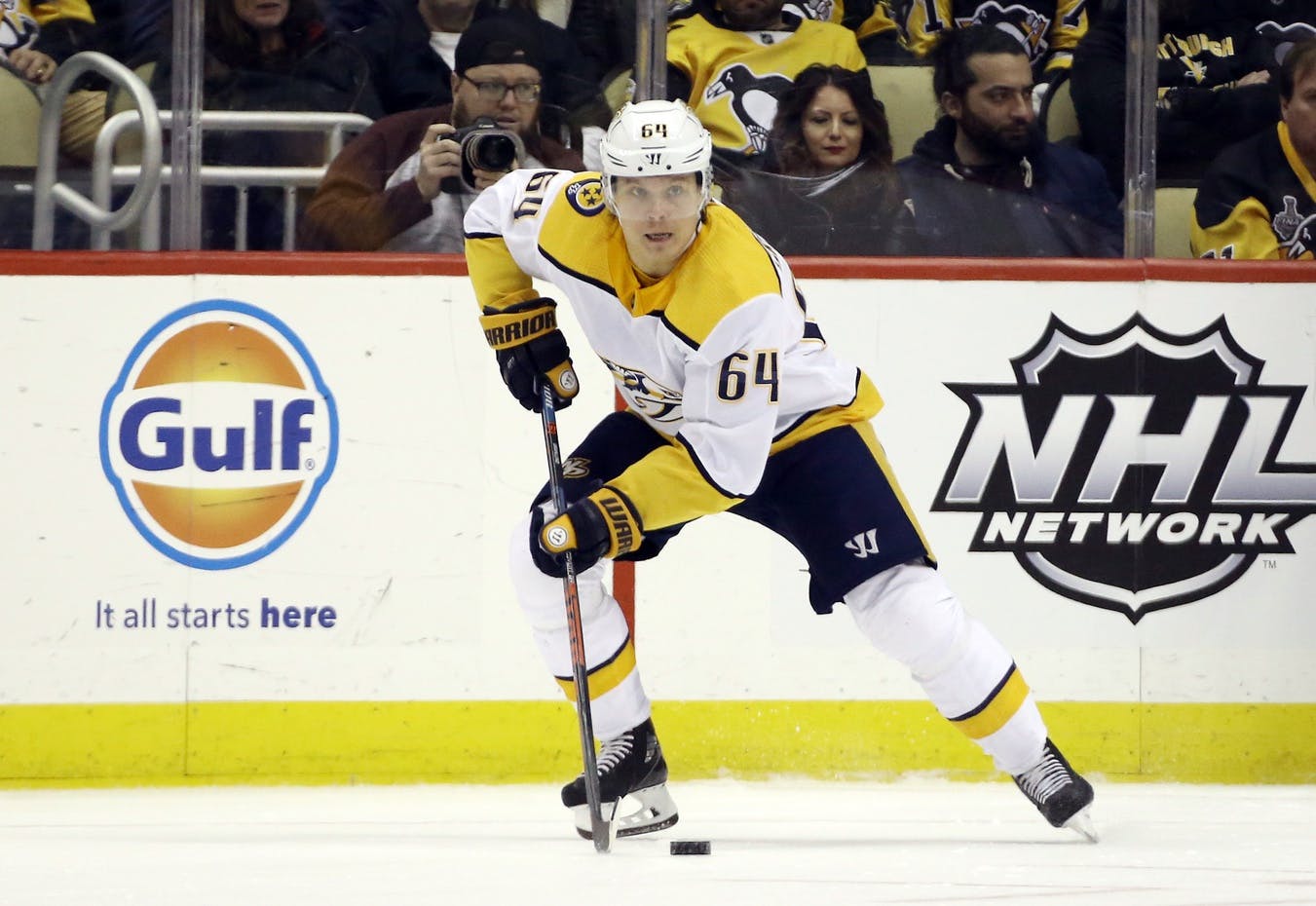 By Jon Steitzer
1 year ago
There doesn’t seem to be much escaping the idea that Mikael Granlund is the primary target of Kyle Dubas over the next month and a half leading up to the trade deadline. This really seems to mirror a lot of the past Dubas key acquisitions as there was plenty connecting the Leafs to Muzzin, Clifford and Barrie well in advance to the deal being completed. When Dubas starts working on something, it seems he wants to finish it, and with that in mind, it’s probably a good idea to wrap our heads around the three big questions.
As best as I can, I will attempt to answer those questions.

What do we know about @Mikael Granlund?

Well, on a less than good Nashville Predators team, Mikael Granlund is presently being utilized as the top line center. That’s not to say he’s their top center, that’s to say he’s interchangeable with Matt Duchene and Erik Haula, and he might work better with Filip Forsberg than the other centers. The most important takeaway from this is that Granlund has been playing as a center this season, as previous few seasons saw Granlund utilized as a winger. The idea of bringing in another interchangeable C/LW who can play in the middle six part of the Leafs forward group has a lot of appeal.
The next thing that stands out for Granlund is his cost. At $3.75M he isn’t as cheap as the Leafs would ideally like him to be so that presents somewhat of an issue. At 50% retained the $1.875M cap hit is much more workable for the Leafs, but requires a willingness from the Predators to spend money some money for the Leafs to sweeten their offer. There’s also the matter of how sweet should the Leafs make their offer on a rental player in what looks to be a lackluster trade market, but we’ll get into that more on the next question.
As for the player that Granlund is, well, his numbers align with being a pretty decent top six player, but not exactly the top line player the Predators are utilizing him as. This season he has 9 points in 19 games, with only four coming at even strength. Last season he had 30 points in 63 games, but the fact that 17 of those points were goals is somewhat encouraging. Goal wise, in a full season it’s reasonable to expect him to hover around 20, and points wise he’s shown he can hit 50, though we have to take this season and last as a sign those days could very well be over.
This season out of necessity we’re seeing an increase in TOI for Granlund, as he’s averaging 19:34 minutes a game, up from his steady career average of 18 minutes a game. He’s been utilized on the power play and the penalty kill throughout this season, and while the power play usage has been common throughout Granlund’s career, this year represents an upswing in penalty kill time, although Granlund has been an occasional penalty killer throughout his career.

Looking at Granlund’s numbers from last year, he falls on better part of the league for both performance and contract value. He’s a play driver, not to the extent of players like Matthews or Nylander, but as a third line option, a secondary option within the top six he adds value. He’s also been a reasonable shot suppressor, although this year he has struggled, both due to the fact that Predators aren’t a particularly good team, and that Granlund is doing the heavy lifting in matchups as a first line center, a role the Leafs would certainly not look to use him in.
Granlund doesn’t bring much in the way of physical presence, and at 5’10 he’s not imposing his will on any of his opponents, but he is a strong two way player, something that with the growth of Matthews and Marner this season, along with players like Tavares, Hyman, Kerfoot, Mikheyev, and Engvall, the Leafs have infused more of into their lineup. Granlund supports the team defense approach that has grown over the season, while providing more of an offensive option that the Leafs have been getting from players like Kerfoot, Mikheyev, and Engvall.
It’s easy to see how Granlund could fit in to the Leafs top nine, and if things were to go well on the Leafs it’s also easy to see how Granlund could be a player the Leafs bring back, which would be a rarity for a Leafs rental player. While Granlund might not be the most exciting name to have pop up in the rumour mill, there’s no doubt that he could be a sensible fit for Toronto.

What would it cost the Leafs to get him?

While we’ve known that Toronto was interested in Granlund for a while, last night’s edition of TSN Insider Trading was the first time we’ve had any idea of what the Preds are looking for in return.
From Darren Dreger:

Could there be a fit moving forward between David Poile and Kyle Dubas, well perhaps, if the Nashville Predators are willing to retain some salary. Look, Toronto has the prospects, and if necessary have the draft picks to make something like that happen. As long as the Leafs continue to win, then I know Dubas is going to try and bolster the group up front.

So that’s not really a surprise of what the target would be when we’re talking about a team that very much looks like they are throwing in the towel for this season, and potentially heading into a rebuild. The Leafs do have prospects, although I’d hope that players like Robertson, Amirov, Sandin, and Liljegren aren’t being considered options on a rental. And certainly not on Granlund, as their value to the team currently could even outweigh what Granlund is worth. As such, I’d hope that we’re not talking about a first round pick either, even if salary is retained by the Predators. It’s doubtful the trade market will be that competitive and the Leafs should not be paying that kind of premium for Granlund. So let’s put dial it back to starting to look at the second tier of prospects or a second round pick as the focal point of any trade.
There is also the matter of the Leafs needing to move some salary off their roster, and the names that stick out the most in that regard are Alex Kerfoot, Pierre Engvall and Ilya Mikheyev, players that ideally you want to keep for the purpose of having a certain level of depth heading into the playoffs. In the case of all of those options aside from Kerfoot, there would still potentially be a need to shed salary some additional salary or go with a strict 20 man roster and forego having a scratched player for flexibility. The Leafs cap situation certainly complicates things, and it almost feels like an injury would be required to give them the salary relief they require to make a move.

If the trade happens, when does it happen?

Well first and foremost the Leafs would need their salary cap stars to align in order to make it work, and if you are waiting for the best case scenario on when that will be, that is always going to be the trade deadline. Potentially once the Leafs are healthy and running a 20 man roster and banking whatever savings they can, they can make up enough of a difference to bring in Granlund without doing much more than removing a depth player from their lineup and putting him on the taxi squad. The Leafs aren’t there at all and expecting the injury situation to conveniently clear up isn’t something Toronto should bank on. There is the potential they can use injury relief to their advantage at some point to bring Granlund in, but they aren’t in that situation at the moment, and no one is going around wishing injuries on the Leafs.
That brings us to when the optimal time is for bringing Granlund in for the Leafs, and given what we’ve seen in Dubas’ early in season trades, his preference tends to be to act before the deadline, and it’s likely as soon as he has the deal he’s happy with, and the ability to pull it off, he’s going to pull the trigger.
That said, there isn’t the same pressure to act quickly this year. The Leafs are doing well enough with their current roster, they aren’t needing to add someone to go for first place, or worse off fight for a playoff spot, they are already sitting in the idea position. Adding Granlund at the deadline and waiting for 14 days to bring him in is manageable, except for that rather large issue of it being a good idea to get Granlund playing with the Leafs prior to the final days of the season. If the Leafs acquired Granlund at the trade deadline he would only be eligible to play in 7 games for the Leafs before the playoffs. That’s also something worth factoring in to any consideration for what is reasonable to play in acquiring a player. Is seven games of regular season hockey and the playoffs with a second round pick?
If the Leafs want Granlund acting sooner than the April 12th deadline makes sense, and that’s why the dates circled in my head are March 14th and March 19th. Making a trade on March 14th or March 19th means that Granlund would miss only five of the Leafs games. Missing the minimal number of games is important because the Leafs will be responsible for Granlund’s cap hit on the roster while needing to dress a replacement for him.

If the Leafs are truly going to make a move for Granlund, I hope that it is in the mindset that they see him as a potential upgrade for beyond the 2021 season. I can’t imagine the price will be as cheap as any of us would be comfortable with, and the schedule realities are if they made the trade for him today we’d only get 26 games of Mikael as a Leaf. Which is pretty decent for a rental, but if we wait to the ideal date of March 14th, that already puts it down to 21 games that Granlund could play as a Leaf.
Depending on who the Leafs have to move in order to make the deal work is obviously the deciding factor on how any of us will feel about whether we are for or against this transaction, so at this point it seems that Granlund’s name is a very important one to know and a player to watch over the next month.
Uncategorized
Recent articles from Jon Steitzer