Advertisement
Ad
Leafs Postgame: You’ve Got To Be Mac-Kidding Me 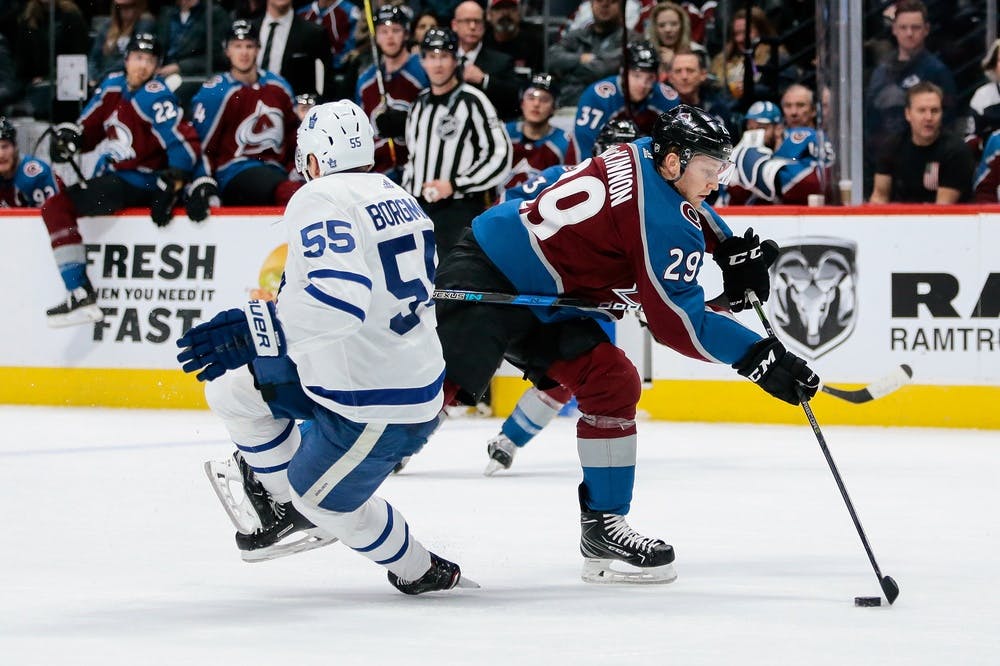 By Ryan Hobart
5 years ago
Comments
The Maple Leafs were in Denver tonight facing the Colorado Avalanche. Post-Matt Duchene, the Avs are looking to bring about positive change and growth with a re-tooling and an insurgence of previously-acquired youth, like Compher, Raantanen, Jost, and Zadorov, and newly-acquired youth, like Girard, Yakupov, and Kerfoot.
The lines tonight for the Avs and for the Maple Leafs can be found on DailyFaceoff.com.
Notably, the Leafs were without Curtis McElhinney tonight, who was put on Injured Reserve earlier in the day. The newly acquired goalie, from the Vegas Golden Knights, Calvin Pickard was called up to be his replacement. Pickard has played 86 NHL games, all with the Avalanche, the team who drafted him.
Additionally, the Leafs were missing Nazem Kadri, who may have suffered a neck injury, or possible concussion, in the last game against Arizona.
The Leafs have won 6 of their last 10 games, and sit at a +21 goal differential and a 50.02 “Corsica Adjusted” CF% for the season. The Avalance, similarly, have won 5 of their last 10, but with a -3 goal differential and only a 48.3 “Corsica Adjusted” CF% this season. Simply put, the Leafs should have had an advantage here.
Advertisement
Ad
Advertisement
Ad

The Leafs, and Calvin Pickard, would not get off to a good start this night. Nathan MacKinnon picks up a soft rebound off an on-net dump-in on Pickard, and buries a goal.
The Leafs would claw back, though, with a great rush from the 4th line: a controlled dump in from Leivo that Martin can easily recover, then a great effort by Martin to center the puck which hits off the Avs defender and in:

https://platform.twitter.com/widgets.js
That would be all for the 1st, ending 1-1 for the Leafs.

Once again, the Leafs were beaten by the Avalanche 1st line, lead by MacKinnon, who sets up Mikko Rantanen to give Colorado the 2-1 lead.

Early the 3rd, the Avalanche again pulled ahead of the Leafs, this time on a team mental lapse on defense that left Kerfoot wide open.

With the goaltender pulled, James Van Riemdsyk is able to bury a loose puck in front, off the post and in.

JVR ties it up with 2 minutes remaining!

The period ended tied 3-3, and the game would head into overtime.

After Connor Brown takes a penalty to prevent a Nathan MacKinnon breakaway, JT Compher would capitalize for the Avalanche by scoring a floating shot that beats Pickard in overtime.

Walk in. Let it rip. Win it in @EASPORTSNHL OT.@Jcomph7, everyone. pic.twitter.com/E5ZrhhMTqb

The Leafs are back in action on New Year’s Eve at 3:30 PM ET, against the Vegas Golden Knights.