Person 2: “I don’t know. I mean, maybe you’re right. He has been on some really poor Sens teams though.”

Person 1: “Nope, he’s terrible. The numbers say he’s always been getting crushed in shot-attempt share, and he’s 26 now. He is what he is, a sub-replacement-level.”

Person 2: “It’ll be interesting to see if he can turn it around in a different role in Toronto. He’s not a bad skater and offensive skills seem okay. They must see something in him.”

I’ll admit I’m being a bit of an ass in my portrayal of a hockey argument here, but this is more or less the type of conversation that happens almost-daily on social channels and it obviously isn’t limited to the NHL. But hockey is what we’re going to focus on, because this is a hockey site.

People pay lip service to the idea that there is no real “analytics vs eye test” war still ongoing, and that’s probably mostly true. But I do think it’s taken on a different form, and one thing I’ve been continually getting hung up on in recent months is the lack of balanced opinions out there when it comes to evaluating players and teams; A complete turn away from embracing the ambiguity that comes with trying to get a handle on this game. [It probably doesn’t help that I just read the book Range, where the main argument is that narrowly-focused experts aren’t all they’re cracked up to be.]

Take hockey stats people’s numbers as info but not their opinions on players. (I’m joking…sorta) pic.twitter.com/1JnrDB1nIp

I think a glaring example of this partially-blinded approach (and I won’t call it narrow-mindedness because it’s not the same thing) is when players go on waivers that would supposedly be difference-makers in 30 other cities. The most recent cases of this involved the wire today, where notable past draft picks like Josh Ho-Sang and Daniel Sprong were left unclaimed after being cut from their teams yesterday.

Two mediocre teams decided these guys weren’t in their plans, then the rest of the league agreed.

To which people said: But the heat maps. 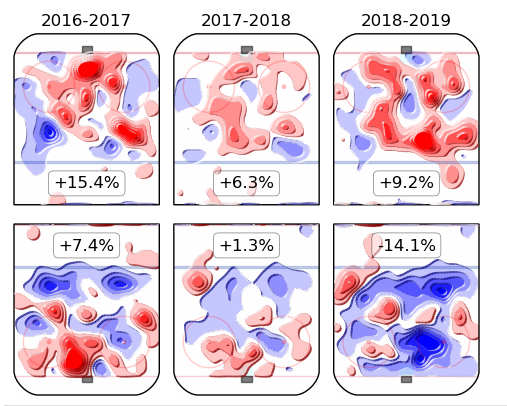 Here are Josh Ho-Sang’s offensive/defensive shot share impacts over his “NHL career” via HockeyViz. Thing is, none of these represent even a quarter-season of work. But beyond that, while it’s fine to throw these out there and say “look”, keep in mind literally everyone has access to this information. Analytics groups the league over know all about these numbers and more.  Dubas and the Leafs? They know about the heat maps. Tulsky and the Canes? For sure. Tyler Dellow (VP analytics) and the Devils? They see the maps too. Arik Parnass (analyst) and the Avalanche? Probably have a good handle on these maps, among other things.

The thing that no one wants to do is just admit they might not know what they’re talking about in between the realms of hockey analysis. As far as I see it these days, most online hockey analysts or reporters or writers are split into one of three groups: Tableau sharers, beat reporters, and scouts. No one tries to dip into all three and try to marry their insights, because…well, that doesn’t seem like it’s going to get you anywhere. NHL teams aren’t hiring generalists.

But I really do think it’s up to people to do better and question even the questioners. We’ve been so stuck in trying not to appeal to authority it’s become a landscape where every perceived odd decision is “because the coach is dumb, and I’m obviously not dumb”. And don’t get me wrong, it’s important to call out weird happenings in the league and wonder why players are cast aside while others seemingly stick around undeservedly. Coaches and managers have their own biases and blindspots, but it’s important to constantly examine your own. There has to be more to it than “Here are shot impacts, I have no idea about anything else regarding this guy. I just know he’s good because of the maps”.

I mean, you don’t need to lick every GM’s boots, but to admit there’s potentially a lot more at play here isn’t going to ruin you either. Maybe if people started to do a bit more digging and interviewing and watching instead of grandstanding we can start to integrate some of this knowledge from further reaches and fill in these gaps to get a better understanding of the game for everyone.