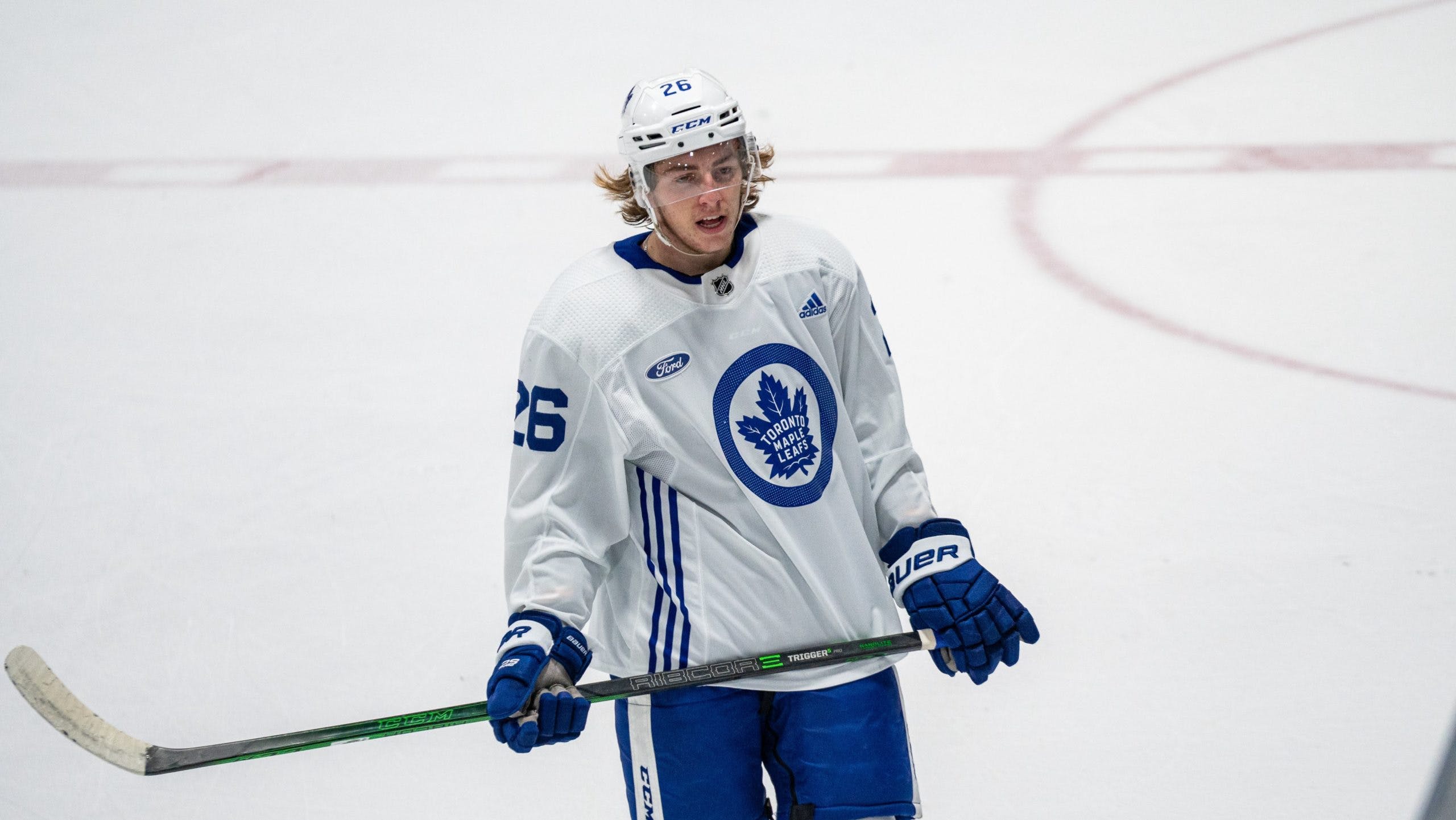 Photo credit: Twitter / @MapleLeafs
By Nick Barden
1 year ago
Comments
Two days until the end of the Traverse City Rookie Tournament indicates 48 more hours to impress Toronto Maple Leafs management.
In recent days, we’ve witnessed players like @Nick Robertson and @Alex Steeves stand out. Those two, though, already have entry-level contracts with the Leafs. But what un-signed players are worthy of an ELC from Toronto?
A few players come to mind, but it’s worth recognizing that the Leafs only have three contract spots remaining. @Josh Ho-Sang and @Nikita Gusev are both signed to professional tryout contracts, and they could take two of those spots if they impress in training camp. If that’s the case, the Leafs would only have room to sign one prospect.
Through two games, Traverse City has shown us who could be closer to receiving a deal. Both Matt Hellickson and Jeremy McKenna have come out of the gate with two goals in two games. Braeden Kressler has been another player who’s made an impact through both appearances.
Advertisement
Ad
Advertisement
Ad
It’s even worth mentioning Noel Hoefenmayer, who spent last season with the Toronto Marlies. He always seems to stand out for me too.
When you’re looking at one contract spot, you have to make sure you get that player correct. The last situation you want is to sign someone who doesn’t work out in the future. It’s always good when a team signs a player to an ELC, and it works out in the end.
Who will be that player, though? Let’s discuss.

The 22-year-old spent parts of last season with the Toronto Marlies and Wichita Thunder. Immediately when he arrived in Toronto, he stood out. McKenna is doing the same right now with development camp and the rookie tournament.
This was his first goal of the game on Friday:

Jeremy McKenna scores his first goal of the rookie tournament.

Jeremy McKenna scores his second goal of the game after a few attempts from Curtis Douglas.#Leafs lead 3-0. pic.twitter.com/vYpQVejIkA

I believe McKenna could be on his way to an ELC because he’s already been with the organization for a year. The Leafs have observed other players, but not to the magnitude that they have with McKenna.
Toronto has seen his work ethic, his skill, and what he can do to be better. If there was a lock for someone to earn an ELC, my first guess is McKenna.

There was a lot of hype heading into Traverse City for Kressler. Through development camp, he caught a lot of eyes and impressed a ton of people.
Being an undrafted 18-year-old, Kressler was coming in with a chip on his shoulder. And he could leave with an entry-level contract with the Toronto Maple Leafs.

His skill while handling the puck is incredible. Kressler can draw players in, like the clip above, and then dish the puck for a scoring chance, which is very good. It’s worked out a lot through his hockey career so far, and he’s done it a fair bit in development camp.
Advertisement
Ad
Advertisement
Ad
Along with excelling with the puck, the 18-year-old is just as good without the puck. Kressler is very skilled at positioning himself in places where scoring chances can come to him.
If he wants an entry-level with the Leafs, I’d say he needs to get on the score sheet in the next two games.

Ever since arriving in Toronto last season, Hoefenmayer has always intrigued me. The 22-year-old plays a game similar to @Travis Dermott. He has shiftiness, some offensive flair and can play very well in his zone.
One thing that I wish he had more control over was his shot. In both Traverse City and Toronto, Hoefenmayer has put a lot of his open shots wide. If he’s able to fix his accuracy, the 22-year-old would be a volatile threat on the ice.
Advertisement
Ad
Advertisement
Ad

Noel Hoefenmayer scores his second of the season.#Marlies trail 4-2. pic.twitter.com/PBhVAAXPtn

Hoefenmayer is a great skater with the offensive flair to eventually make it to the NHL. I do believe, though, that there are some fixes needed before he can get there.
With two more games in Michigan, there could be more players showing they want an entry-level contract from the Leafs. If that becomes a reality, Dubas and his staff will have plenty of tough decisions in the coming days.
They arguably already have difficult decisions with the few players at hand.
It’ll be fascinating to see which players can show their worth through the final two games in Traverse City and whether the ones I’ve listed keep their consistency.
Only time will tell, and before you know it, the Leafs will be starting their regular season. So these players better make it count.
Advertisement
Ad
Advertisement
Ad