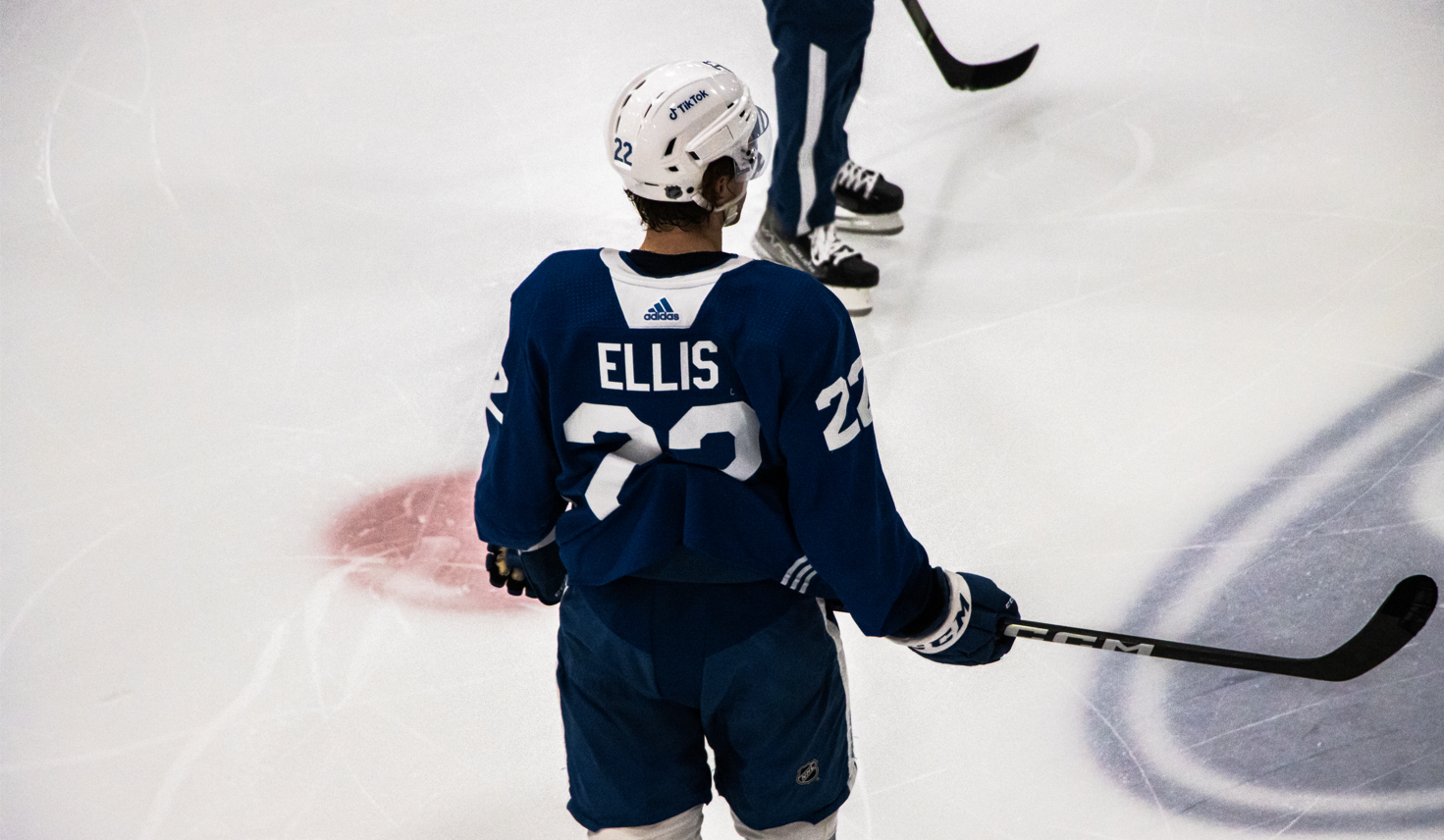 Photo credit: Nick Barden
By Nick Barden
6 months ago
Comments
The second day of Maple Leafs development camp ended just as fast as it began and a few players have started distancing themselves from the pack.
When Max Ellis signed with Toronto back in April, there wasn’t much known about him. A small forward who had plenty of speed and skill was really all the information that we had. The 22-year-old, though, begins his two-year entry-level deal this season and wants to grow as much as possible.
“It meant the world. To be with a storied franchise as great as the Maple Leafs, it was absolutely fantastic,” Ellis said about signing with Toronto. “It’s a dream come true. It’s even better when you get here, when you meet all the people, the fantastic staff they have from equipment manager to coaches, I think everybody is super helpful and nice.”
The 22-year-old was a part of the second group of skaters on Tuesday, which featured the likes of Matthew Knies, Fraser Minten, and Axel Rindell. From watching him in the two AHL games, to now, you can see why the Maple Leafs saw so much from him.
Advertisement
Ad
Advertisement
Ad
Although he’s small, standing at five-foot-nine, his skill and strength on the puck makes up for it. On Tuesday, it seemed like Ellis was at another level, getting in the right spots for scoring chances, and just being faster than most of the players on the ice.
His shot has also really improved and it’s likely another part of his game that’s grown since leaving Notre Dame. But now, with his contract starting this fall, where does he see himself once Maple Leafs training camp comes to an end?
“I don’t really have any expectations.” Ellis said. “Just head down, work hard, and wherever that puts me is wherever that puts me.”
Another player who’s shown glimpses of having potential is Maple Leafs 2022 third-round pick, Nick Moldenhauer. The 18-year-old skated with the first group once again today and wasn’t afraid to be a standout in a loaded batch of players at development camp.
Advertisement
Ad
Advertisement
Ad

Moldenhauer spent last year with Chicago Steel in the USHL, scoring 43 points (18 goals, 25 assists) in 41 games. What stands out to me about the 18-year-old is his puck protection while under pressure and his ability to find open ice in small spaces.
Along with that, his capability to find players for a pass is something that caught my eye. He’s a very smart player and one who could provide value to the Maple Leafs in the next couple of years.
And being from Toronto just makes this experience a lot sweeter for him.
“I’m eating my lunch the other day and I see John Tavares walk over and introduce himself to me.” Moldenhauer said with a grin. “So, that’s pretty insane, it was definitely pretty cool.”
After the 18-year-old was drafted, he walked over to the Maple Leafs’ table and shook everyone’s hand. But he gave a big hug to now Assistant General Manager in Toronto, Ryan Hardy, who was with the Chicago Steel before joining the Leafs.
Advertisement
Ad
Advertisement
Ad
“He (Hardy) has a really great relationship with my family, especially my brother. If you ask him why I came to the Steel, he’d probably say he was recruiting my brother instead of me.” The 18-year-old joked. “So, we have a really good relationship. It was pretty cool to share that moment with him as well.”
Moldenhauer, though, isn’t the only player at Maple Leafs development camp who’s from the Toronto area. There are a number of players from around the GTA and beyond, but another who’s been an interesting story is Ryan Tverberg.
The 20-year-old was the unfortunate final cut on Team Canada’s World Junior roster back in December of 2021. Even though the Leafs prospect was so close, he didn’t allow that experience to let him down.
“Being the Ralph Cox of Canada didn’t feel good,” said a smiling Tverberg. “But of course there were lots of things to take away being around great players there. And you know, after that, just driving to do more. Like, why not me the next time? Just working harder, just using it as fuel.”
Advertisement
Ad
Advertisement
Ad

Ryan Tverberg with some nice moves as the first group wraps up their session at #Leafs development camp today. pic.twitter.com/FZCFQR9H5y

Tverberg is entering his third year at the University of Connecticut. And when he leaves Leafs development camp, his hope is to be more of a two-way player — something Toronto will need in the future.
“I just want to adapt and play against different styles of hockey players and use the ways that they’re (Leafs development staff) teaching us,” Tverberg said. “Like, time and space, more down low work, and using that more in my game so that I can excel when I go back and play against my teammates, and helping them to play that same style.”
The three of Moldenhauer, Tverberg, and Ellis were among the standouts on day two. But one of the more interesting players that I’ve seen is Mathieu De St. Phalle, who’s spent the last two seasons with the University of Wisconsin. And before that? The Chicago Steel.
Advertisement
Ad
Advertisement
Ad
He’s impressed me a lot in the instances that I’ve seen from the first two days. The 22-year-old went undrafted and could be an interesting signing for Toronto.
One test will be on Tuesday when the players will play in their first of two scrimmages at camp. After the game, we may know who might be a front-runner for a contract once this week ends.
Another player who’s looking to standout is Matthew Knies, who finished day two being the last prospect on the ice. Doing drills with four of the Maple Leafs’ development staff.

If that doesn’t show that Toronto is high on the 19-year-old, than I don’t know what will.
Wednesday’s Leafs development camp scrimmage will begin at 4PM ET and won’t end until 6:30PM ET. It’ll be a big day for all of the players to show what they’ve learned and what they have to give in the future.
Advertisement
Ad
Advertisement
Ad
More from TheLeafsNation.com