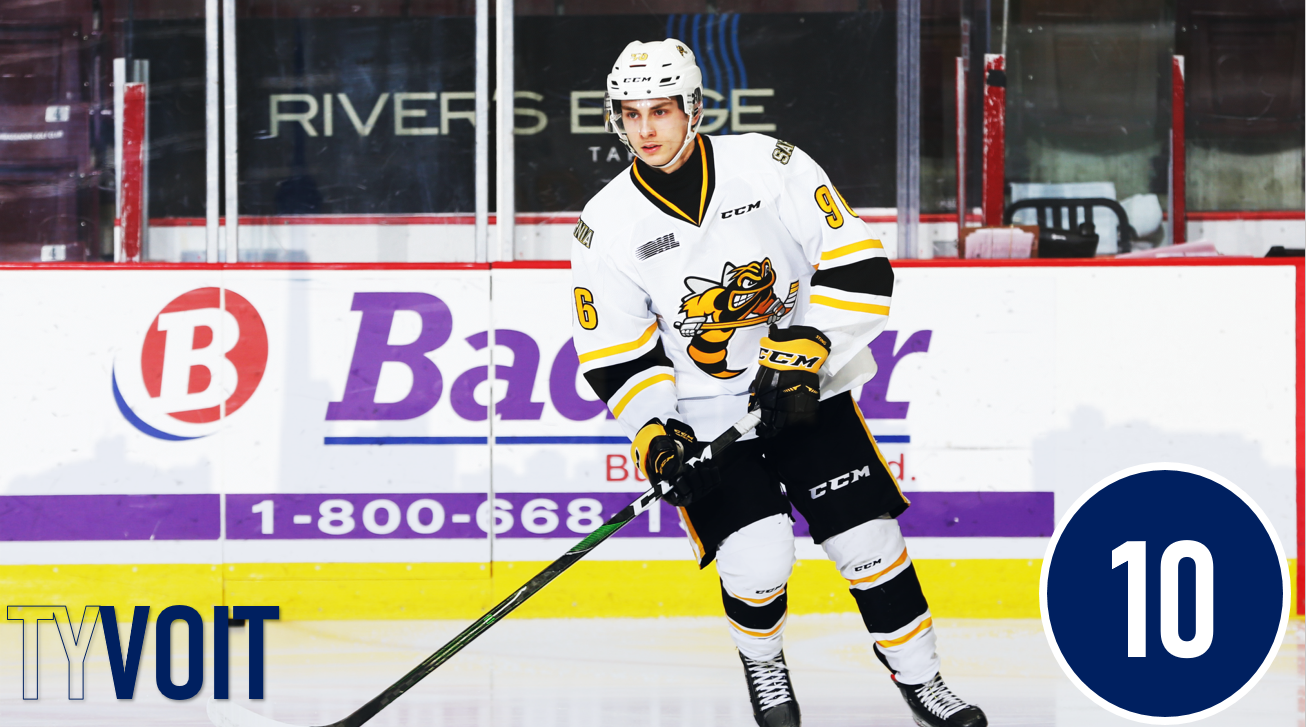 By Kyle Cushman
3 months ago
It’s easy to forget that we’re just one season removed from the cancellation of the 2020-21 OHL campaign. The long-term impact of the development for the prospects affected has yet to be seen, but we are already beginning to see steals emerge from the 2021 draft in the short term.
In the fifth round in 2021, the Toronto Maple Leafs took a swing on a small, creative winger who had shown promise in his underage season as a potential high-end playmaker in @Ty Voit. Ranked as high as the second round by some outlets, Voit fell to the fifth round due largely to his non-existent draft-eligible season.
In selecting Voit, the Maple Leafs were hoping to have found a gem out of unusual circumstances. Returning to action in 2021-22, Voit began to make good on that upside, emerging as one of the elite playmakers in the OHL and proving he should’ve been drafted much earlier than 153rd overall.
Ty Voit’s statement season with Sarnia sees him rise eight spots on the TLN Prospect Rankings to crack the top 10.

C | Sarnia (OHL) | Age: 19 | 5-foot-10 | 161 lbs | Shoots: R
Acquired: 2021 Draft, 153rd Overall | 2021 Ranking: #18
As was the case for most OHLers coming off of an entire year without game action, many didn’t know what to expect for Ty Voit heading into the 2021-22 season.
Back in 2019-20, Voit had shown promise as a playmaker in a depth role with Sarnia, scoring 20 assists and 28 points in 49 games in his underage season. But with over a year between games and a Sting roster without a lot of high-end talent to surround Voit with, it was easy to see a scenario where Voit could’ve struggled early in the season.
Reality couldn’t have been further from this concern. Voit came out of the gates hot, opening the campaign on a nine-game point streak. Immediately, Voit was looking the part of a high-end scorer at the junior level, carrying the Sting offensively. He did this while also moving to centre for the first time in his career, having taken a whopping two faceoffs in his rookie season.
This early season success was rewarded by the Maple Leafs, as they signed Voit to an entry-level contract in December.
At first glance, it may be easy to underrate Voit’s season. His 80 points in 67 games ranked 19th in the OHL. By points-per-game, Voit ranked 10th among 2021 draft-eligible players, the same place he ranked in his underage season. If Voit still ranks in the same spot relative to his draft class, why is he rising so drastically on the prospect rankings?
Context is key, especially at the junior level. The Sarnia Sting were a below-average team this past season, even with Voit’s efforts. Sarnia finished eighth out of 10 teams in their conference, making the playoffs by one point for the final position. A young team, Voit was leaned on as a leader, with only one overage player finishing the season on Sarnia’s roster.
Voit was also leaned on offensively, leading the team in scoring by 21 points. He scored a point on 33.5 percent of Sarnia’s goals at even strength, ranking 12th in the OHL in this metric. The only 2021 draft-eligible players to rank ahead of Voit in this regard were @Mason McTavish, @Wyatt Johnston, and @Jack Beck.

In addition to ranking as one of the most valuable players to his team in the OHL, Voit also finished third in the OHL in primary even strength assists with 31, only beaten by the aforementioned Wyatt Johnston and @Rory Kerins. Remarkably, only 10 of Voit’s 80 points were secondary assists, only reiterating just how involved Voit was in Sarnia’s offence all season.
After his torrid start to the year, Voit did cool off just a touch in the second half. He scored 45 points in 33 games in the first half of the season and 35 in 34 games in the back half of the year.
As has been stated repeatedly, Voit’s best attribute is his playmaking. He is a deft passer, connecting on plays all around the rink. Whether it’s a tape to tape long pass up the ice…
Or an east-west switch that threads the needle…
Or a quick saucer through a defender…
Or a fake shot pass on a 2-on-1…
…Voit has a bag full of tricks as a playmaker that makes his offensive potential truly exciting.
Speed is often stated as a requirement for small players to make it to the next level; this is an area where Voit doesn’t need to worry. He’s got breakaway speed in a straight line and is an elusive skater around the ice. Watch him pull away from the defenders here to give himself plenty of room to dangle on the breakaway.
Voit packages his playmaking ability with superb skill in carrying the puck. He was one of the top forwards in transition in the OHL this season, not only through his passing ability but also his skating and elusiveness. Voit was able to gain the zone time and time again with the craftiness he possesses with the puck on his stick.
Combining his puck-carrying skills and deft playmaking, Voit is able to draw defenders towards him when handling the puck, opening up space for his teammates. Check out this play where Voit lures the attention of all four penalty killers before slipping a pass to his teammate for the one-timer goal.
Unlike some passing-oriented forwards, Voit doesn’t overhandle the puck often. Instead, he is quick to give and go with teammates, looking to connect on quick first-touch passes to keep play moving when the situation calls for it.
Voit is improving as a shot threat as well. He is still certainly a pass-first player, but Voit began to get into more dangerous shooting situations over the course of the season.
With his cerebral offensive instincts, Voit can find open ice in the zone by darting into space and eluding defenders with movement. Here, Voit starts the transition by firing a pass to his teammate on the near side boards. He then drifts wide and attacks the net with speed, getting behind the defence for a tap-in goal.
Just as Sarnia’s even strength offence often flowed through Voit, so did their powerplay. Voit was a fluid presence on the top unit, starting on the left flank and rotating to multiple different areas on the ice depending on where the play developed. His most common move was to rotate from the left flank to the point while carrying the puck, looking for a lane to either pass or shoot through.
As one would anticipate for a player listed at 5-foot-10 and 161 pounds, Voit has a long way to come physically. Though Voit is good at picking up a loose puck and turning it into an attack quickly, he is not a good forechecker and was not particularly involved defensively. Voit did play as a secondary penalty killer for Sarnia, but I don’t really see this as a part of his game long-term.
I also don’t see Voit as a centre long-term. He was abysmal on the faceoff dot, winning about 45 percent of his draws, and shifted back to the wing for a few playoff games.
In terms of NHL upside, Voit still profiles as a bit of a boom or bust prospect. If he can add more strength and his offensive game translates to the next level, Voit projects as a top nine scorer with powerplay capabilities. If he doesn’t hit offensively, it’s hard to see an NHL path given his lack of size.
Voit will return to the OHL for the 2022-23 season with Sarnia, where additions and internal progression from young players will hopefully give Voit more support. The Sting are adding Florida draft pick Sandis Vilmanis through the import draft, a goal-scoring Latvian who could match up nicely on Voit’s left flank. Sarnia will also be hoping for big contributions out of Max Namestnikov, their third overall pick in 2020, Angus MacDonell, their 2021 first-round pick, and their recent fifth overall pick, Porter Martone.
If Sarnia doesn’t take a step towards contention, look for Voit to be one of the top names potentially available at the OHL trade deadline, as he plays out his final year of junior hockey before turning pro in 2023.
Additionally, watch out for Voit as a contender for the 2023 World Juniors with Team USA. He was recently at USA’s World Junior summer evaluation camp, a big start to the 2022-23 OHL season would put him in a good position to earn a shot at the World Juniors.
Ty Voit’s impressive 2021-22 season in the OHL sees him crack the top 10 on this year’s edition of the TLN Prospect Rankings. As one of Toronto’s many mid to late-round swings on upside, the Maple Leafs will be hoping Voit continues to build on his strong showing last season to become one of the truly elite scorers in the OHL in 2022-23.
Statistics via Elite Prospects, Pick 224
More from TheLeafsNation.com