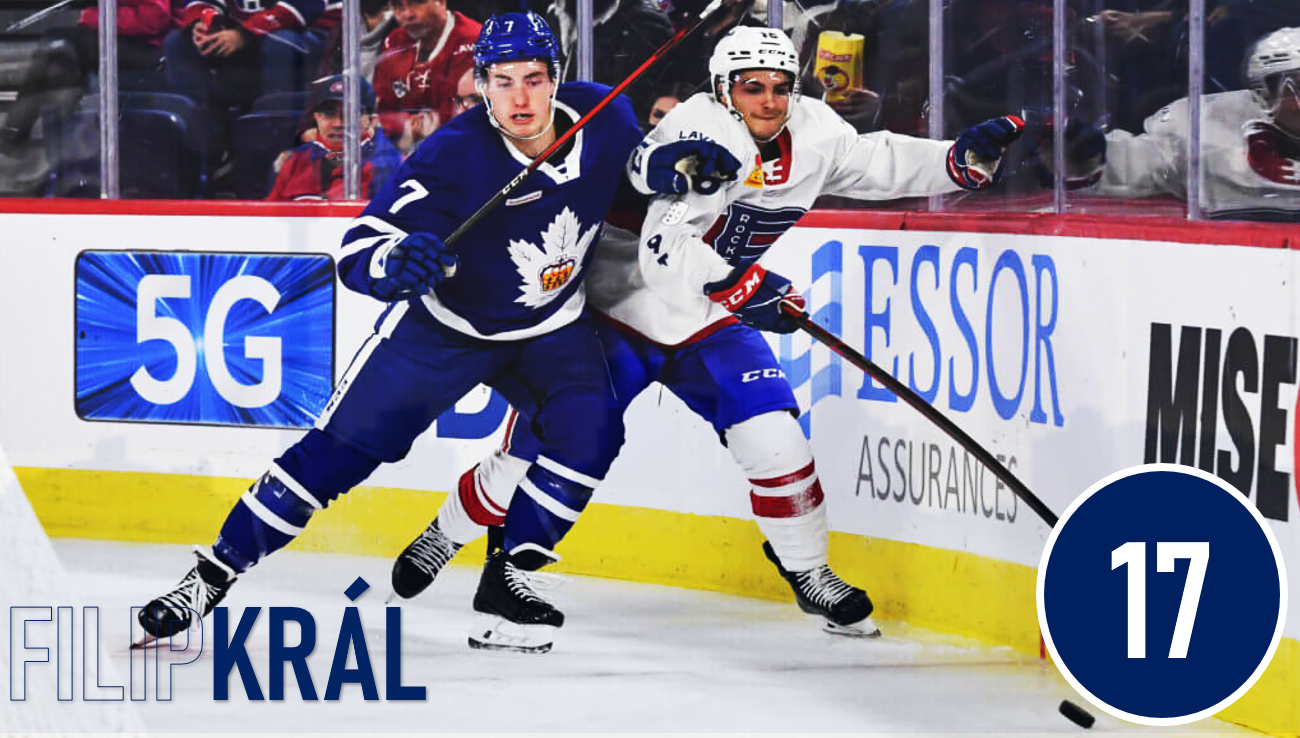 By Nick Richard
4 months ago
Král got his first taste of AHL action in 2020-21 after spending the majority of the season playing for Kometa Brno in the top Czech professional league, notching a respectable 21 points in 48 games before his 10 game audition with the Marlies. This past season was his first full campaign in the AHL and the only defenceman on the Marlies’ roster to suit up in more games for the club was Joey Duszak.
Taking on a regular role for the Marlies, Král finished inside the top-15 in scoring among AHL rookie defenders with three goals and 18 assists while averaging almost 19 minutes of ice time over 58 games.
It was an up and down season for Král, but he gained valuable pro experience and showed signs of progress over the course of the year, climbing into the top 20 of TLN’s prospect rankings after being unranked last summer.

LHD | Toronto (AHL) | Age: 22 | 6-foot-2 | 194 lbs | Shoots: L
Acquired: 2018 5th Round, 149th Overall | 2021 Ranking: Unranked
While Král’s individual raw production was modest, the Marlies scored a lot when he was on the ice. Unfortunately, they also gave up plenty of goals against when he was on the ice. Of course, that wasn’t entirely of his own doing and among defencemen the Marlies used regularly, his even strength goals for percentage of 47.3% landed him in the middle of the pack.
There was a lot happening at both ends of the ice when Král was out there in his rookie season, and quieting things down on the defensive side while still being able to help drive offense from the back end will be an area of focus for him in his second AHL campaign.

Král saw ample powerplay time with the second most usage on the man advantage among regular Marlies blueliners – behind Duszak – but less than a third of his production came on the powerplay, whereas almost half of Duszak’s 52 points came when the Marlies were up a man. In a sense, it is encouraging that Král wasn’t overly reliant on powerplay production, but there is also room for him to become a more potent weapon in man advantage situations.
He wasn’t used with nearly the same kind of frequency in shorthanded situations, seeing fewer minutes on the penalty kill than all but Duszak and Brennan Menell among Marlies’ regulars on the blue line. That special teams usage illustrates the kind of player the Leafs view Král as, at least currently. He can distribute from the point and quarterback a powerplay but his defensive game hasn’t developed to the point where he is trusted to handle those difficult minutes.
Král isn’t exactly a powerplay specialist, but he reads the play well from the point and shows good instincts in terms of when to activate down the wall, and he has decent vision when provided with time and space. Check out this play where he recognizes the loose puck in the circle and pounces on it while still having the wherewithal to find Mikhail Abramov with a slick drop pass:
He also has a good sense of pressure and spacing in the offensive zone, particularly with the man advantage. On this play, he draws the defending forward down low before finding Mac Hollowell at the point, but instead of retreating back to the point himself, he occupies the space vacated by the defender chasing the play and makes himself available on the weak side for a pretty powerplay goal:
At even strength, Král is more of a facilitator than a driver from the back end. He makes a good first pass more often than not, but he doesn’t show a ton of creativity as a puck mover, and he can be forced into poor decisions under pressure. Král’s skating isn’t a strength, and he lacks the agility and separation speed to elude opposing forecheckers. Because of this, he usually hits his first read rather than beating the first layer of resistance on his own to open up more space in transition.
There are still warts in Král’s defensive game, but there are some skills to build off of on that side of the puck as well. He defends with an active stick in his own zone, pressuring opposing puck carriers and disrupting passing lanes. Král isn’t an overly physical player, but he uses his body well to pin opposing players along the wall to disrupt the cycle. He will, however, have to improve his processing speed and do a better job of boxing out or tying up the opposition in front of his own net.
Where Král can really be exposed is off the rush, where oncoming attackers can take advantage of his unrefined footwork to play pucks through or around him and beat him wide. He typically maintains a solid gap, but when faced with speed, he is often unable to turn and skate with the attacking forward. When he remains patient and composed, his active stick and good gap control can prevent opposing chances or force low-danger shot attempts:
While it wasn’t always pretty, Král had a solid first season in the AHL with some extended stretches of strong play, including a run of 13 points in 13 games that helped him earn an AHL Player of the Week nod. The key for him in his second season with the Marlies will be finding more consistency in his play with the puck which, in turn, should help to limit opposing chances. On top of working on his skating, improving his ability to retrieve pucks and quickly move them up ice will be crucial if he is to take the next step.
With Duszak no longer in the mix, Král could take on an even more prominent role on the powerplay next season, but he will also have to fend off Hollowell and newcomers such as Axel Rindell, William Villeneuve, and perhaps to a lesser extent, Mikko Kokkonen for the role. With all the fresh faces on the Marlies’ blue line this coming season, there will be plenty of competition for playing time, but Král’s solid showing as a rookie should give him a leg up to start.
Král is still a project with areas of his game that require improvement, but his hockey sense and offensive instincts are reasons to believe that he could eventually grow into a viable option at the NHL level. Improved mobility will unlock new ways for him to attack offensively and allow him to defend more effectively. If he can do that and build upon his rookie season, he will put himself in a good position to climb this list next summer and inch his way closer to a look with the big club.
(Statistics from EliteProspects.com)
More from TheLeafsNation.com