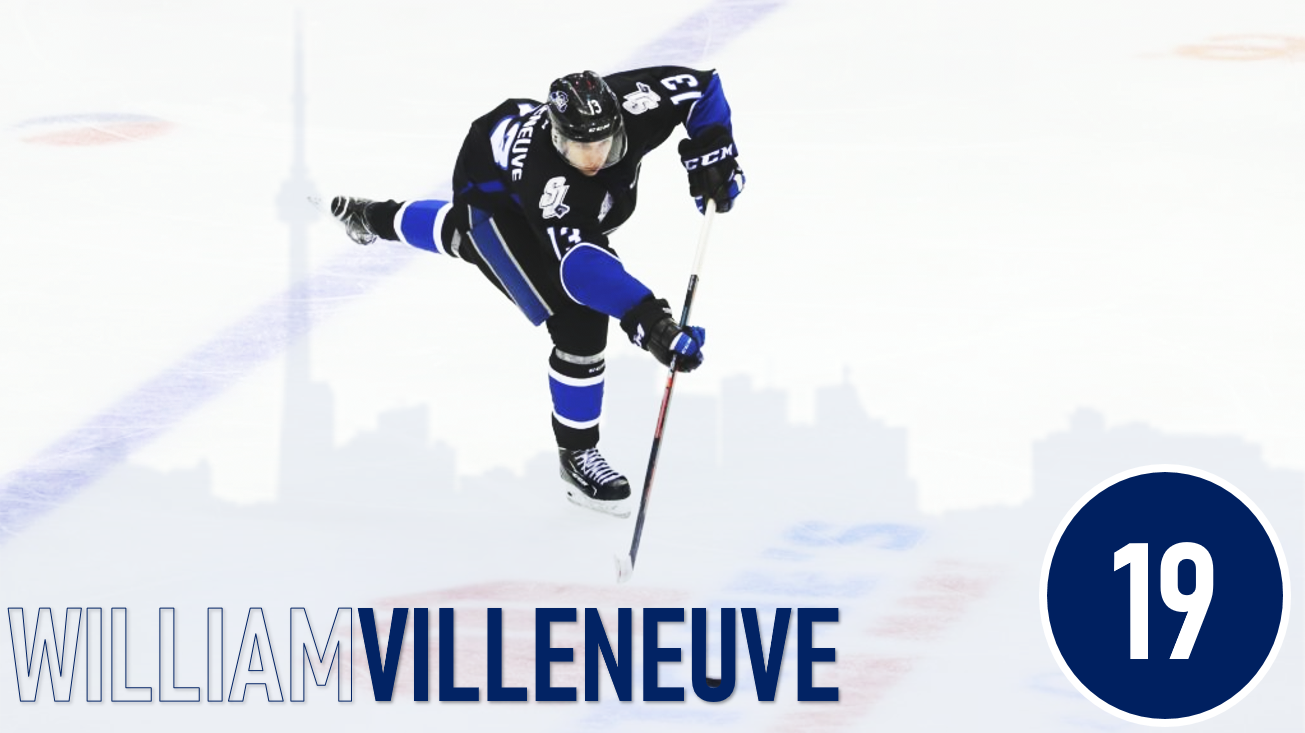 By Nick Barden
6 months ago
The pandemic NHL Draft was one of the most interesting — the Maple Leafs and every other team in their own war room drafting players in October rather than June.
Toronto had 12 picks back in 2020, the most they’ve had in a draft since 1996. A number of good players were picked but the one we’re going to focus on today is William Villeneuve.
This is the first time he’s cracked the top-20 of The Leafs Nation’s Prospect Rankings and the 20-year-old is ready for his first year of pro. Villeneuve just finished his final season of junior, winning the Memorial Cup with the Saint John Sea Dogs at home.

RD | Saint John Sea Dogs | Age: 20 | 6-foot-2 | 181 lbs | Shoots: R
Acquired: 2020 Draft, 122nd overall | 2021 Ranking: Unranked
There’s a lot to look at with Villeneuve as a prospect. He’s got the size, at six-foot-two, but his weight still isn’t where it might need to be for pro. Yet that may be one of the only downsides to the 20-year-old’s last season in junior, and future as a pro.
One of the ways he’s able to shine is being a smart two-way defenceman. Villeneuve, in 64 games with the Sea Dogs this season, had eight goals and 46 assists for 56 points — all of that while still being a reliable player in the defensive zone as well.
His knowledge of where to be on the ice at all times is a massive plus. He’s able to join the rush when needed as well, which at times provides a huge boost to his team. A huge asset Villeneuve now has is the experience of winning a trophy like the Memorial Cup.
Moments like those will be key when he makes the jump to pro, assuming he begins the season with the Toronto Marlies.
At the moment, where he might end up is still in the air. The Maple Leafs have a number of defencemen that will likely join the Marlies after training camp and once that becomes a reality, the blue line is going to be crowded.
By the way Maple Leafs Assistant GM and Head of Player Development, Dr. Hayley Wickenheiser makes it sound, he could be destined for the AHL.
“I think the next transition for him, when he comes up with the Marlies next season will be defending and really being able to solidify that part of his game.” Wickenheiser said during the final day of Maple Leafs development camp. “We know that he’s got offensive upside, he can move the puck. Sometimes the simple play is the best play and I think when you’re at the pro level, you have to understand those moments — when to complicate it, when to keep it simple.”

If there’s not enough room for Villeneuve on the Marlies at the beginning of the year, I’d expect the 20-year-old to go down to the Newfoundland Growlers and spend some time there. With them, Maple Leafs staff will be able to see how he fares against pro players, and he might even gain a lot of confidence in the ECHL.
After Villeneuve spends a bit of time there, I believe it would be wise to see what he has at the AHL level. But again — he could begin the season there — it’s just all about numbers after Maple Leafs training camp.
Along with his size, the 20-year-old is an incredibly smooth skater and has gotten much better throughout the past year. Being the two-way defenceman he is, Villeneuve (#13) can join the rush when needed and use his acceleration to get up the ice quickly for a chance.
His skating allows him to that while also getting back after the possible scoring chance.
Similar to what Wickenheiser said, there are times where Villeneuve chooses a more difficult play rather than the easier one. Watching his game, the 20-year-old sometimes struggles with the decision of whether or not to pinch in the offensive zone.
Most of the time, his skating makes up for it, getting back to make the defensive stop. But there are moments where he does get caught and is too deep to backcheck in time. But I wouldn’t say it happens all that often, though.
The 20-year-old’s gap control, as well, is a part of his game that makes him such an effective defenceman. In the clip below, you can see a number of instances where Villeneuve (#13) cuts off a pass while being the only defender.
Villeneuve’s vision is another part of his game that allows him to flourish as a two-way defender. The 20-year-old finished fourth in assists among QMJHL defencemen this past season. His ability to find his teammates on the ice to either transport the puck up the rink or to set them up for a scoring chance is a huge asset.
His vision also comes in handy while in the defensive zone as well. It allows him to defend better and find players from the opposing team to cover to avoid them getting scoring chances.
He has a lot of attributes that allow him to be a great defenceman and is someone I could see in the NHL one day. Everything about Villeneuve — his size, physicality, speed, puck-moving abilities — all make for a two-way defender who could have a lot of upside.
The next big step for the 20-year-old, though, is going to be whether or not he can handle the physical demands of the AHL, if he’s indeed there next season. Either way, Villeneuve is going pro next season and I’m intrigued to see how much weight he gains before then, and eventually, how he handles the next level.
More from TheLeafsNation.com