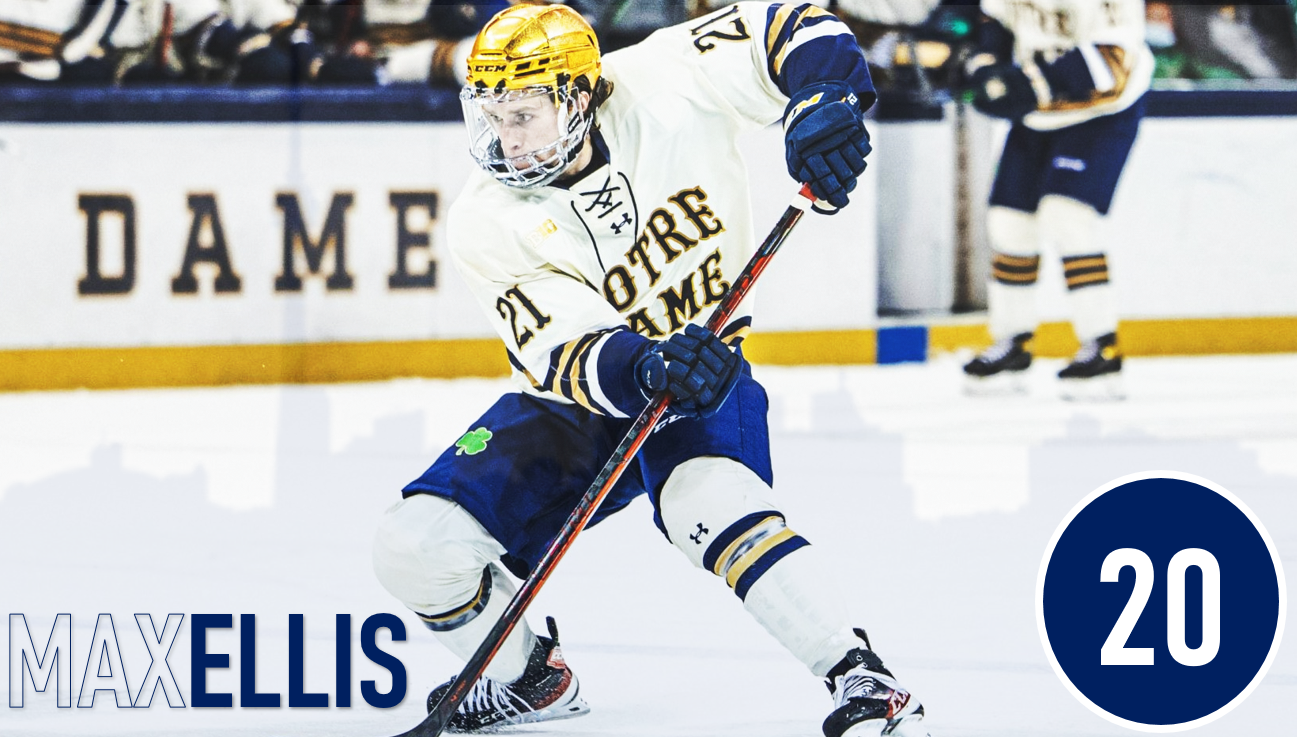 By Kyle Cushman
3 months ago
When you lack draft capital as the Toronto Maple Leafs have over the past two seasons, making just eight selections over that span, one way to supplement the prospect pool is to dip into the undrafted free agent market.
Enter @Max Ellis, the lone undrafted NCAA signing for Toronto this spring.
Ellis makes his debut on the TLN Prospect Rankings just inside the Top 20 after his impressive breakout season at Notre Dame. While his team-leading 16 goals and 28 points would suggest a straightforward, productive season for the 22-year-old winger, there is a lot more to Ellis’ season that makes him a fascinating new entry to the prospect pool.

RW | Notre Dame (Big-10) | Age: 22 | 5-foot-9 | 165 lbs | Shoots: R
Acquired: UDFA Signing, 4/8/22 | 2021 Ranking: N/A
Entering the 2021-22 season, Max Ellis had an opportunity to earn a spot on Notre Dame’s top line. The Fighting Irish were in need of a new top contributor following the departure of @Alex Steeves, funnily enough to the Maple Leafs organization. Ellis had a good year in 2020-21, scoring 16 points in 24 games in his first full year of NCAA action after being limited to just eight games as a freshman, but was mainly used in a secondary role.
With Steeves moving on and no notable freshmen recruits entering the fold, Ellis would be one of the first players to get a chance higher in the lineup. Out of the gate, he made good on that opportunity.
Ellis was hot in the first half of the NCAA season, scoring 13 goals and 23 points in Notre Dame’s first 20 games to land squarely on NHL radars. He was performing well, getting puck luck, and setting himself up as one of the premier NCAA free agents come the end of the season.
Then came the second half, where all of that luck seemed to evaporate. Down the stretch, Ellis scored just three goals and five points in the final 19 games of his season. His electric first-half totals were still enough to lead the team in goals and points, but Ellis’ final stat line of 16 goals and 28 points in 39 games is far from the flashy point-per-game rate with which he scored in the first half.
Ellis was reportedly dealing with an ankle injury in the back half of the year, which impacted his results, but even with that factored in, the season splits are stark in contrast.
On the ice, Ellis’ quickness is his primary attribute. He plays an up-tempo style, looking to anticipate play and get a jump on opposing defenders by sprinting up the ice. His top-end gear doesn’t blow you away, but his acceleration often gives him the first step over defenders. His quickness should still be an advantage at the next level.
Ellis isn’t afraid to attack defenders one-on-one, either looking to deke around them or shoot through them. This is an area where he can stand to diversify his game, using his speed to get into more dangerous areas rather than relying on his hands to get around the opposition or settling for shots from distance.
In this clip, Ellis (#21) gets into space and provides his teammate with an outlet to exit the zone. As his teammates begin to change on the far side, Ellis attempts to deke around the defender at the end of his shift rather than get the puck deep and complete the change. As a result, Notre Dame is out of position as Minnesota counters and a good shot puts the Golden Gophers up 2-0, an avoidable play with more situational awareness from Ellis.
Speaking of hands, Ellis’ hand-eye coordination stood out. Multiple times, Ellis was able to control a bouncing puck in the neutral zone and turn it into a quick rush chance, or corral a loose puck in tight and create a chance out of it. He has solid hands but probably chooses to deke through defenders more than he should be given his ability, as shown above.
Despite his small frame, listed at 5-foot-9 and 165 pounds, Ellis isn’t afraid to engage physically. On the forecheck, Ellis uses his speed to either beat defenders to the puck or pressure them into quick decisions. This resulted in numerous chances created over the course of the season and will be an important attribute to continue to build upon if Ellis is to become a complementary winger at the NHL level in the future.
Even though quickness is a big part of Ellis’ game, he was actually more effective through in-zone cycle offence rather than through rush chances. When part of the cycle, Ellis was able to find seams through the defence and slip passes to dangerous areas. This, combined with Ellis’ shot threat both from the net-front and in the slot, make him a player that is a dual threat when creating offence in the zone.
In this next clip, Ellis (#21) is engaged in a puck battle along the boards. When the Wisconsin defender pulls the puck out and gets play moving again, Ellis quickly jumps on the second defenceman and forces a turnover. After the Notre Dame chance, Ellis supports his teammate behind the net, begins to cycle towards the near boards, and slips a dangerous pass to the slot after getting the defender to bite on the low-high option.
The key to unlocking Ellis’ offensive potential will be to work on his shot selection off the rush. As a player with speed who can carry the puck, Ellis has the tools to be a player that creates off of the rush, it just didn’t happen that often this season. A big reason for this is down to his shot selection, as Ellis would consistently shoot at the first opportunity, often from non-dangerous areas.
Take this sequence, for example. Ellis (#21) controls a bouncing puck in the neutral zone. He builds up speed as he begins to attack the defender, but instead of looking to drive to the net, he settles for a shot from far out that isn’t especially dangerous. Sure, this creates an offensive zone draw, but Ellis doesn’t look to make anything more from the rush chance he has created. He could drive to the net with his speed, look to find his teammate on the right wing, or even delay and wait for more teammates to arrive. Instead, it’s a fairly straightforward stop for @Jack LaFontaine.
This shoot-first mentality, particularly on rush opportunities, is reflected in his individual shot generation this season. Ellis ranked ninth in the entire NCAA with 3.85 shots per game. His 150 total shots on goal ranked sixth.

Instead of opting for the first shot that he can get through, Ellis could create much more dangerous opportunities for himself off of the rush by using his speed and driving to the net. This isn’t even a foreign concept to Ellis’ game, as he is more than willing to go to the net as an off-puck attacker.
Combining Ellis’ off-puck instincts to go to the net with his ability to create rush opportunities could turn his relatively average offensive potential into a legitimate strength.
In the following clip, Ellis (#21) combines a few of these skills. First, he sprints into the zone and attacks the net. When the pass doesn’t come, Ellis immediately shifts from a net-front attacker to a forechecker, forcing the Wisconsin defenceman into a turnover and winning the puck battle. Finally, as Ellis begins to cycle, he finds his teammate in the middle of the ice in a dangerous position, though the pass is just behind the desired target.
On special teams, Ellis was largely a secondary powerplay contributor with Notre Dame and I don’t see a ton of powerplay upside in his game. Where his special teams value comes into play is as a penalty killer.
Ellis is a solid defensive player, actively using shoulder checks to keep tabs on his positioning and anticipating play well. This, combined with his aforementioned quickness, is what makes Ellis a strong penalty killer. He can beat players to loose pucks and effectively pressure opponents into mistakes, making life difficult for the opposing powerplay quarterback.
In fact, Notre Dame had the top penalty kill in the entire NCAA last season at 90.6 per cent, allowing just 13 powerplay goals all season. Ellis was one of the primary penalty killers on this unit, chipping in two shorthanded goals in the process as well.
As an undrafted signing out of Notre Dame with three seasons of NCAA hockey under his belt, it’s hard not to compare Ellis to last season’s success story in Alex Steeves. Just like Ellis, Steeves left Notre Dame to sign with the Maple Leafs prior to his senior season having led the team in goals and points as a junior.
Steeves exceeded expectations, producing at a point-per-game rate in the first half of the AHL season, even making his NHL debut in December. He finished the year with 23 goals and 46 points in 58 games and is set to compete for a spot on the Leafs roster in the fall after only one year of AHL experience.
Not to be the fun police, but those are unrealistic expectations for Ellis. At nearly every step, Steeves has been more productive than Ellis. He was better in the USHL as a draft-eligible and has two years of strong NCAA production, compared to Ellis’ half-season. Additionally, Steeves is only one month older than Ellis, so their year-by-year progression has been at the same time.

2022-23 will be Ellis’ first professional season, having only played in two games late in the Marlies year on a PTO. The Marlies have a fairly crowded forward group with the Maple Leafs unable to carry any extra forwards as currently constructed. Regardless, Ellis projects as a bottom-six forward for the Marlies out of the gate that will bring energy and will play on the penalty kill.
Depending on what further moves are made and how he plays early in the season, Ellis could quickly climb up the lineup. Given the amount of depth forwards Toronto has, it’s very unlikely Ellis pushes for NHL minutes this season.
In terms of his NHL potential, Ellis currently projects as an energy fourth liner who can chip in as a penalty-killer. With the refinement of his offensive skill set, there could be a complementary third-line player to be unearthed, but this is more of a “best case scenario”.
Max Ellis enters the 2022-23 season without much fanfare, but that’s usually the case for undrafted free agents. Coming off of a season with such stark splits, it will be quite interesting to see how Ellis performs at the start of the season and if he is able to put together a consistent full season as he begins his career as a professional.
More from TheLeafsNation.com