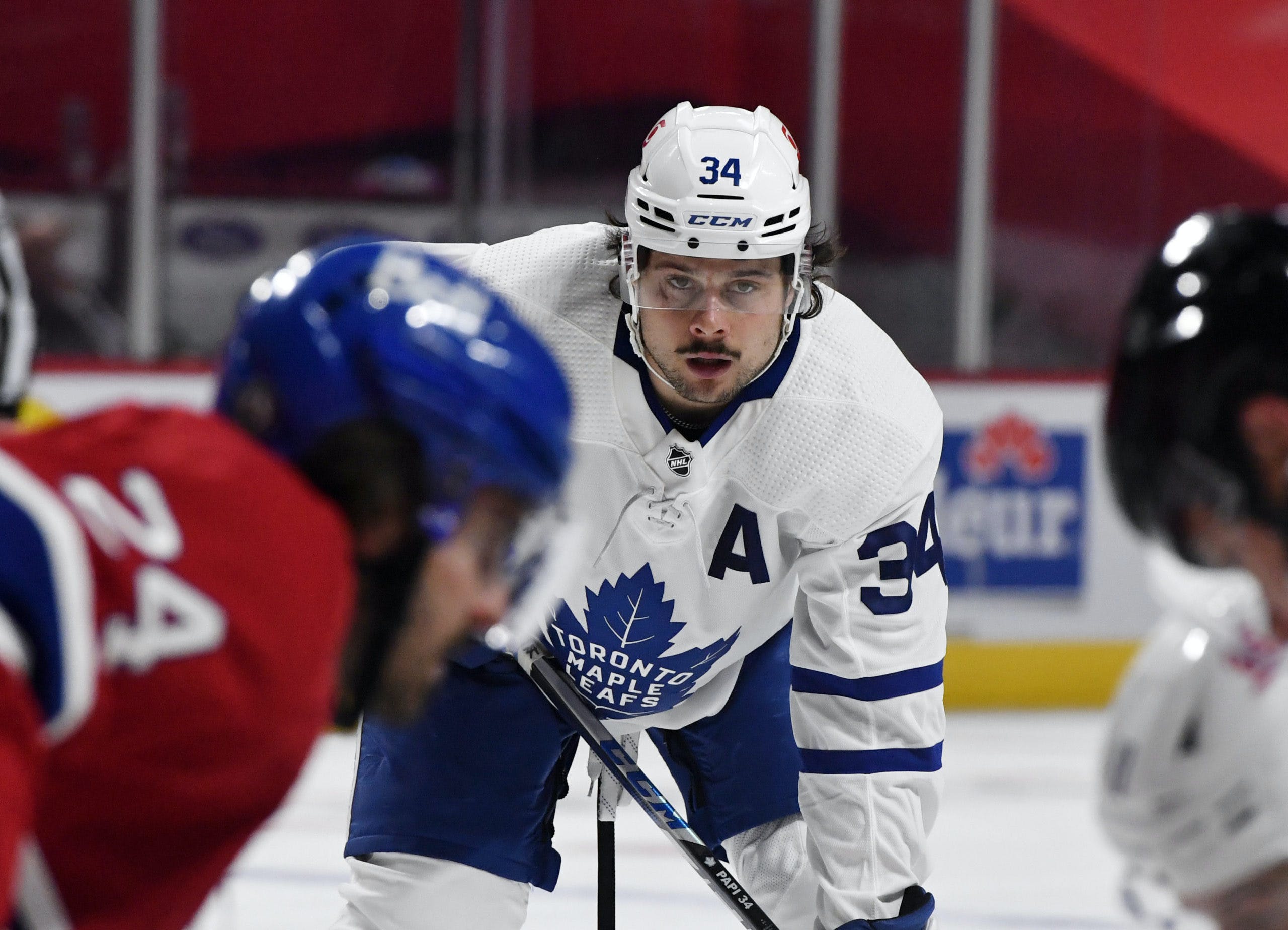 By Joseph Zita
1 year ago
The Toronto Maple Leafs had a huge opportunity to close out the series against Montreal in game 5 on Thursday night on home ice. However, as we all know by now, they just fell short and lost 4-3 in overtime after being down 3-0 in the second period and slowly crawled their way back to tie the game and gave a lot of fans hope. Although it was heartbreaking to see them lose a close game in overtime that would’ve seen Toronto win their first playoff series since 2004, they are right back at it tonight in Montreal for game 6 and fans are definitely feeling a bunch of emotions right now, that’s for sure.
With game 6 being tonight, there are some certain players on the Maple Leafs that I think need to step up in this game to help secure a victory for Toronto. I’m not saying these three individuals have been downright garbage this series, but there are two players who haven’t really been playing up to their standards and are just waiting for a breakout game to happen for them. If there was a certain game for these two guys to step up and lead the team to victory, it’s this game and I think they know it as well.
With that being said, here are three players who need to step up and help produce in game 6 against the Montreal Canadiens tonight if they want to close this series out and not allow the Canadiens to force a Game 7 on Monday night.

2021 playoff stats – 5 GP – 1 G – 0 A – 1 PTS – 11:01 TOI
Now I know we really shouldn’t expect a lot from a 41-year-old that has only averaged around 11 minutes of ice time this series, but it’s more so of his decision-making that has cost Toronto a couple of goals. He was pretty brutal in the first game of this series turning the puck over to a Canadien twice and it directly led to a goal both times, and I know that was game one and now the Maple Leafs lead the series 3-2 but if he didn’t turn those pucks over it could’ve been a different story.
Looking at his production, it’s pretty much what I expected to be honest as he only has one goal and it came on the power-play as he tipped home a Spezza pass going directly to the left of Carey Price. It was a pretty tip nonetheless as he got just enough of the puck to change the direction to make it cross the line but other than his goal he really hasn’t been producing a lot offensively.
However, I feel like there are more than just on-ice things that Thornton is doing to help motivate this Maple Leafs team and pushing them towards victory and it’s obviously his leadership and experience that can really help this team push towards the finish line. One more area where I think he could maybe be better in is his physicality, and of course, I’m not saying he should be running guys over and fighting people, but I feel like if we see the same Thornton we saw in the last two or three weeks of the regular season with him trying his hardest out there and him finishing almost all of his checks, then I think it could go a long way in this game 6 and he can truly make a difference and set the tone for the team as well.
We’ve even been seeing Sheldon Keefe start Wayne Simmonds on the Matthews line so he can set the tone early and help energize the boys and it has honestly worked more often than not.

2021 playoff stats – 5 GP – 1 G – 3 A – 4 PTS – 22:26 TOI
Now comes the bigger guys on the team, and there are probably some people that disagree with this but I know there are some who feel the same way as I do, but I just don’t feel like we’ve seen the regular Auston Matthews in this series so far. He has recorded one goal and three assists through five games and you’re probably thinking that is still pretty good, but three of those four points came in game two when they won 5-1. His other point, which is an assist came in game 5 when he assisted on Zach Hyman’s goal that made it 3-1 Montreal.
For someone who just won the Rocket Richard and won it pretty easily leading the league with 41 goals this season, he’s having one of his worst playoff performances scoring-wise as he’s currently shooting just 4.0%. That 4.0% is the second-worst shooting percentage of his playoff career, the worst was in 2018 where he shot an even worse 3.7% against the Boston Bruins where he only had one goal in that series as well.
Other than his goal-scoring that is kind of MIA right now, Matthews has done a very good job in the face-off department, playing well defensively and even his physicality has really ramped up in this series and currently has 19 hits in five games which is a new career-high for him as his previous career-high was 14 when he set that back in the 2018 playoffs. One thing I will say though for Matthews, he’s getting his looks in games, they may not be as clean as a look as he and all of us would like but he’s been getting his shots and opportunities and it’s honestly just a matter of time until he starts potting more goals home and helps lead this Toronto team to a potential series victory for the first time in 17 years.
It’s not like he’s not trying out there, to be honest, there could be an argument to have him in my top five for players who have been good this series because he’s doing everything else great besides putting the puck in the back of the net. If there is a player that can show up huge in an important series-clinching game, it’s Auston Matthews for obvious reasons. He’s proven time and time again that he can come up big in games and carry this team to victory, so if he does indeed have his breakout game in game 6 and help lead this Maple Leafs team to victory, I wouldn’t be surprised. He’s by far their best player that can basically do it all on the ice, however, it’s time he has that breakout game and absolutely goes off.

2021 playoff stats – 5 GP – 0 G – 4 A – 4 PTS – 23:45 TOI
Mitch Marner just hasn’t been the Mitch Marner that we’re used to seeing and it sometimes gets frustrating not seeing him play up to his standards offensively. In this series, he’s been an absolute stud on the penalty kill for this team, there is no denying that and he’s honestly been a huge key factor for why their penalty kill has been so good through five games. However, it’s his offensive game that really hasn’t shown up on the scoresheet at times this series and when it has it’s been secondary assists as two of his total four assists have been secondary assists, something that is not Marner-like, that’s for sure.
Marner, as we all know, is on the same line as Auston Matthews and between the two of them, they only have one goal to their name and as we all know again, that goal belongs to Matthews and it came in game 2 off a shot for opportunity by Justin Holl. If Toronto wants to make a statement and secure this series in game 6 against Montreal tonight, their big boys are going to have to be their big boys and come up in the clutch to help lead this team to victory.
Marner hasn’t been able to find the back of the net for quite some time in the playoffs, as his last goal came against the Boston Bruins in game 1 of their 2019 first-round series, yeah, I know, that was two years ago. Just like Matthews, if there was a player and a time for someone to step up and help lead their team to victory, it honestly could be Mitch Marner as we’ve seen some monster games from him throughout his young career so far.
Just like Matthews again, it’s just their offensive game that isn’t showing up on the scoresheet, other than that, they’ve been fine everywhere else in my opinion. They both have been good defensively and haven’t given up anything, they’re finishing their checks, they’re getting their chances but they just can’t find the back of the net and having only one goal between them in five games is just not good enough for the type of players they are.
Uncategorized
Recent articles from Joseph Zita