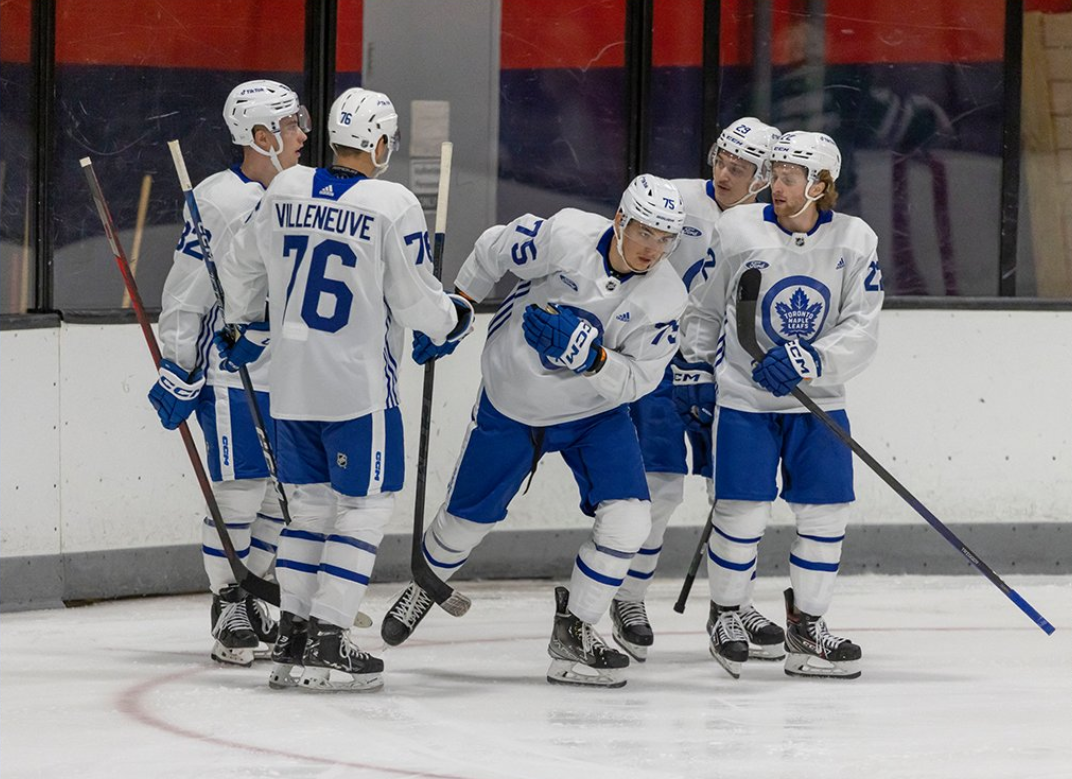 By Nick Barden
2 months ago
The Maple Leafs’ time at the Traverse City Prospect Tournament has come to an end, but now the true fun begins.
Toronto finished the tournament with a 1-2-1 record, only being able to defeat the St. Louis Blues’ prospects in their first game. Although finishing off their trip to Traverse City with a record that could’ve been better, there’s still plenty of positives to take out of the experience.
Alex Steeves led the Maple Leafs’ prospects in points throughout the tournament with four in three games. Graham Slaggert finished with three points in three games, while both Max Ellis and Pontus Holmberg had three points throughout four games.
Semyon Der-Arguchintsev and Slaggert led Toronto in goals, each with a pair during the tournament. Pavel Gogolev finished with the most shots on goal for the Maple Leafs, hitting the net 16 times in four games.
Keith Petruzzelli finished with the lone win in Traverse City and sported the best save percentage (.891) of all the Maple Leafs’ goaltending prospects.
The most difficult part for Toronto was their power play, which didn’t put a single puck into the net throughout the tournament. They went 0-for-15 in the four games played in Traverse City.
Aside from that, though, there were some fascinating individual performances — some even coming out of nowhere.

This might’ve been the biggest surprise from the Maple Leafs’ side of prospects. From watching all four of his games, there wasn’t one where Gogolev looked disengaged or missing from the game.
Although only having two points, the 22-year-old entered the Prospect Tournament with something to prove, and he did just that.
“Just to take game by game, take one game at a time, and just prove to everyone that I can definitely do better than what I did last year.” Said Gogolev to the media when asked what he wanted to accomplish in Traverse City this year.
After a fascinating season which found him first in the AHL with the Marlies before landing in Newfoundland with the Growlers, the 22-year-old is looking to rewrite the narrative around him. Finishing with the most shots of all the players at the tournament (16 in four games) really allowed him to stay engaged.
The next stop for him is likely Maple Leafs training camp — before heading down to the Marlies’ camp — where he hopes to land a full-time role back in the AHL once again.

There wasn’t many expectations around how Slaggert would perform at the Prospect Tournament. After signing an AHL deal with the Marlies last spring, the 23-year-old is now entering his first year of professional hockey.
He spent four seasons with Notre Dame and was the captain of the team in his final season. Slaggert is a very well rounded player, who’s very good at both ends of the rink. He began the tournament centring the fourth line, before joining Toronto’s first line alongside Holmberg and Tyvoit as Steeves, Nick Robertson, and Nick Abruzzese were all out.
Both of the 23-year-old’s goals in Traverse City game from deflections — one off of Max Ellis’ shot and another from Pontus Holmberg at the point.
Whether it’s his skating, his physicality, or his knowledge with and without the puck, Slaggert is beginning his tenure in the Maple Leafs organization on a positive note.
He’ll be the only who decides where he begins his professional career — either on the Marlies or with the Newfoundland Growlers.

I’ve kept on eye on Rifai ever since his strong play at Maple Leafs development camp back in July.
The 24-year-old defenceman — coming from Harvard — has a lot of fascinating attributes from his physicality to his strength aroundthe puck. Although he’s signed to an AHL deal with the Marlies, some could argue that his play from the Prospect Tournament could warrant an NHL deal.
Rifai showcased his strength earlier this summer at Maple Leafs development camp where he out-muscled top prospect Matthew Knies for the puck. He seemed to do it was ease as well.
The 24-year-old has everything you’d want for a defender. He’s very good at reading plays before they happen, getting the puck up the ice, and is very strong in his own zone. Add that together with his strength and physicality, and you have yourself an interesting prospect for the future.
Having a successful time in Traverse City will allow him to enter Marlies training camp with a lot of confidence. And as we know with many players, confidence can take you anywhere in this game.
Similar to Slaggert, he’ll be the one to decide whether he stays in Toronto when the regular season gets underway.
Aside from the standouts I didn’t see coming, there were a few main players who had successful tournaments. Robertson, Steeves, Abruzzese, and Holmberg — the players who were meant to have great tournaments — did in fact have a successful trip to Traverse City.
Again, as well, the record wasn’t probably what Toronto wanted to see at the end of the tournament. However, I’m sure the Maple Leafs’ staff got a lot of information about the prospects in the five days they spent down in Michigan.
With Toronto only having one contract slot remaining, though, I’m not too sure anyone from the Prospect Tournament will receive an ELC in the next few days.
More from TheLeafsNation.com: