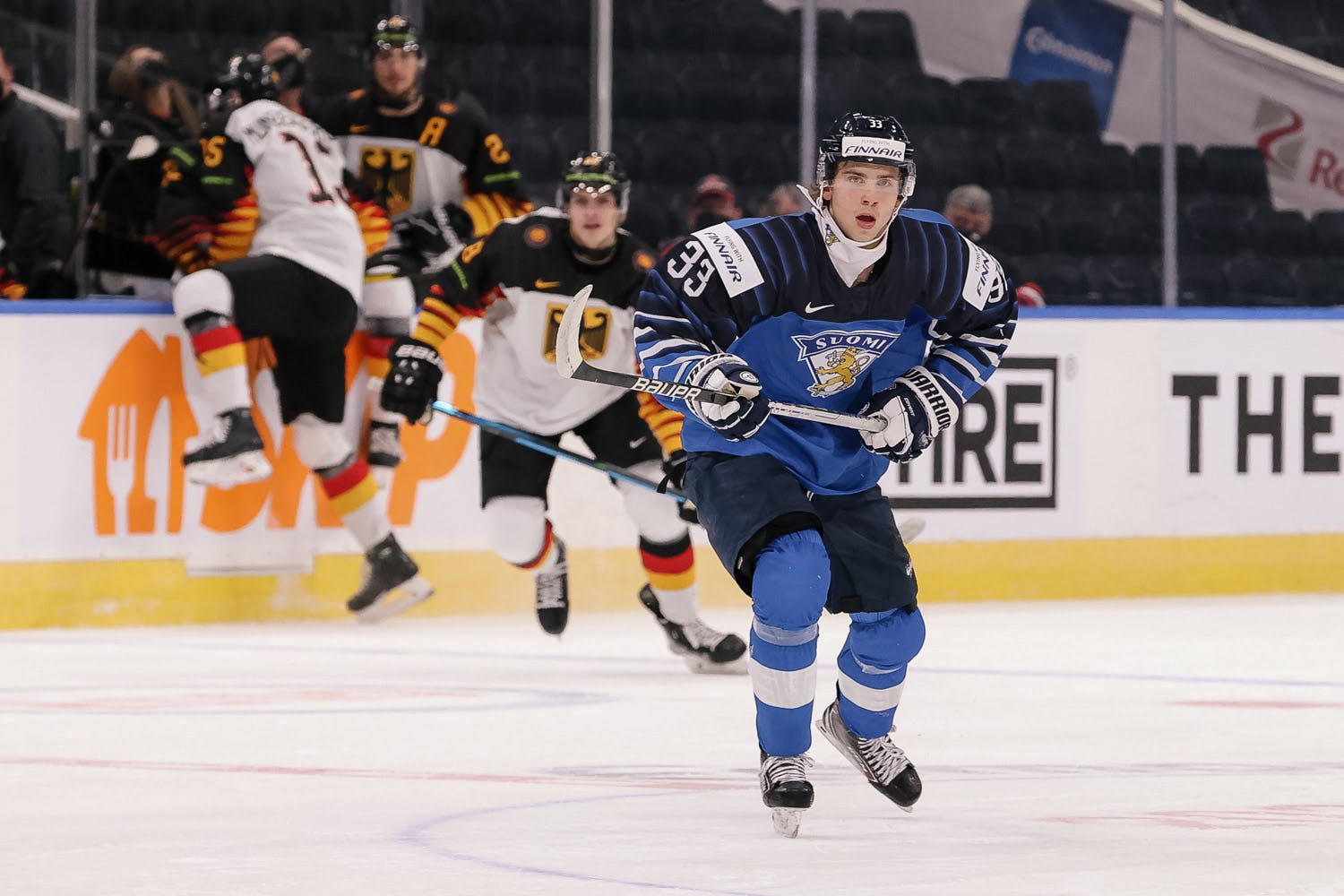 By Kyle Cushman
4 months ago
The 2022 NHL Entry Draft is less than a week away and the offseason is about to kick into high gear.
For the Maple Leafs, the first step of the offseason process comes next Thursday, when they are set to select in the first round for the first time since drafting @Rodion Amirov 15th overall in 2020.
While the 2020 draft when pretty much as expected through the first 15 picks, with minimal surprises or fallers, the 2022 draft does not appear to be the same. Outside of a consensus top three prospects (the order of which varies quite a bit), the draft is set to be one of the more unpredictable in recent memory.
As a result, multiple prospects that have landed inside the top 15 on the consolidated board quite very well end up still available come the Toronto Maple Leafs first-round pick at 25th overall.
Excerpts for each prospect are taken from Nick Richard’s final 2022 draft rankings, while statistics are pulled from Pick224 and Elite Prospects.

Frank Nazar ticks a lot of boxes as a top prospect entering the draft. He was a star for the USNTDP this year, producing as one of the top players with the program. His 35 points in 24 USHL games with the program put him fourth in the league in points per game and second among draft-eligible players, only behind teammate and expected top-three pick, Logan Cooley.
Nazar was also a major component of the USA’s dominant World U18s squad that somehow lost the gold medal game, scoring nine points in six games at that tournament.
Nazar has the pedigree and results. What he doesn’t have is the size.
Listed at 5-foot-10 and 180 pounds at the NHL Combine, Nazar’s lack of size is the primary knock against him. His style of play has drawn comparison to @Brayden Point, yet it appears NHL teams aren’t so ready to do the same.
Despite ranking 8th on the consolidated list, inside the top ten and even the top five for some, Nazar came in at a lowly 15th on Bob McKenzie’s final rankings.

It’s unlikely Nazar falls all the way to Toronto at 25th overall, but a drop to the late teens is well within possibility. If it does happen, someone’s landing a darn good prospect much later than he should go.

Nazar is something of a buzzsaw out there with the way he is constantly flying around the ice and pressuring opponents with his speed. He has good hands and vision but really causes problems for opposing defenders with his propensity for getting into the slot or freeing himself up around the net. He uses that speed well off the puck as well, consistently hunting for lanes or open space to make himself available as a passing option. His shot is dangerous and deceptively heavy for a smaller player but it is his ability to find those chances in dangerous areas that makes him such a threat in the offensive zone. Nazar processes the game quickly and has good defensive awareness but lags just a little bit behind Cooley in terms of the consistency he plays with. That said, he has the potential to grow into an offensively gifted top-six forward who plays a responsible defensive game, whether it be down the middle or on the wing.
– Nick Richard

Oh, the Russian factor.
I wrote more in-depth about the Russian factor earlier this week, detailing how the fallout from the Russian invasion of Ukraine has impacted the potential development paths for prospects based in Russia and how that subsequently is expected to see them fall down draft boards next week.
Danila Yurov, the top-ranked prospect based in Russia, is the first of a handful of prospects anticipated to see be affected by this.
Coming into the season, Yurov was a potential top-five prospect. A lack of ice-time in the KHL saw his stock drop slightly but remained inside or on the fringe of the top ten on most public lists. With the Russian factor hovering, though, it’s expected he goes a fair bit later.
Yurov was still ranked 14th on Bob McKenzie’s rankings, a slight drop from where he lands on the consolidated list but nothing too drastic. And while the scouts McKenzie talked to still may be moderately high on Yurov, there’s a big difference between liking the player and getting clearance to make the selection.

With the uncertainty surrounding the future and development opportunities for prospects in Russia, Yurov could easily fall into the 20s or further.
If he does, and the Maple Leafs feel comfortable drafting a prospect out of Russia, it would be tough to pass on a prospect with the combination of a high floor and upside that Yurov possesses.

Yurov plays a mature, straight-ahead game but also has the skill to slow things down or beat defenders one on one. He is a technically sound skater who pushes the pace and works hard in all three zones, which often leads to offensive chances for his team. Yurov has great puck skills, a heavy and deceptive release on his wrist shot, and he can play through traffic into the middle of the ice. He does well to protect pucks in tightly contested situations, not only with strength and body positioning but with his ability to control the puck from a variety of hand positions. When, or if, he will be able to play in North America is the biggest concern but he has all the potential to be an impactful two-way forward who can play top-six minutes in the NHL.
– Nick Richard

Denton Mateychuk has quietly become a bit of a divisive player in this draft class. While there are some exceptions, it feels like you either love the player and have him inside or just outside of your top ten or are unsure of his NHL projection and have him in the mid-20s.
What Mateychuk brings to the table not only makes him one of the most fascinating players in the 2022 class, but also a potential perfect fit with the Toronto Maple Leafs.
Mateychuk is all about activation. In fact, it’s probably more appropriate to list his position as the 1920’s “rover” rather than a defenceman. He’s more than game to jump up in the play and lead the rush, something the Maple Leafs are keen on their defencemen doing as showcased best by @Morgan Rielly. Mateychuk also comes from the same junior team as Rielly, playing for the Moose Jaw Warriors.

With 64 points in 65 games this season, Mateychuk was one of the top offensive defencemen in the WHL, finishing top five in league scoring among defencemen and taking the top spot among draft-eligible blueliners.
It’s not much of a surprise to learn that NHL teams are more apprehensive about Mateychuk’s aggressive game and lack of size, listed at 5-foot-10.5 and 194 pounds at the NHL Combine, as he landed at #24 on McKenzie’s list this week. That puts him just one spot ahead of where the Maple Leafs select, making him a legitimate possibility to still be on the board come to the Leafs first draft pick.

An undersized defenseman, Mateychuk utilizes high-end skating ability and vision to drive play from the back end. He is incredibly shifty with great four-way mobility that he uses to elude oncoming forecheckers, walk the offensive blue line with poise, or close on an attacking forward and force him to the outside. Mateychuk shows great poise with the puck on his stick and can pick apart opposing defenses with crisp passes through layers of coverage, both on the breakout and in the offensive zone. Everything about his game is just smooth and he does a good job of knowing when to push for offense and when to hang back to cover his defensive responsibilities. He defends well for his size due to his skating ability and hockey sense and I think if he were a couple of inches taller, he would be a surefire top-10 pick in this draft.
– Nick Richard

At one point, Brad Lambert was seen as the top challenger to Shane Wright as the top prospect of the 2022 draft class. Fast forward to the week before draft day, and it’s uncertain he’ll even be a top 20 pick.
Lambert’s fall this year has been tough to watch. Whether it was poor puck luck, a lack of fit on his club teams, or legitimate weaknesses in his game (it’s all three), Lambert went from a budding star to a massive question mark in less than a year.
This year in Finland’s top league, Lambert saw his production regress from his DY-1 season. He scored just 10 points split between two teams in 49 games, a very disappointing showing from a player known for his speed and skill.

It’s that speed and skill that makes him such an interesting prospect despite the lack of production. Lambert is regarded as the best skater in the class and he has the skill to back it up, it just didn’t click for him this season. Whether that’s indicative of flaws in his game, such as a lack of awareness and poor utilization of his teammates, or more based on the teams and systems he was put in this year, we will find out soon enough.
What it does mean is that whatever team takes Lambert, whether he gets to the Leafs pick or not, it doesn’t get much more boom or bust in the 2022 draft class.

Despite all of those concerns, Lambert’s raw skill remains enticing. He is an elite skater with great top speed and outstanding agility – skills he puts to use in the transition game, routinely dancing through the neutral zone with possession to create clean entries into the offensive zone. He displays good vision when presented with time and space but can struggle to make things happen when he is under pressure or when he is forced to utilize his teammates more. I wouldn’t call Lambert a pure sniper but I think his shot is more dangerous than some give him credit for and he can run a powerplay from the half-wall. Overall, there is a lot to like about Lambert’s skill set but the concerns about his awareness and consistency of effort are warranted.
– Nick Richard