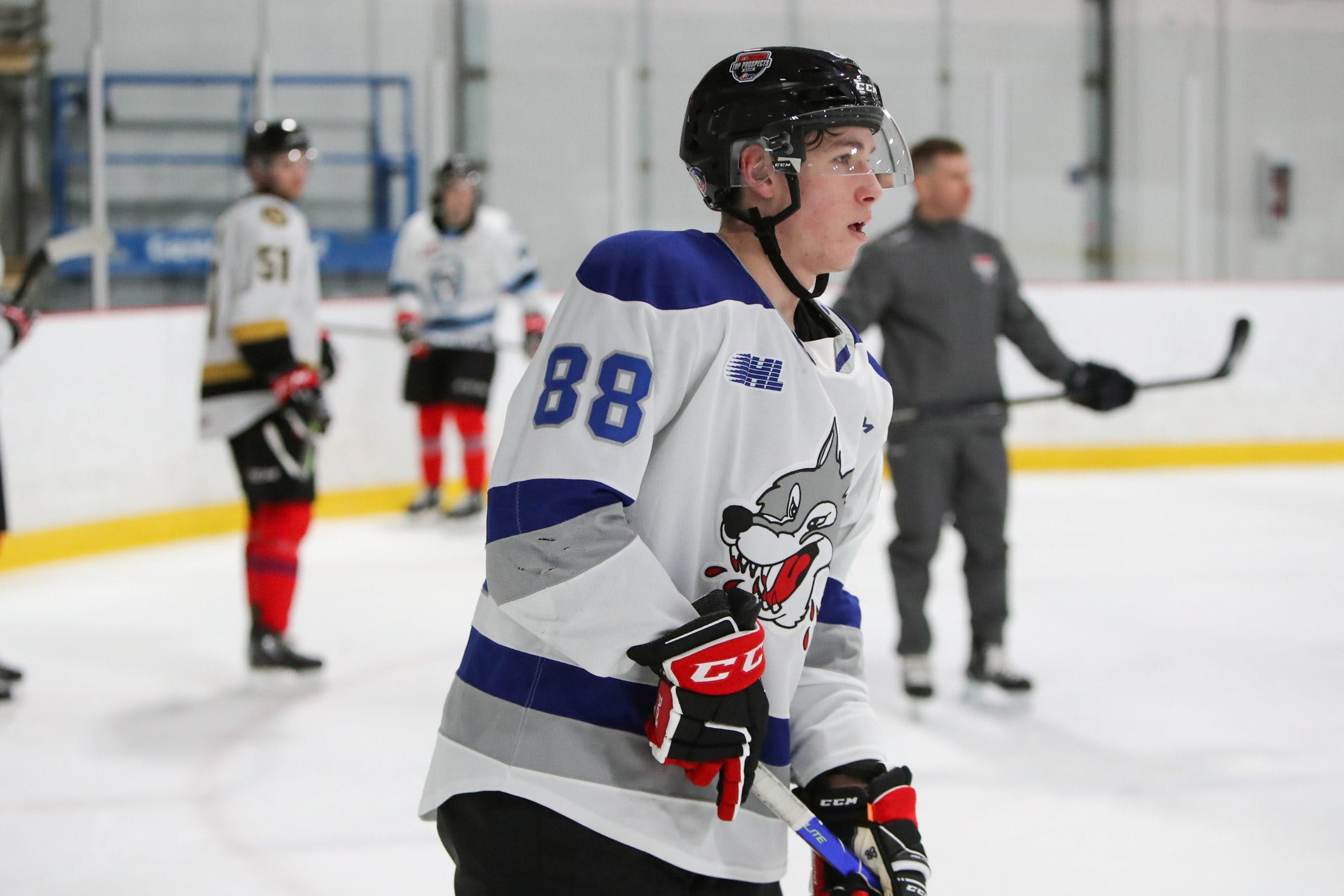 By Kyle Cushman
7 months ago
The 2022 IIHF U18 Men’s World Championships are set to begin this weekend in Germany for one of the premier pre-NHL draft events on the calendar.
Due to the international ban on Belarus and Russia, eight teams rather than the usual 10 will be competing in this year’s tournament. Canada, Czechia, Germany, and the United States comprise Group A, while Finland, Latvia, Sweden, and Switzerland make up Group B.
Not all top prospects for the 2022 NHL Entry Draft will be at the event. As a U18 tournament, players born in 2004 and later are eligible. 2003-born top prospects for the 2022 draft such as David Jiricek and Brad Lambert are too old to play. Additionally, the Canadian Hockey League playoffs have only just begun and numerous top prospects have not been made available due to their respective team commitments.
Still, there is plenty of 2022 draft talent on display in Germany over the next week and a half, in addition to the exciting mix of 2023 and even 2024 top prospects as well.
This year’s U18 tournament has plenty of interest for the Toronto Maple Leafs, as they currently hold a first-round pick for the 2022 draft. With the tournament beginning on Saturday, here are five prospects to keep an eye on during the U18s that could be first-round targets for the Maple Leafs in July.

Defenceman Seamus Casey had a very strong season with the USNTDP in 2021/22. As one of the oldest players at the U18 tournament as a January 2004 birthday, he should be one of the key contributors for an American squad with aspirations of gold.
Casey ranked second in the USHL this year among first-time draft eligible defencemen in points-per-game, only behind teammate Lane Hutson. The 5-foot-10 blueliner often lined up in a second pair role behind Ryan Chesley on the right side of the USNTDP’s defence, something I would imagine we see again at the U18s.

Known more for his offensive game, Casey also had fantastic two-way results in the USHL. As of Pick224.com’s last USHL update on March 31, opponents had scored just four times at even strength with Casey on the ice in 15 games played. His 81.8 percent goals-for rate ranks best in the USHL among qualified defencemen, with his defence partner Tyler Duke the only other defenceman within eight percent of his mark.
Casey is a player who has been ranked all over the place this season. TLN’s Nick Richard had him ranked 13th in his rankings earlier this year, lauding his skating and offensive skills. At the same time, though, Bob McKenzie’s rankings had Casey as a second-round prospect, down at 44.
As an undersized, offensive-leaning defenceman, it’s easy to see a scenario where Casey falls from the high teens where he is currently ranked on many public rankings to later in the first round on draft day, potentially into the lap of the Maple Leafs.

David Goyette (no relation to Danielle) flourished on a poor Sudbury Wolves team as an OHL rookie in 2021/22. He led the OHL in goals and points among first-year OHLers and will be looking to build off of his strong year by being one of Canada’s top players at the U18s.
The 5-foot-11 centre led the Wolves in goals by 11 and in scoring by 23 points, a very impressive campaign that sees him rank 12th in the OHL in even-strength involvement percentage (percent of team goals a player scores a point on at even strength). In fact, only consensus top prospect Shane Wright is the only 2022 first-time draft-eligible to be more involved in his team’s even-strength scoring this year.

With an 18.5 percent shooting percentage and just 8.5 shots per 60, Goyette’s 33-goal season is likely a bit inflated relative to his true goal-scoring talents. This is not much of a concern, though, as Goyette’s main strength is as a playmaker. Playing on a bottom-five offensive team in the OHL makes his 70-point season all the more impressive, as he was facing top competition every night.
Goyette has been consistently ranked in the late first, early second-round range as of late. Notably, he was only an honourable mention on Bob McKenzie’s rankings in January, though a fantastic end to the season surely will see him rise significantly from that ranking. In Craig Button’s March rankings, Goyette was inside the top 20, coming in at 17.
An excellent skater, watch out for Goyette if he gets to play with the likes of Connor Bedard and/or Adam Fantilli at the U18s. A big point total could see his draft stock rise quite a bit.

There are few qualities the Toronto Maple Leafs seem to covet more than strong transition play and strong skating. That’s the name of the game for Jiri Kulich.
After spending nearly the entire season in the Czech league, the U18s will be a massive opportunity for Kulich to raise his draft stock by getting to play against his peers. It’s easy to see the gaudy point totals of those playing in junior leagues, then look at Kulich’s 14 points in 49 games this year and dismiss him as a potential first-round candidate, but that fails to recognize the difficulty of playing regular minutes in a men’s pro league.
A big tournament from Kulich as a leader for Czechia could see him do a lot for his draft stock. His rate of production in the Czech league was solid but did rank behind recent draft eligible seasons from the likes of Martin Kaut (2018 16th overall), Martin Necas (2017 12th overall), and Jan Mysak (2020 48th overall). That being said, Kulich’s two-way results are the best of them all.
Kulich will be looking to replicate his strong Hlinka Gretzky performance from the fall, where he scored three goals and four points in four games for Czechia. A strong showing once against his peers would do a lot for his draft stock, which currently sees him as a late first to second-round prospect.

There’s more to Rutger McGroarty than just a fantastic name. Playing a secondary role with the USNTDP, McGroarty had a strong season offensively, ranking fourth in the USHL in points per game among draft eligibles, but also had elite two-way results.

A left-winger that can move to the middle if needed, McGroarty outscored opponents 28-9 while on ice in 2021/22 at even strength. His 75.7 percent goals-for rate ranked second in the USHL among qualified forwards. McGroarty was much more involved at even strength than on the powerplay in terms of his production as well. As of March 31, he had scored eight goals and 22 points at even strength, compared to just four total powerplay points.
At 6-foot-0 and 205 pounds, McGroarty plays a power forward style. He isn’t a speedster by any means but makes up for it with his skill and offensive awareness. He’s also a strong forechecker, something the Leafs valued and targetted with the selection of Matt Knies in 2021.
We’ve seen the Leafs draft players with skating concerns in the past, trusting in their development staff to improve prospects in this regard. That will be the task for whichever team selects McGroarty in July, as the rest of the tools are there.

The final player we’ll take a look at today is Sweden’s Calle Odelius, one of four potential first-round picks out of the Djurgardens system.
Odelius had a strong offensive season in the Swedish junior league, leading the J20 Nationell in points among draft-eligible defencemen with 30 in 40 games. He made a cameo at the SHL level as well, appearing in seven games for Djurgardens in 2021/22.
This year in the J20 Nationell, he averaged 20:12 per game as the top defencemen for Djurgardens J20. While he probably won’t be a powerplay quarterback in the future, his production this year was fairly split between even strength and on the man-advantage. Odelius scored six goals and 18 points at even strength, compared to one goal and 12 points on the powerplay.
While Odelius has the skillset to play the modern two-way defenceman game, his on-ice goal results indicated a tough season defensively. He was barely break-even in goal share at 42-39 at the J20 level, coming while playing on a dominant team. His 51.9 percent goals-for rate was 15.7 percent below Djurgardens’ rate with him off the ice in 2021/22.

Judging defensive ability based solely on goal results is never ideal, as Odelius may have simply been a victim of a poor PDO and on-ice save percentage. Djurgardens did have Sebastian Trygg play in 23 games with a .876 SV% after all, though fellow 2022 draft-eligible teammates Jonathan Lekkerimaki, Liam Ohgren, and Noah Ostlund all had significantly better metrics.
Additionally, Odelius struggled in limited minutes at the SHL level, with a Corsi-for rate below 42 percent.
Odelius will certainly play a big role for Sweden at the U18s and I’ll be keeping a keen eye on his performances. Coming off of a lacklustre Hlinka Gretzky in the fall with one assist in five games there, a strong tournament matching up against top competition could see Odelius rise from where is currently as an early second-round prospect.
More from TheLeafsNation.com
POINTSBET IS LIVE IN ONTARIO