Josh Ho-Sang was misunderstood. Now, he’s happy and playing the game he loves 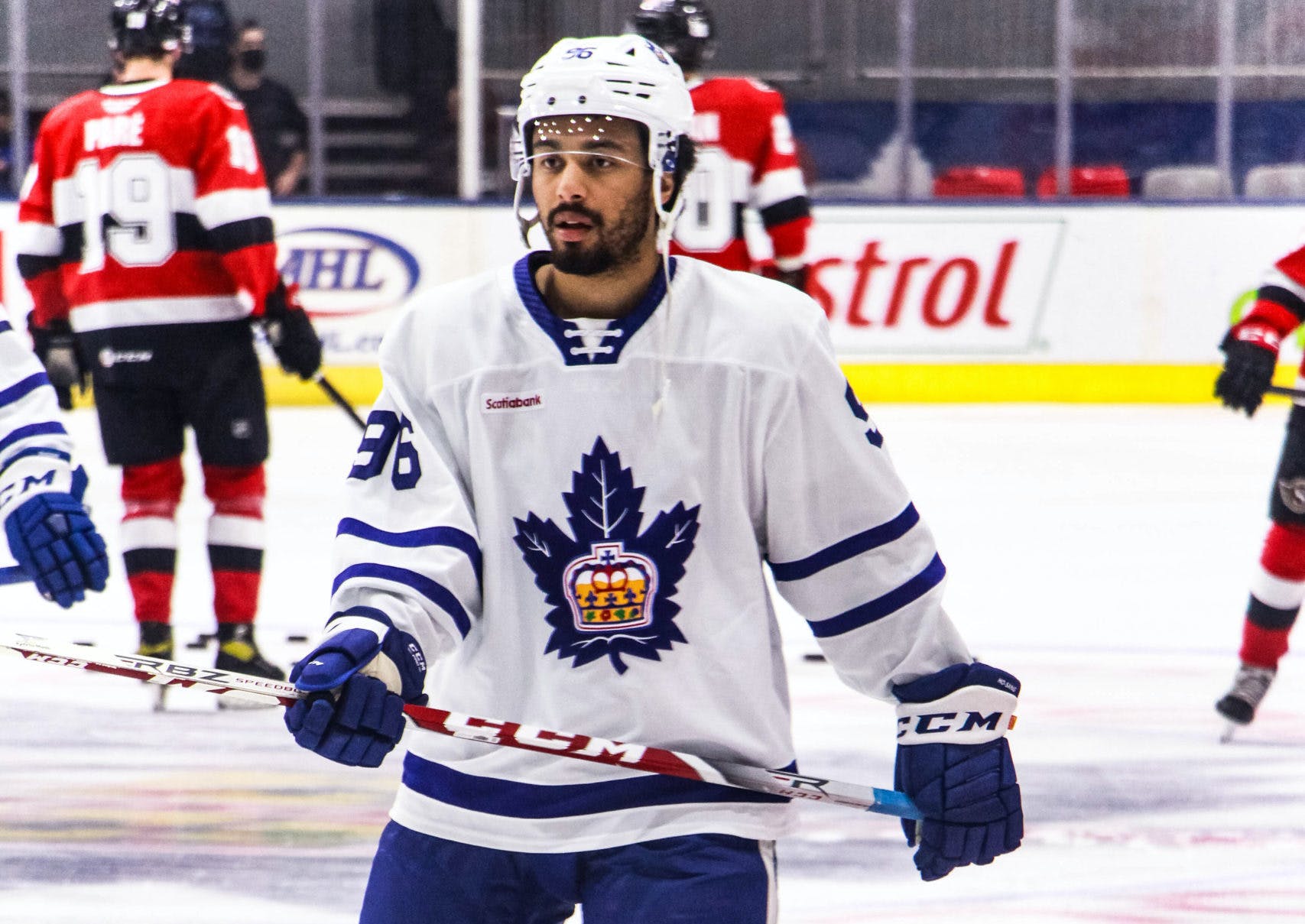 By Nick Barden
1 year ago
Josh Ho-Sang has been misunderstood by many people for a long time.
Drafted 28th overall by the New York Islanders in the 2014 NHL Draft, there was a lot of potential for him. Ho-Sang played a total of 53 games in the NHL. For someone drafted that high, it’s abnormal.
But he’s not like every hockey player. He’s different.
Ho-Sang has played many games in the American Hockey League, most with the Bridgeport Sound Tigers, the Islanders’ farm team. In February of 2020, New York loaned Ho-Sang to the San Antonio Rampage, where he only played six games.
Then the pandemic happened.
In February of 2021, New York sent him on loan to Sweden. Ho-Sang played five games with Orebro HK before going their separate ways due to Ho-Sang being what the team said was “far behind in training compared to the rest of the group.” He joined Orebro more than halfway through their season while amid a global pandemic.

“Sweden was awesome. Sweden was just a strange situation because they were like, 45 games into their season, and I was playing catch up. I hadn’t really skated because rinks were shutdown here [in Toronto].” Ho-Sang said on Monday.

After agreeing to part ways, he joined Linkopings HC, and that’s when everything changed.

“I would like to say a big ‘thank you’ to the people in Linkopings.” Ho-Sang said back in September at Leafs training camp. “The GM and the Head Coach there now — they did wonders for me as a person. And I’m not going to get too much into what we talked about, but the head coach in Sweden absolutely changed my life, changed my outlook on hockey.“

Ho-Sang spent the beginning of the pandemic enjoying his hobbies, which is music. In the summer of 2020, he released his debut song, which is called Learning.

“I love music. I make music all the time I got a ton that I would love to release at some point.” Ho-Sang said. “For me, that song was important for it to be my first song just to express who I am and where I’ve kind of come from.“

“I think that people forget that hockey players are people too. You can only spend so much time on your sport.” Ho-Sang said on Monday. “I think it’s just about finding something outside of hockey that makes you happy too. And that [music] was my way of sharing something that I do out of hockey that brings me joy. If I could help anyone through my music, that’d be really awesome.“

Ho-Sang said one of his favourite artists is J-Cole because he tries to speak to the kids. The stories he has can help younger people navigate through life. He also listed Alessia Cara, Common, and Drake. To him, they’re all musicians who have messages that they send through music.

“If you listen closely, they all have something to say.” Ho-Sang said. “Whether some guys hide it underneath surface stuff, they’re still talking to you about their past and the things that they’ve been through.“

What stood out to me is what he said about Justin Bieber’s latest album.

“Just talking about some of the things that he’s struggled with and gone through,” Ho-Sang said about why he liked Bieber’s album, “I think it’s really cool when people share their process and their pain because it makes people feel less alone.“

Every musician has a message to send, including the 25-year-old.

“I try to encourage people to be themselves.” Ho-Sang said. “It is important to keep that piece of you, like that innocence. I think that if you can carry that with you through everything that you do, then you’ll find a lot of success and you’ll find that you’re more happy. The more you are yourself, the more you’ll find people who are like you.“

Being himself has got him to where he is now. Part of it is being a professional hockey player, yes. But the massive portion is just being happy playing the game he loves in Toronto.

“People talk about my past and my mistakes. But like, if I didn’t do any of that, I wouldn’t have come here. I wouldn’t have found this place, I wouldn’t have felt so comfortable here.” Ho-Sang said. “It can be hard to be yourself, but it’s important because it’ll get you to where you need to be.”
“Some of the things that I’ve done and people have shunned me for, and I have no regrets about any of that stuff because like I said, I’ve come to a new environment where they embrace that and they say, ‘Hey, you can be you. Let us help you be a better version of you.’ That’s different than, ‘We want to change everything about you.’“

But being yourself isn’t always easy. There are a lot of people who unfortunately judge others for being themselves. At times that can suck, but the 25-year-old says if you stick through it, you’ll be happier.

“Like I said, the more you are yourself, the more you’ll find yourself in those environments but I’m not gonna lie to people and say that it’s not hard, that you don’t go through struggles, you don’t go through situations where you’re frustrated.” Ho-Sang said. “You do have to pay a price to be yourself, but I think that that’s the best way to live.“

Everyone is going to have ups and downs. It’s normal. How you handle those feelings at points in your life is crucial. For Ho-Sang, there are two phrases he stands by.

“First thing is, ‘Don’t take life too seriously, you’ll never get out alive.’ And the second one is, ‘It’s okay not to be okay.’ I think that that’s a big thing that you have to remind yourself. I think when we feel down, we get really negative, just naturally, you’re like, ‘Why do I feel this way?’ You take a step and you look at, ‘Ah, like I have a house or I have food, like how can I feel so negative and alone?’ And like, that’s not the point. You have to respect how you feel, and then you have to ask yourself why you feel that way, not why you shouldn’t.”
“And I think a lot of people do that is like when they get into that dark space they’re like, ‘I shouldn’t feel this way.’ And like, that’s not how you fix it. You have to ask yourself why you feel that way and then build from there. And I found that that really helped me because once you start asking yourself why, then it gives you room to grow and room to figure out maybe what’s not working for you.“

In the concourse at Ford Performance Centre, there was a sense of comfortableness in Ho-Sang’s voice.
But why does he feel so comfortable?

“I feel comfortable because they [the Leafs organization] let me ask questions. They don’t try to put me in a box.” Ho-Sang said. “That starts with Kyle [Dubas] and stems down all the way through the organization. I think that it’s so important to just embrace — especially like anyone — embrace creativity, embrace indifference. There’s ways to talk to people that’s not like black and white. For me, if I don’t agree with something, but you can explain to me why it’s important, why it brings value to the team, then I’ll do it. But I do struggle with, ‘Do this cause I said so.’ That doesn’t really work for me, and it works for some people and it’s a good skill to have, like there’s nothing wrong with it. But for me, I’m not wired that way.”
“This organization does a great job of encouraging players to be unique, and to be different and themselves. I think that with that mentality, everyone in the organization shares that so these coaches are more sensitive to how we feel. They ask us how you’re doing, not like how you’re playing, how are YOU doing. And to be treated as a human being and not a piece of meat, or just a number in a organization is so special. And I can’t really say much because I have not been everywhere, but I can tell you my experience here is above and beyond.“

Ho-Sang has been in a lot of organizations from junior up to today. He knows what’s out there. But he says that the Islanders just weren’t the team for him.

“It’s not that New York didn’t care about me, New York was amazing. They were kind and they tried their best to figure me out. I was just so different from what they wanted and that’s on me, not them.” Said the 25-year-old. “It’s just this environment is a lot more suited to my personality.“

So what’s next? He signed an AHL contract with the Toronto Marlies — his goal is to get into the Leafs lineup, right?
Nope.

“I’m not really focused on getting to that rink.” He said of the Leafs’ practice rink. “I’m happy where I am right now.“

Ho-Sang went on to say if the Leafs feel like they can use him, he’s “happy to serve.” But he’s happy where he is at this moment in time, and that’s all that matters.

“I just don’t really care anymore. I’m just not fixated on playing in the NHL. Like I love playing hockey. I used to be really bummed when I wasn’t playing in the NHL because that was my dream, but I shifted my focus to just ‘I get to play a game for a living.’” Ho-Sang said. “And that’s hard. You spend your entire childhood dreaming about playing in the NHL, and then someone says, ‘No, you’re not ready.’ And you’re like ‘I am!’ They’re like, ‘No you’re not.’ And that’s a tough pill to swallow at 18 to 21. You get rebellious and angry and you don’t have gratitude for situation that you’re in. And I think a lot of young guys struggle with that. But for me, like I said, I’m just grateful.”
“If it gets me to the NHL, awesome. If it doesn’t, I’m happy here.” Ho-Sang said with a smile on his face.

He’s where he wants to be, and that’s all that matters. He’s happy, loves the game of hockey, and is around incredible people.