Around the Atlantic: Looking at how each team’s prospects have fared at the World Juniors 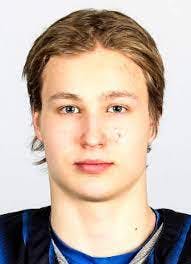 By Scott Ony
3 months ago
There hasn’t been much news around the Atlantic division over the past week, but there are several prospects from the division representing their countries at the 2022 World Junior tournament in Edmonton, Alberta.
The Detroit Red wings lead the division and the NHL with nine players at the tournament. The Ottawa Senators are second in the division with six and every team in the Atlantic has at least two. Here’s a breakdown of how each team’s prospects have fared so far through the round robin portion of the tournament.
Detroit Red Wings
CAN- Sebastian Cossa, G; Donovan Sebrango, D; USA- Carter Mazur, F; Redmond Savage, F D; SWE- Simon Edvinsson, D; Theodor Niederbach, F; William Wallinder, D; CZE- Jan Bednar, G; FIN- Eemil Viro
A third round pick in 2021, Carter Mazur has led the way for Team USA thus far. Through three games he is third in the tournament with four goals and is tied with San Jose Sharks prospect Thomas Bordeleau for USA’s team lead with six points. Red Savage is also a point per game player so far with two goals and one assist.
Coming off a WHL championship and appearance in the Memorial Cup, Sebastian Cossa started the first game for Canada saving 22 of 24 shots in a 5-2 win against Latvia. He hasn’t made a start since, and it looks like the net will be Dylan Garand’s going forward.
Donovan Sebrango is playing a key role on Canada’s top pair providing shutdown defence. He has two assists in three games.
Sweden has only played two games at this point and both Simon Edvinsson and Theodor Niederbach have a goal and an assist. Wallinder is yet to register a point.
Bednar has started two of the three games for Czechia and earnedtheir only win 5-4 against Slovakia. He has stopped 52 of 60 shots.
Viro hasn’t seen the net and is the third goalie for Finland.
Ottawa Senators
CAN- Ridly Grieg, F; Zack Ostapchuk, F; CZE- Tomas Hamara, D; FIN- Roby Jarventie, F; Leevi Merilainen, G; USA- Tyler Kleven, D
Canada’s Ridly Greig has been the standout prospect for the Senators in this year’s tournament. He has two goals and two assists so far while also providing physicality in a top six role. Ostapchuk has pitched in as well with two points.
Roby Jarventie has been one of many Finnish players scoring at a high rate. He now has five points in three games for what could be the strongest team at the tournament this year. Merilainen has played well and will be the starter throughout.
Tomas Hamara of Czechia and Tyler Klevin of USA have yet to score a point and are playing in a bottom pair role.
Florida Panthers
USA- Mackie Samoskevich, F; CZE- Jakob Kos, F; LAT- Sandis Vilmanis, F; FIN- Kasper Puutio, D; SWE- Ludvig Jansson, D
Florida’s fifth round pick in 2020, Kasper Puutio now has three goals and five points for Finland in three games. Not known for his offence, he is having a breakout performance in Edmonton.
One of several University of Michigan players at the tournament, Mackie Samoskevich has three assists in three games.
Kos, Vilmanis and Jansson haven’t scored a point in the tournament.
Montreal Canadiens
CAN-  Joshua Roy, F; Riley Kidney, F; CZE- Jan Mysak, F; FIN- Oliver Kapanen, F; Petteri Nurmi, D
One of the surprises of the tournament, Joshua Roy is third on Canada with five points in three games. He was a fifth round pick in 2021 and is outscoring plenty of players drafted well above him. Kidney has played in just one game.
Jan Mysak is wearing the “C” for Czechia and also leading them in scoring with five points.
Oliver Kapanen got on the board earlier today with his first goal of the tournament in a 9-3 win for Finland. Nurmi, a seventh round pick this year hasn’t scored a point.
Boston Bruins
F; SWE- Fabian Lysell, F; USA- Riley Duran, F; LAT- Dans Locmelis
Lysell is Boston’s most highly touted prospect at the tournament this year. He is tied for Sweden’s team lead in points with three in two games.
Duran, a sixth round pick in 2020 is another surprise at this year’s tournament. He trails only Mazur and Bordeleau on USA with five points in three games.
Locmelis was a fourth round pick in the 2022 draft. He has one goal for a Latvian team that is outmatched. They have scored just six as a team in three games.
Toronto Maple Leafs
FIN- Roni Hirvonen, F; Topi Niemela, D; USA- Matthew Knies, F
While Knies was expected to be the top scorer among Leafs’ prospects at this tournament it has been Roni Hirvonen who has stood out. With a goal and an assist earlier today, he now has six points in three games. Niemela has two assists.
Knies had a massive season for the University of Minnesota in 2021-22 scoring 33 points in 33 games but he hasn’t been able to find the scoresheet much at the Juniors. He has just one assist in three games.
Buffalo Sabres
CZE- SWE- Isak Rosen, F; Linus Sjodin, F; Jiri Kulich, F
The 14th overall pick in 2021, Rosen is tied for Sweden’s team lead with three points in two games. Sjodin hasn’t scored a point yet.
Jiri Kulich was the third of three first round picks for the Sabres this year. He is second on Czechia with three points in three games.
Tampa Bay Lightning
CAN- Jack Thompson, D; LAT- Klavs Veinbergs, F
With three assists in three games, Thompson is one of three Canadian defenders to score at a point per game pace so far.
Veinbergs was a seventh round pick in the 2022 draft and has arguably been Latvia’s best player in the tournament. Scoring a goal and an assist so far, he is one of four Latvians with more than one point.
More from The Leafs Nation:
Uncategorized
Recent articles from Scott Ony