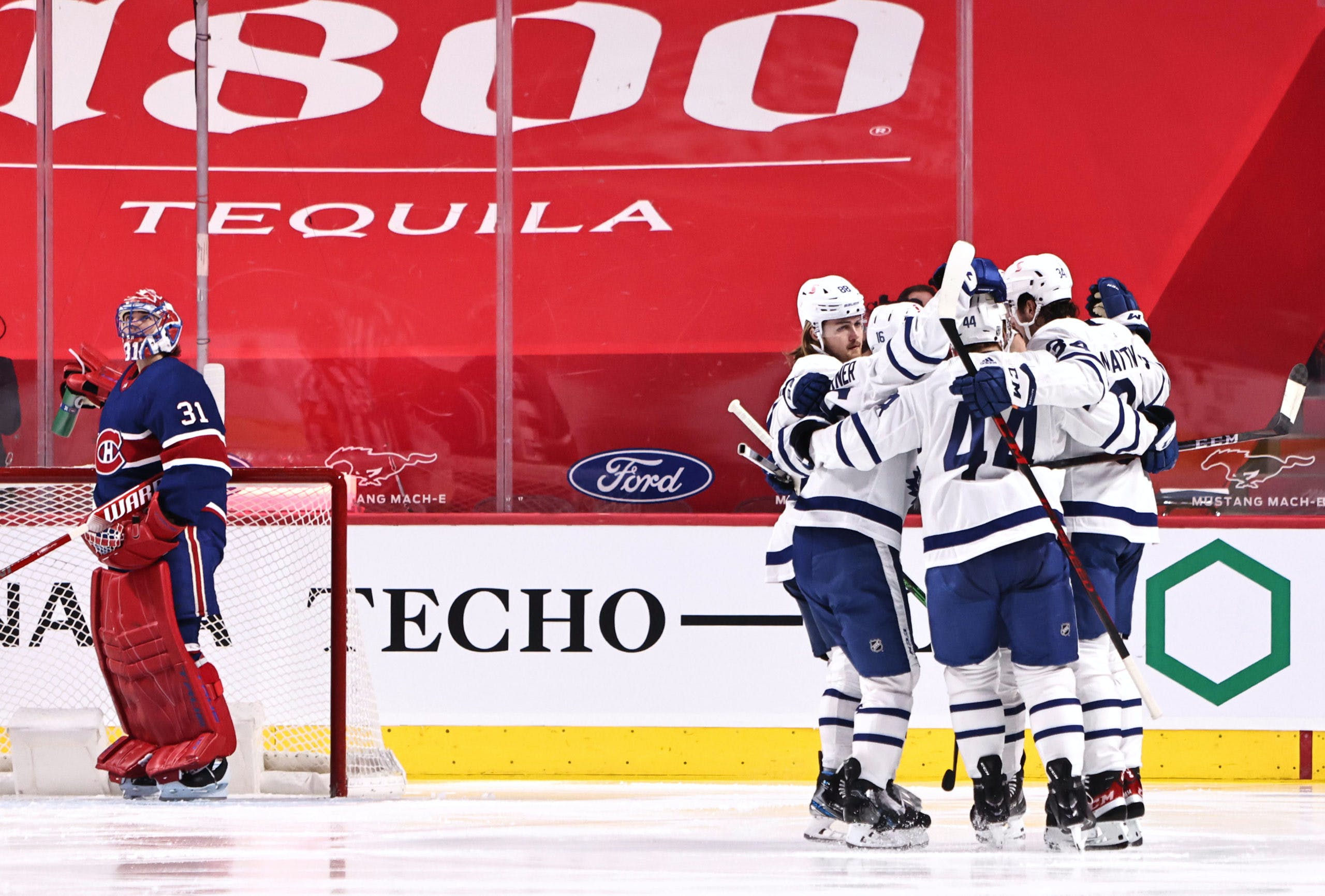 By Roxanne Khasow
1 year ago
The rivalry between the Toronto Maple Leafs and the Montreal Canadiens is as exciting as ever and the Leafs were looking to remind the Canadiens why they’re currently first place in their division and the league.
As the puck dropped for the first period at the Bell Centre, both teams were ready to go. The Toronto Maple Leafs were feeling good after back-to-back wins against the Ottawa Senators, and the Montreal Canadiens had a week off after a 2-1 win against the Leafs last Saturday. The Leafs had a few good shots from William Nylander and Ilya Mikheyev, but Carey Price was strong in net and nothing was getting past him. On the other side of the ice, the Canadiens went almost half a period without a shot on goal, and once they got the shots going, Frederik Andersen was holding it down for the Leafs. With less than a minute left in the first period, Victor Mete and Ben Chiarot were called for Hooking and Delay of Game, and the Leafs would go on a 5-on-3, which would continue into the second period. The Leafs ended the first period outshooting the Canadiens 13-10 looking to convert on their Power Play.
With the Leafs’ 5-on-3 Power Play carrying over into the second period, the boys were looking to get something going. Just as the first penalty was about to end, Auston Matthews opened the scoring with his 300th regular-season goal of his career, as he got one past Price after a beautiful pass from Mitch Marner, which gave the Leafs a 1-0 lead.
And it didn’t stop there! Just 15 seconds later, Travis Boyd got another to the back of the net off a feed from Joe Thornton. The boys were on fire, and were leading 2-0.
But the Canadiens weren’t going to let the Leafs have all the fun. Just over three minutes into the period, Jesperi Kotkaniemi put the Canadiens on the board with a shot that got behind Andersen. And, they managed to get another less than a minute later with a goal by Paul Bryon that tied the game at 2-2.
The Leafs were looking to regain the lead, and just over 7 minutes into the period, they were able to do that. With a play at the blue line by Matthews, and a pass to Marner, he was able to make it 3-2 as he finessed the puck past Price.
If you couldn’t tell by now, the second period was absolutely wild. Andersen made a few good saves from shots by Shea Weber and Jake Evans. Just over 15 minutes into the period, the Leafs went on another Power Play as Mete was called for Tripping, and the Leafs were able to convert off a play from Morgan Rielly to Matthews, as they were able strengthen the Leafs’ lead to 4-2.
The Canadiens were trying to get back into the game, and it looked like they had cut the Leafs’ lead to one goal, but Kotkaniemi’s goal was waived off for goaltender interference after a successful Coach’s Challenge by Sheldon Keefe.
As the puck dropped for the third period, the Leafs were looking to maintain their lead and finish the game off strong. Just over 13 minutes into the period, Alexander Kerfoot was able to get one past Price off a play by John Tavares to Jason Spezza, as they made it a 5-2 game.
With less than two minutes into the third period, Tyler Toffoli was able to get the puck just over Andersen’s stick and to the back of the net, making it a 5-3 game. Price headed to the bench for an extra player as the Canadiens tried to score a pair to tie the game back up, but instead Toffoli took a penalty for Slashing as the period trickled down, and the Leafs held on for the win in Montreal.
Most Valuable Leaf: Auston Matthews
I feel like I choose Matthews as my Most Valuable Leaf a little too often, but not only is he so much fun to watch, but he’s playing so well. He’s focused, making plays, and helping the team win (almost) every night. With 2 goals, and 2 assists, Matthews is without a doubt the MVP of the night. He might be #34 on the ice, but he’s the leader for goals in the NHL, with 16 goals, and #1 in our hearts.
Least Valuable Leaf: Justin Holl
This game could have gone in a different direction had the Canadiens scored a couple more and kept the momentum going. Justin Holl missed the puck on the Canadiens’ goal which allowed Byron to tie the game at 2-2, and also looked sloppy on a play in the first period where Josh Anderson almost scored. Overall, the Leafs needed to play a smarter game, but Holl can’t continuously make careless plays which in turn lead to goals.
Tweet of the Night:
I’m still not entirely sure why the referees called it a goal, then after a challenge, disallowed it due to goaltender interference, but hey, I’ll take it. Kyle Dubas felt what we all felt in that moment.
What’s Next?
The Toronto Maple Leafs look to add to their winning streak as they head back home to Scotiabank Arena, where they will take on the Calgary Flames on Monday February 22nd, at 7:00PM, don’t forget to catch the game on TSN.
Uncategorized
Recent articles from Roxanne Khasow