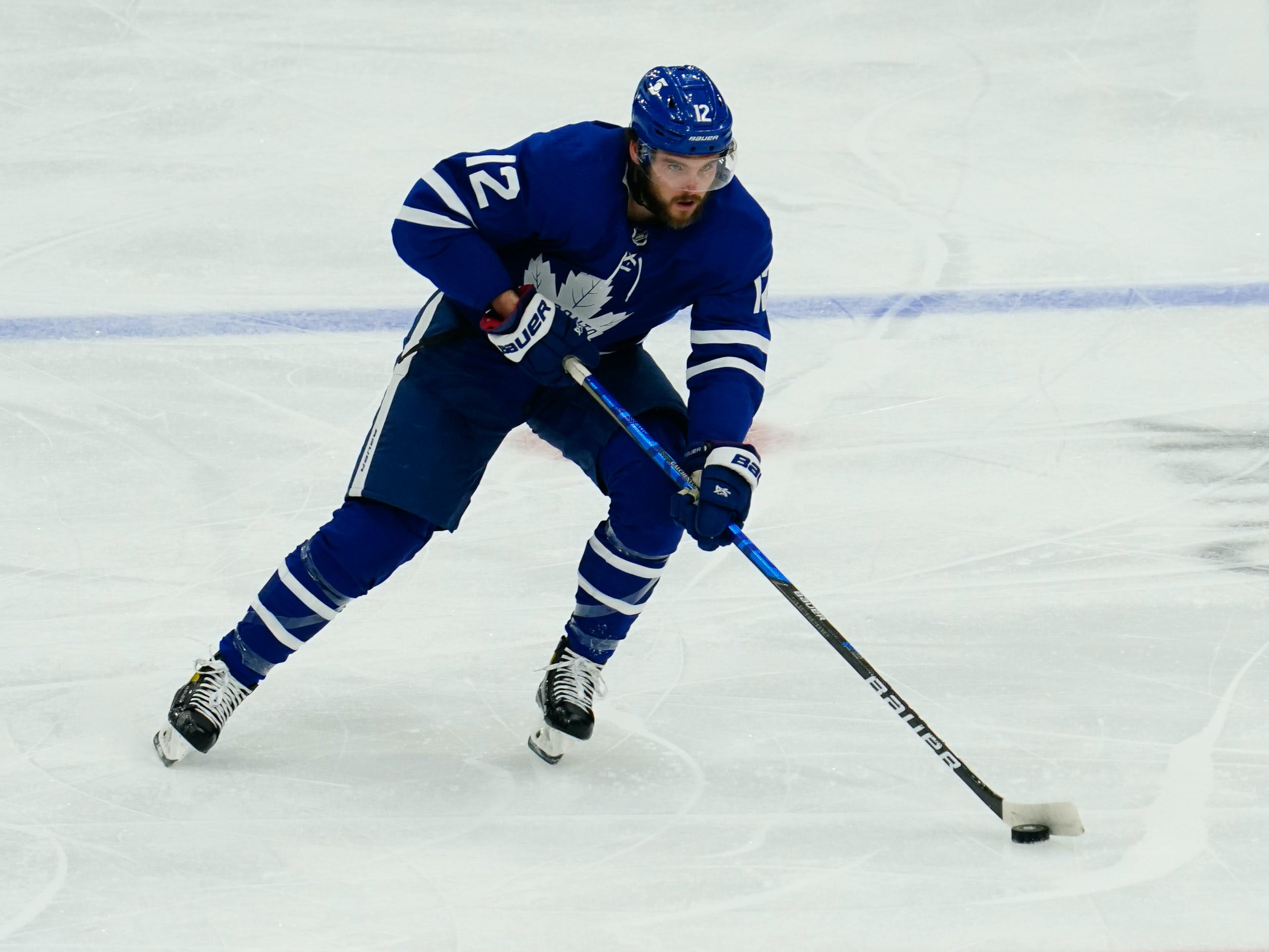 By Jori Negin-Shecter
1 year ago
The season that was for @Alex Galchenyuk had been one defined by renewed excitement. The former 3rd overall pick had already been cast aside by several teams by the time he had made his way to the Toronto Maple Leafs, yet his role in the top six had been overall very successful as @Jimmy Vesey’s midseason replacement. Galchenyuk had been contributing on the scoresheet while also doing work under the hood in more intangible ways. On May 27th, however, less than a minute into the first overtime of game 5, Galchenyuk made an errant pass that would mark the beginning of the end of Toronto’s season.
That brief moment in time in Alex Galchenyuk’s season is perhaps the greatest encapsulation of what made him both so successful and how his play carried certain drawbacks as he settled in beside the rest of the Toronto Maple Leafs elite top 6.

The Maple Leafs acquired Alex Galchenyuk last season during a mid-February stretch that saw him dealt from Ottawa to Carolina two days prior, then flipped directly to Toronto to avoid the quarantine rules that constipated the trade market this past campaign. Toronto sent over 2016 second-round pick Egor Korshikov, much to the chagrin of our Earl Schwartz, along with defenceman David Warsofsky, and sent the American winger to the Toronto Marlies to rebuild his shattered confidence.
Galchenyuk immediately got to work with the Marlies coaching staff and quickly demonstrated that he was too good for the weaker competition of the American Hockey League.
Galchenyuk had eight points in six games, including two goals, and had more importantly worked with the Maple Leafs development staff to completely rebuild his game. Perhaps most significantly, Galchenyuk worked on improving his stride, which had begun to deteriorate due to a host of knee injuries in years prior. Galchenyuk had seemingly rehabilitated his game with the Marlies and got his first shot with the big club on March 19th against the Calgary Flames following the waiving of Jimmy Vesey.
In the following two months of the regular season, Galchenyuk would play just shy of half of all his even-strength time on ice beside the dynamic duo of @William Nylander and John Tavares, per Dobber Hockey, where he would put together his best extended showing in the NHL since his days in Montreal.

Breaking Down the Numbers

The box score doesn’t quite do justice to the strength of Galchenyuk’s play, but his 12 points in 26 games, including four goals and nine primary points, were still good for a 37 points pace per 82 games. Additionally, ~9% individual and on-ice shooting percentages indicated that his scoring numbers were right in line with his career production to date, an encouraging sign of sustainability from a player with a wobbly history at best.
Galchenyuk’s per rate stats told a similarly excellent story, with the left winger ranking 7th amongst all Maple Leafs regulars in points per 60. His chemistry with the Maple Leafs top six was undeniable, and the under the hood numbers only further supported his stupendous offensive contributions as a found wallet.
Galchenyuk’s individual expected goals rate of 1.02 ixG/60 ranked ahead of other high-scoring forwards like @Mitch Marner and @Jason Spezza, while his five-on-five on-ice numbers were also strong in most categories.
Galchenyuk’s 57.43% xGF% per Evolving Hockey was good for fourth amongst all Maple Leafs forwards, behind only the elite triumvirate of Hyman-Matthews-Marner, while his 5v5 xGF/60 sat third on the team. Galchenyuk’s ability to be a positive contributor and keep up with the Maple Leafs big four, in ways that others like @Ilya Mikheyev and the departed Jimmy Vesey had failed to, gave fans a glimpse of the dazzling upside the Montreal Canadiens saw in him way back in 2012. While never tasked with driving his own line, Galchenyuk was more than steady, pitching in with the odd goal, and helping encourage high danger opportunities at a better rate than many of his Maple Leafs peers.
Unfortunately, that wasn’t the only high-event part of Galchenyuk’s game that he flashed while playing for the Maple Leafs. As was demonstrated during game five of the first round, Galchenyuk was not always the most sturdy of defensive forwards, which stood out amongst one of the strongest defensive Maple Leafs teams of the last decade. Amongst regular forwards at 5v5, Galchenyuk outclassed only Jason Spezza in xGA/60, which certainly may give General Manager Kyle Dubas some pause on retaining the 27-year-old if the Maple Leafs are trying to move towards a more structured system.

What will he cost (and what should they pay him)?

Alex Galchenyuk will be one of the youngest unrestricted free agents in the entire league next year, turning 27 a few short days prior to his acquisition by the Maple Leafs in February. Any contract given out by the Maple Leafs, or any other team for that matter, is unlikely to break the bank, but it could be interesting if the Maple Leafs chose to take a gamble on locking Galchenyuk up with some moderate term. The Maple Leafs will need to get creative to fill the gaps around the big four with a flat salary cap, and Alex Galchenyuk is precisely the type of player that makes sense to bet on as you try to fill your lineup’s holes à la Florida Panthers winger @Carter Verhaeghe last offseason.
With any multi-year extension of course comes some level of risk. What if this 26 games sample is nothing more than a flash in the pan? What if Galchenyuk returns to being a pumpkin, a shadow of his former self, and the Leafs are now stuck with a lousy unproductive winger taking up a valuable SPC spot. Sure, the risk is ultimately minimal, but you would always rather give that money to a player that can help your team rather than missing out on the latest ‘@Jonathan Marchessault’-esque breakout.
If the Maple Leafs do choose to retain Galchenyuk’s services, they would likely sign him to a similar deal that they’ve already inked fellow depth wingers Jason Spezza and Wayne Simmonds to. The only questions are if the Maple Leafs a) want Alex Galchenyuk and b) if Alex Galcheyuk wants to remain a Maple Leaf. If the two sides can find a fit, perhaps somewhere in the 2x$900k neighbourhood, it would seem to be a no-brainer for Maple Leafs management, at least as a stop-gap until younger players like Nick Robertson or Rodion Amirov are ready down the line.
The other question, as already alluded to, is if the Maple Leafs can better allocate that cap space to another forward with more impact potential. With some rumours floating around that the Maple Leafs could make a play for forwards like @Mikael Granlund or Conor Garland, the team may not want to commit any unnecessary salary to a player like Galchenyuk until other superior options have already been exhausted.
One way or another, this offseason is sure to be one of dramatic change with the apparent impending departure of Zach Hyman and other core pieces facing questions of their future with the club. Whether or not the Maple Leafs chose to allocate some of their freed-up funds on Alex Galchenyuk is just a small part of what is sure to be a fascinating summer for the Toronto Maple Leafs.
All Stats via Evolving Hockey and Hockey Reference unless otherwise noted
Uncategorized
Recent articles from Jori Negin-Shecter