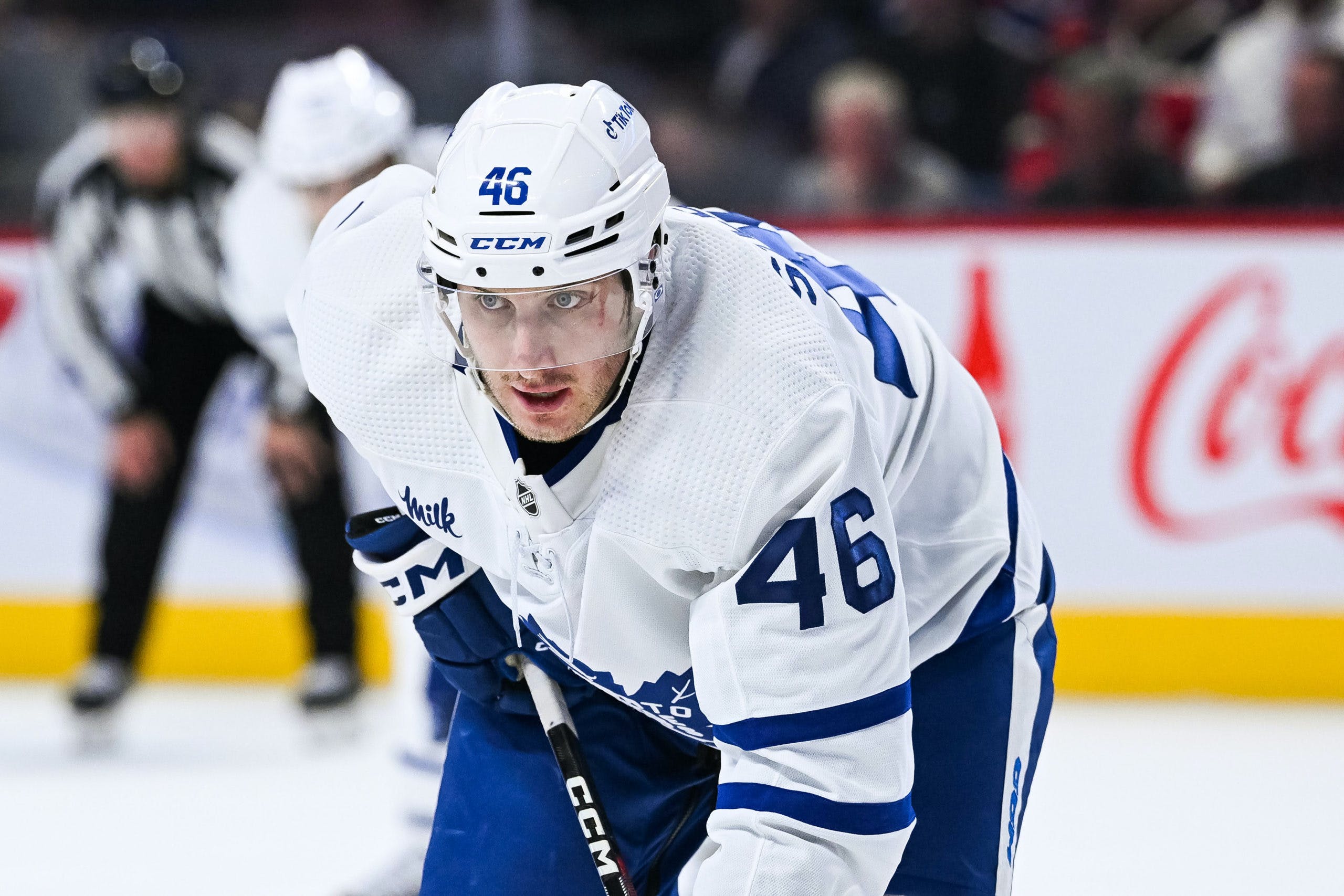 By Nick Barden
3 months ago
This was the first-ever Maple Leafs training camp for Alex Steeves, and it’s safe to say it was a glaring success.
The Maple Leafs were always going to be a tough roster to crack, especially this season, with the likes of Nick Robertson, Denis Malgin, Adam Gaudette, Zach Aston-Reese, Joey Anderson, and Pontus Holmberg all in the mix. But the 22-year-old looked like he could fill an NHL role, if needed.
Steeves got a chance throughout last season to show Toronto what he had — playing three games in early December. Although he only averaged eight minutes of ice time throughout the three games, it was still a great opportunity to show the Maple Leafs’ brass what he had.
The 22-year-old recorded his first point during that stint, while playing on the fourth line. A good omen for a player who put in a lot of work down in the AHL.
During this training camp, though, Steeves didn’t take the opportunity for granted. He impressed a lot of people, including Maple Leafs head coach Sheldon Keefe, and even stuck around for the second last round of cuts.
Steeves scored three points in the five preseason games he played. The 22-year-old averaged just over 13 minutes of ice time throughout those five games — bringing a lot to the table during key moments.
Whether it was in the offensive or defensive zone, Steeves looked incredibly engaged throughout games. His speed was one of the skills he showcased most, outskating players to the puck in multiple scenarios, even at times getting scoring chances from it.
Steeves’ speed is one of his greatest attributes. Going back to last season with the Marlies, there were a lot of instances in which he used his speed to beat players in a foot race for the puck.
And similar to the preseason, a lot of those times where he did beat his opponent turned into scoring chances. It even worked out going the other way as well.
Steeves was also very physical during the Maple Leafs’ preseason games. Not many people know this, but the 22-year-old brings a physical presence to his game, too. He’s a player that isn’t afraid to throw a hit when his team needs a spark.
Or when there’s a player who’s in the way of the puck.
The 22-year-old is the type of player who brings everything to the table; physicality, grittiness, toughness, a knack for goal-scoring, and being a solid setup man..
Steeves’ best attribute is his shot, which helped him score 23 goals in the AHL last year. The way he gets the shot off, too, allows for it to be incredibly deceptive at times. His one-timer, if improved upon, can be one of his biggest threats if he gets the chance to use it on the power play.
He didn’t get to use it much during the Maple Leafs’ preseason games, but it can be an interesting weapon in the AHL.
There should be a lot of excitement around Steeves this season. Whether it’s in the AHL or NHL, the 22-year-old is going to find a lot of ways to impact the game.
Although he didn’t make the Maple Leafs out of camp, it doesn’t mean he won’t be an intriguing call-up once the NHL regular season gets underway. If I were a betting man (which I’m not), I’d put money on him getting a call-up at some point this year.
I’d also put money on him having a good showing during that instance.
He’ll need to be put into a good position when he does get called up, though. Steeves isn’t the type of player who fares well in the bottom-half of an NHL lineup, similar to Robertson. If there’s a scenario where he’s called up, it has to be in a position where he can have success.
But for now, Steeves will be back down in the AHL with the Marlies doing what he does best; scoring and being a key contributor.
News
Recent articles from Nick Barden