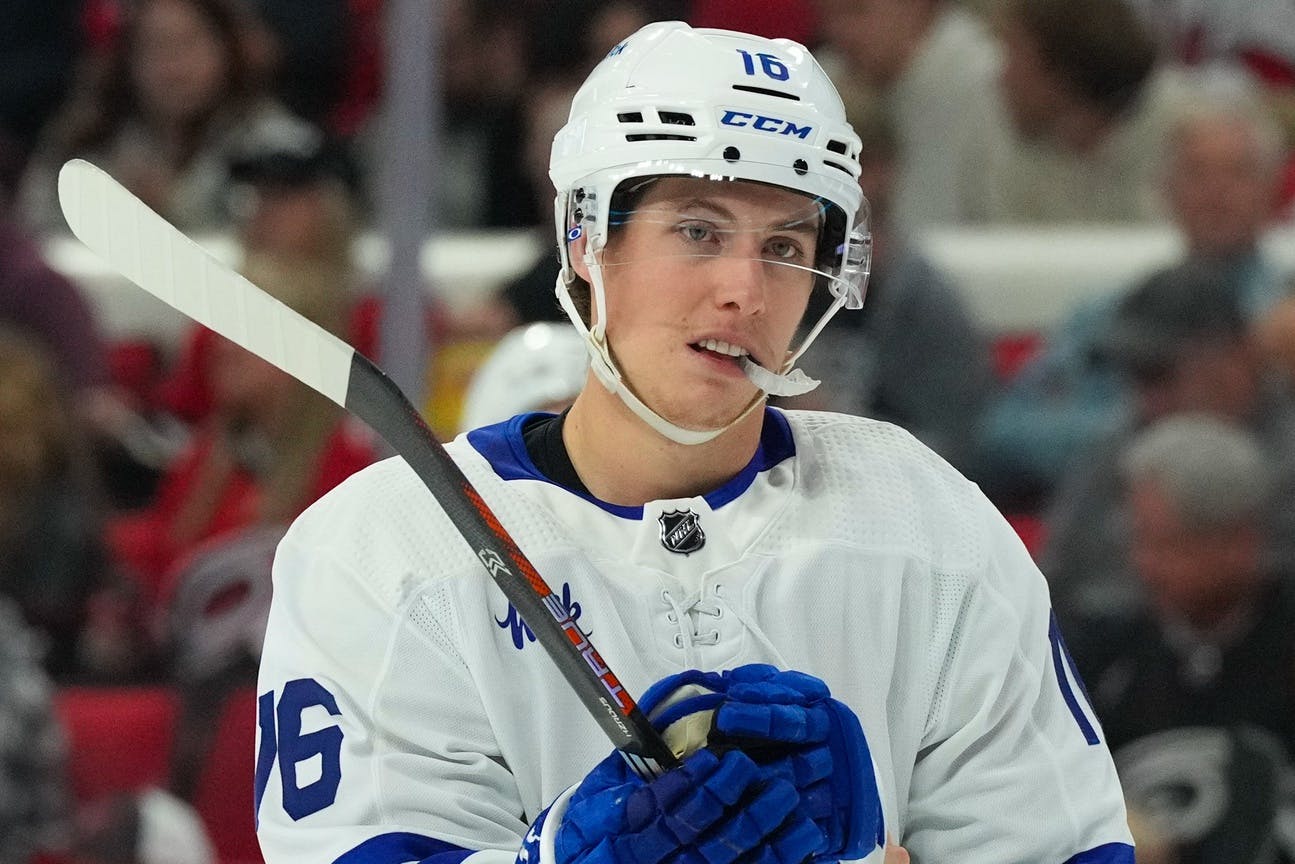 By Nick Alberga
2 months ago
If you’re the Maple Leafs (14-5-5), you have two concrete objectives tonight at home against San Jose (7-13-4): Win the game and get Mitch Marner a point.
Simple enough, right?
The 25-year-old is looking to extend his point streak to 18 games, which would tie Darryl Sittler and Eddie Olczyk for the team record.
Just like Marner, Toronto has been on complete fire all month long. After a 4-4-2 October, they’re 10-1-3 in the month of November. Additionally, they’re currently riding a four-game win streak, and a nine-game point streak (7-0-2). That’s right, they haven’t lost in regulation since the Hall of Fame Game against Pittsburgh 19 days ago. Incredible stuff.
To add some further juice to this one, the Leafs will try to avenge a 4-3 OT loss to the Sharks back on October 27th. San Jose is coming off a 4-0 win in Montreal last night.
Time: 7 PM ET (Sportsnet)
Starting Goalies:
SJS Kaapo Kahkonen- LIKELY (3-5-2, 3.43, 0.884)
@
TOR Ilya Samsonov – CONFIRMED (6-2-0, 2.23, 0.921)
Projected Lineups:

Three Storylines:
MARNER POINT STREAK
He can play it down all he wants, but there’s no question tonight’s all about Mitch Marner. And it should be. With a point, the 25-year-old can tie Darryl Sittler and Eddie Olczyk for the franchise point streak record. Incredibly, he’s notched at least one point in 17 consecutive outings tallying six goals and 23 points in that span. With that in mind, you know the puck’s going to be on Marner’s stick all night long. Rest assured, everyone knows what’s up here; I think he gets it.
WELCOME BACK, ILYA SAMSONOV
After missing 12 games with a knee injury, Samsonov will start tonight for Toronto. All in all, I don’t mind the call. At the end of the day, the Leafs will need both of their goalies if they’re going to do anything substantial this season. It’s hard to believe, but this will be just the third game this season that Toronto will have both Samsonov and Matt Murray available to them. Furthermore, I’m curious to see what this partnership could look like long-term. There’s certainly lots of potential, that’s for sure.
FINISH STRONG
As referenced, the Leafs have had a brilliant November. They’re 10-1-3 and haven’t lost in regulation in almost three weeks. On top of that, they’re coming off a sweep of their four-game road trip. That said, it’s important to finish strong and avoid a possible letdown tonight. Earlier this season, Toronto played down to its opponent quite a bit —including that loss in San Jose at the end of October. I like to think this team is past that, but you just never know. It’s a long season, you’re not going to have it every night. Bring the energy!
BETTING:
Courtesy our friends at PointsBet Canada, here’s tonight’s lines & odds:
(As of Noon EDT)
Prop Play:
Mitch Marner Over 2.5 SOG (-110)
Editorials
News
Recent articles from Nick Alberga