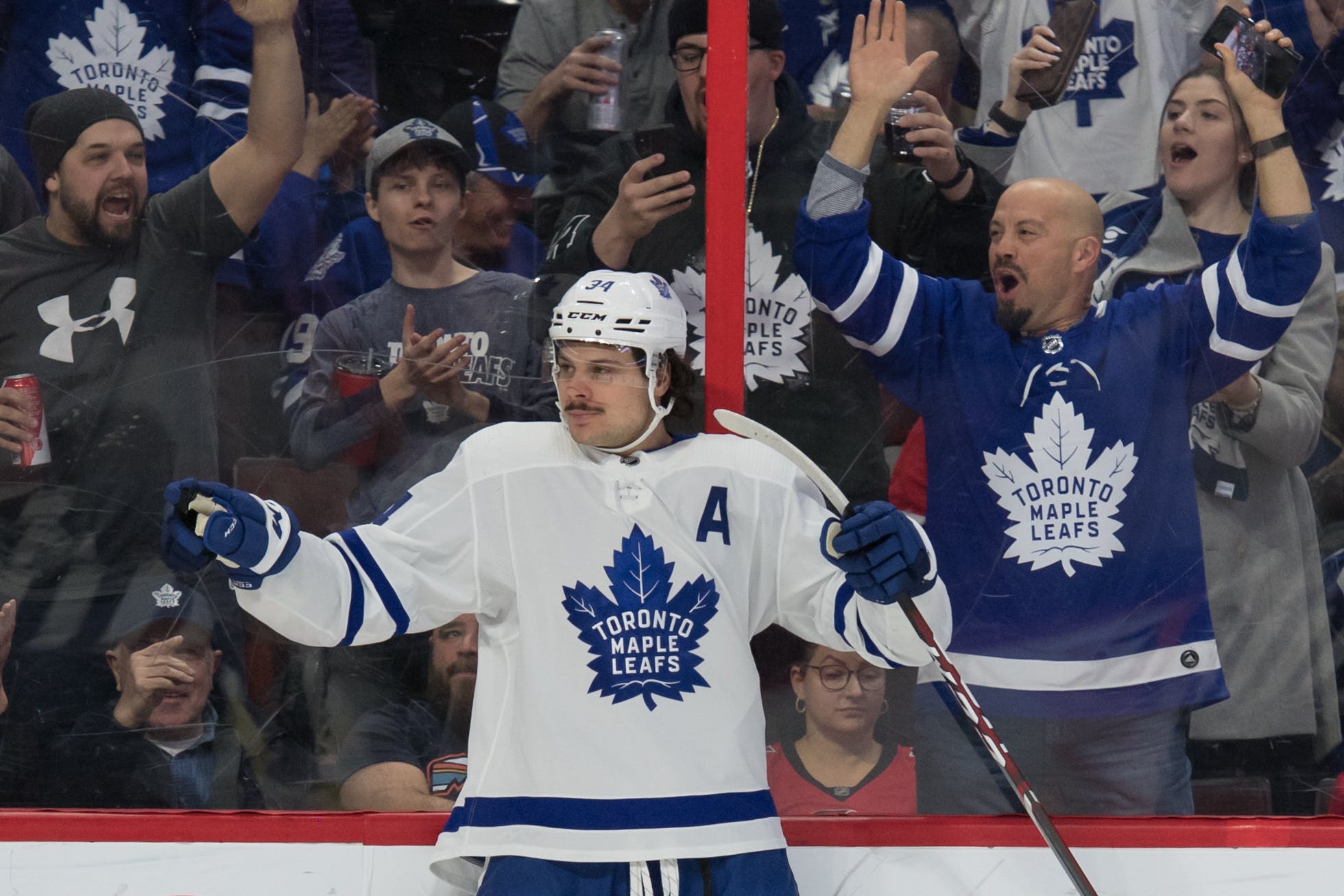 By Ryan Hobart
1 year ago
What a year this has been for Auston Matthews, eh? He has been atop the league’s goal scoring charts for the majority of the season, and has had the Rocket Richard trophy locked up for a few weeks.
But this season has been about more than just goals; Matthews has finally shed that expectation of being poor defensively that so often comes with elite, young offensive talent. In Toronto, we’ve had our fair share of goal scorers being poor defensively, so it almost feels natural to expect Matthews to be a detriment to the team in his own zone. However, this year, that narrative is changing.
Today, we’re going to look into Auston Matthews in two specific respects: goal scoring, and defensive play. One is certainly sexier than the other, but both are important for a star center to take their team to higher heights. As the Leafs attempt to reach those heights, both of these skills will be necessary for Matthews to lead this team forward.

We’ve all seen Matthews score some incredible goals in his NHL career already. Most recently, this one that made  Ben Chiarot question if playing in the NHL is worth getting embarrassed like this.
Flashy and unstoppable. But this is Staturday, so as much as these highlights are amazing to watch, that’s not what we’re here for. We’re here for stats.
Here’s one for you: Auston Matthews is 4th in career shooting percentage in the salary cap era, behind Steven Stamkos, Leon Draisaitl, and Brad Marchand. We can usually point to shooting percentage as being “luck”, but that’s over a short period. Career shooting percentage incorporates so many shots and goals that in can be pretty stable, statistically.
Another stat is that Matthews is in a league of his own when it comes to scoring goals at even strength. It’s him at 1, Ovechkin at 2, and everybody else in a dust cloud. He also leads in scoring goals in all situations, with a bit more of a steady gradient between him, Ovechkin, Stamkos, Pastrnak, Laine, Kucherov, Tarasenko, and then the rest of the field. Of course, we’re talking about goals per 60 minutes of ice time, not goals overall. And since we’re using ice time as part of the calculation, by default it only includes those players who we have time-on-ice data for, which only started being recorded officially in the 1997-98 season.
Per quanthockey.com, sorted by ESG/60:
This season has really elevated Matthews in this regard, though. Focusing in on this shortened “2020-21” NHL season (which started in 2021 but whatever), Matthews is currently on pace for 65 goals in a full 82-game season at his current scoring rate. However, he’s on a hot streak right now, and it’s an exaggeration to pretend he’ll maintain this through a full season. Instead, we can take what he’s done so far, and use his career shooting percentage and shooting rates to estimate how he’d finish an 82-game season.
With a 16.11% career shooting percentage, and career 11.46 shots-on-goal per 60 minutes of ice time, and this season’s 21:49 of time-on-ice per game, we can make some simple projections. With 46 games played, there would be 36 games left in a full season. In those games, we can estimate that Matthews would have 785:20 of ice time. That equates to 150 shots on goal, and at 16.11% shooting percentage, we get another 24 goals for Matthews. That brings him down to a still incredible 60-goal pace. Only Ovechkin and Stamkos have achieved 60 goals in a season in the salary cap era, and Matthews will have to wait his turn to actually achieve it, but it certainly seems that this year could have been the year he did it were the season not shortened by the pandemic.

Goals are a simple stat. Either the puck went in when you shot it, or it didn’t. We can play around with that using time-on-ice, filtering for just even strength, or whatever else. Quantifying and analyzing defensive play is an entirely different challenge.
We’re not alone here, though, we do have some tools that can help us out.
Firstly, we can use Evolving Wild’s Goals Above Replacement (GAR) model. This model estimates how many goals a player has added to benefit their team as compared to a replacement-level player. Of course, defensively, you don’t “add” goals, you prevent them, but by doing so you’re going to improve the team’s performance in a positive fashion, so by doing well defensively you’re adding goals above replacement.
Here’s how Matthews has grown in this regard:
As you can see, the last two seasons have seen Matthews flip from being a negative defensive impact to a positive one.
If we look at another model I really like using, the Isolated Impact visualization of the Magnus IV developed by Micah Blake McCurdy, we can see a similar change:

In this case, seeing positive numbers on the defensive side is a bad thing, because instead of looking at the effect on the teams goal differential like the GAR model does, it’s looking at the impact on either the isolated goals for or goals against of the team. So, similarly, Matthews flips from being a player who causes his team to allow more expected goals against to being one who causes his team to allow fewer, starting in the 2019-20 season.

Matthews clearly elevated his game in 2019-20. In terms of goal scoring, this was clear and obvious. When it comes to the defensive side of the game, the narrative takes time to catch up with the data. It’s only this year that Matthews is starting to receive recognition for his defensive impact. That’s what makes this season feel career-defining for Matthews. However, we here now know that it’s been for over 100 games of hockey that Matthews can be quantifiably shown to be a positive defensive player. Adding this to the fact that he’s clearly the best goal scorer in the NHL right now, you can start to build a pretty convincing Hart Trophy argument.
Uncategorized
Recent articles from Ryan Hobart