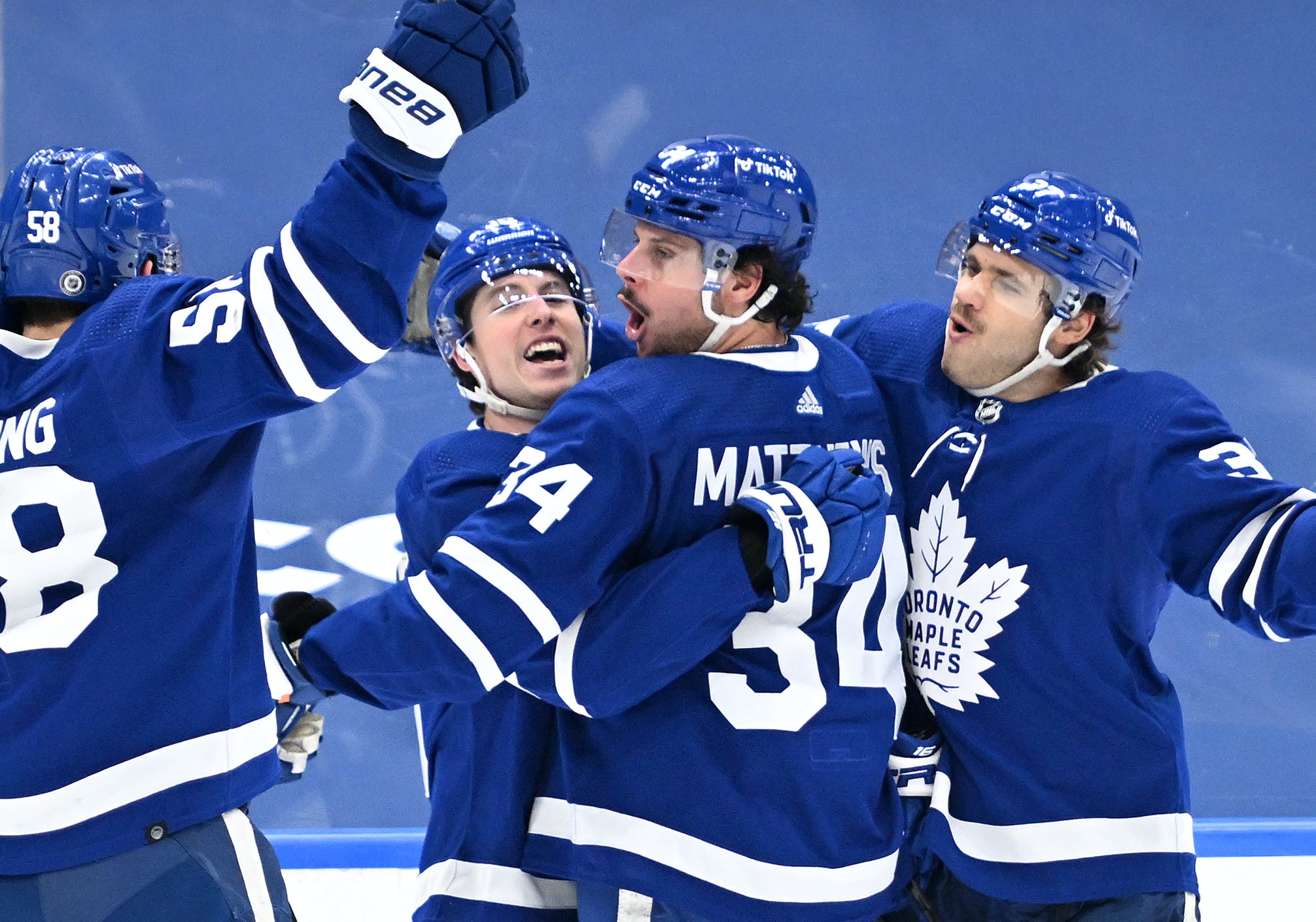 By Joseph Zita
11 months ago
The Toronto Maple Leafs were back on home ice to host the New Jersey Devils in a back-to-back, home and home tonight in Toronto and tomorrow night in New Jersey. Following their 7-4 win over the Detroit Red Wings on the weekend, the Maple Leafs were without a doubt looking for a much better start to tonight’s game after coming out of the gates very slow in the previous game. Well, that wasn’t the case and the Devils looked like the much more engaged team on the ice through the first 10 minutes of the first period.
The game opened up with a Devils goal from Pavel Zacha with a shot that just squeaked past Campbell and the rest was downhill from there. The Devils scored six minutes later from Jesper Boqvist and you could start to see that it just wasn’t going to be Campbell’s night tonight. Auston Matthews then got the Maple Leafs on the board with a shot from the high slot that beat Schmid and now they’re only down by one. However, Andreas Johnsson comes down the left-wing and rips one past Campbell and his night ended there with allowing three goals on nine shots. Although, Matthews decided to carry the team on his back and scored his second of the night and his 27th of the season to go into the intermission down by one.
The second period started pretty good for the Maple Leafs as they strung together a couple of shifts with pressure down in the Devils zone, but New Jersey eventually came down the other way and scored on Mrazek to re-gain their two-goal lead. Other than the Devils’ fourth goal, it was quite a quiet period for both teams in the second period, even with both teams getting chances on the power-play.
The third period started with the Maple Leafs on the power-play for the second time tonight after Severson got a penalty late in the second for holding Kerfoot on a partial breakaway. However, towards the end of the power-play, Spezza picked up a penalty of his own for hooking and the Devils got their second power-play right after. As the penalty ended, Spezza came out of the box, spent a little bit of time in the Devils zone and proceeded to find the back of the net with a shot that went off the bar and in. Just over halfway through the frame, Toronto scored to tie the game at four off the face-off to the right of the goalie and gave Marner and Matthews a combined six points on the night. Matthews then finished it off with an empty netter of his own to take the 6-4 win.

The third star of the game is the goalie who came in relief for Jack Campbell who was pulled in the first period for allowing three goals on nine shots, Petr Mrazek. For someone who really hasn’t played a ton this season due to injury or the fact that Campbell has been unreal for the majority of the season, it’s great to see Mrazek play some games here down the stretch towards the NHL All-Star break. He came in relief tonight and stopped 19 of 20 shots and helped hold the fort down to secure the 6-4 comeback win for the Maple Leafs over the Devils tonight. Mrazek was scheduled to start tomorrow’s game, but given what went down tonight, I think it’s safe to say Campbell will more than likely get the start tomorrow in New Jersey but according to Sheldon Keefe postgame, a decision will come tomorrow morning.

The second star of the game is Mitch Marner and it shouldn’t come as a surprise seeing him as one of the stars from tonight’s game given how well he has played ever since returning from his injury/COVID protocol list. Marner registered one goal and two assists in tonight’s game against the New Jersey Devils and has now recorded a goal in six straight games – 12 points in those contests – since returning to the lineup on January 15th against the St. Louis Blues. He set up Matthews’ first goal with a nice pass off the half wall, picked up a secondary assist on Matthews’ second goal as well which was tipped at the net from a Rielly shot near the left circle and then scored a goal of his own assisted by Matthews to extend his own goal streak to six games. Whether it’s his offensive game or his defensive game, having Marner back in the lineup lately has been a huge add for this Maple Leafs team and it’s clearly showing.

The first star of the game is none other than the man himself, Auston Matthews. After going four long games without scoring a single goal, he snapped that drought and scored three tonight – two in the first period and one in the third – to improve his goal total to 28 this year which puts him third in the league and trailing only behind Leon Draisaitl, Chris Kreider (31) and Alex Ovechkin (29). After a slow start in the first period yet again for Toronto, it was Matthews this time who helped carry the weight and put the Maple Leafs on the board with two goals of his own to trail by one after the first period. Later on, in the third period, he set up his winger Marner for his own goal tonight too and both collected point three on the night. With just under a minute to go with the goalie pulled, Matthews shot a puck from his end of the ice into the empty net and recorded his fifth career hat-trick and 400th career point en route to the win over the Devils.

Although Jack Campbell has arguably been the Toronto Maple Leafs’ MVP this season, he really hasn’t been the same for the past two weeks and has taken a decline in his play. However, it was bound to happen after starting the season with ridiculous numbers for the first month and a half and playing at a .940 SV% for a pretty long time.
Tonight, however, was probably his worst game/period this season as he allowed three goals on nine shots and just didn’t look like himself at all between the pipes. He allowed the first goal of the game just under a minute in and then allowed the second one not even six minutes later and then a fellow teammate of a lot of guys on Toronto, Johnsson scored the third as he came flying down the wing and that was the end of Campbell’s night as Mrazek came in relief.
Campbell was obviously supposed to start tonight and Mrazek was going to get tomorrow night’s game, but given how he got pulled in the first period, he’s more than likely going to start tomorrow’s game in New Jersey as tomorrow’s game is the last game for Toronto before they head into the NHL All-Star break.
Uncategorized
Recent articles from Joseph Zita