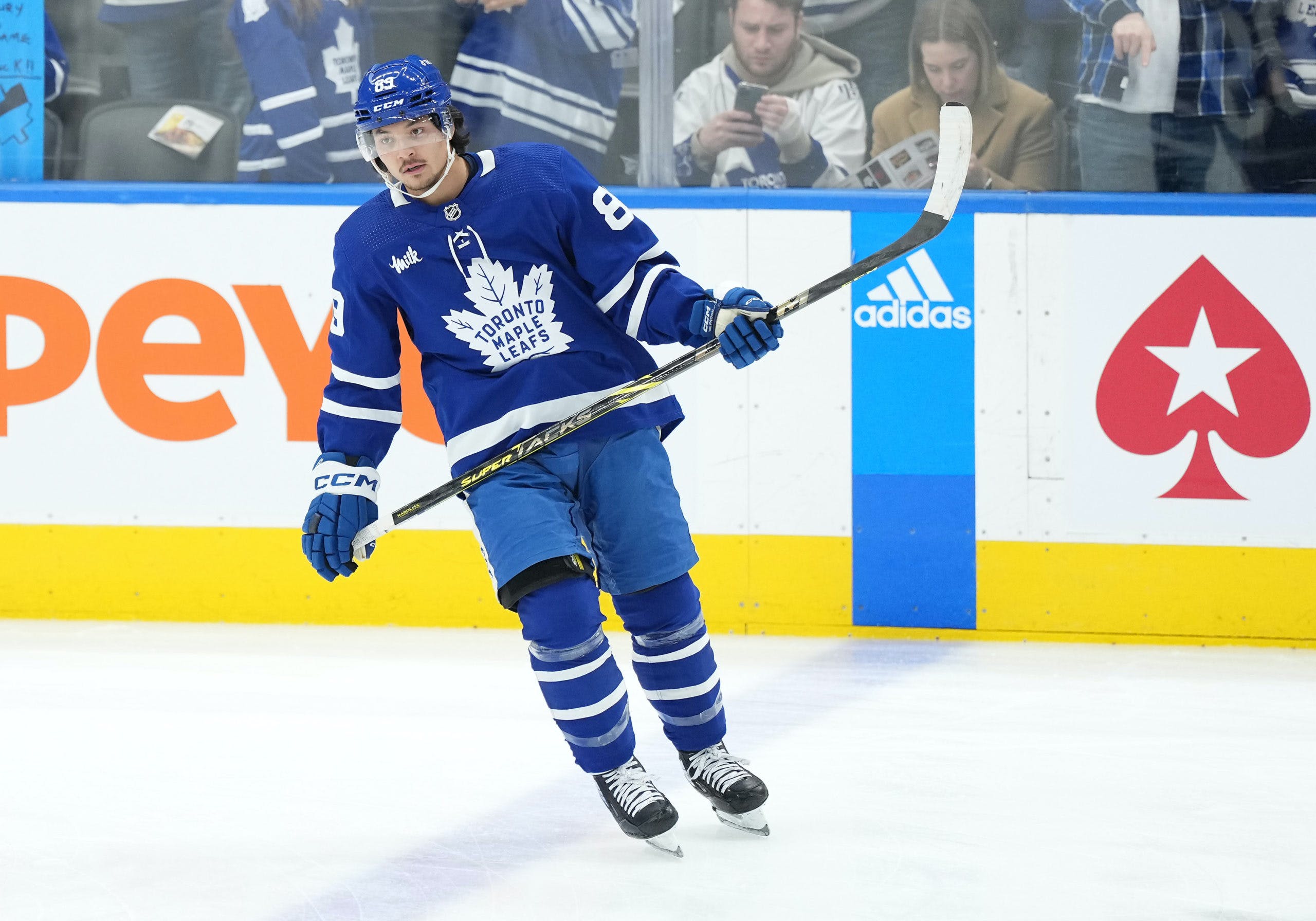 By Nick Barden
2 months ago
Nick Robertson doesn’t need to play in every game for the Maple Leafs to begin his NHL career. It’s okay if he’s scratched for a few here and there.
The hype train for the 21-year-old added a few more cars after he made a strong impression at training camp. It’s safe to say that Maple Leafs head coach Sheldon Keefe was definitely one of the new train cars waiting to see what was next from Robertson.
After not making the Maple Leafs due to cap constraints, the 21-year-old began the season down in the AHL. Not the best situation, but I’m fairly certain he understands how to handle that news by now.
This pill, though, might’ve been a little bit tougher to swallow since the 21-year-old was told he played good enough to make the team.
Robertson skated in two games with the Marlies before getting called back up to the Maple Leafs. It was a step in the right direction for him, and it provided a lot of early excitement for the fans, too.
The 21-year-old is now six games into what seems like his first full-time NHL season. Robertson has played fairly well early on, too, scoring four points throughout those six games, and looks to be gaining confidence every time he steps onto the NHL surface.
He scored two incredibly big goals for the Maple Leafs when taking on his brother, Jason Robertson, and the Dallas Stars. Robertson scored what was Toronto’s go-ahead goal before Tyler Seguin tied it. The 21-year-old, though, wasn’t done, scoring the overtime winner to give Toronto the win.
But now, 16 days after making his season debut, Robertson needs to deal with another hurdle in his professional career: being scratched for a second-straight game.
When looking at this situation from an outside point of view, it’s clear that a lot of fans are wondering why Robertson is sitting out. Four points in six games — why is he in need of a scratch?
Some believe that if you’re making him miss games, the Maple Leafs might as well send him back to the AHL where he’ll get some meaningful minutes. The 21-year-old isn’t in need of a confidence-boosting stint with the Marlies, though.
I understand that he’ll dominate the AHL and score a lot of goals, but what good is that going to do if he’s ready for NHL minutes?
This isn’t the most ideal situation for Robertson, but it’s also not the worst either. He’ll sit for Saturday night’s game against Boston — as it’s confirmed already — though I do believe he will play in the second half of the back-to-back against Carolina.
If that’s not the case come Sunday, then I might raise the concern-o-metre just a bit.
But for Robertson, the biggest part in all of this is that he remains in the NHL. Whenever the 21-year-old was down with the Marlies, he would always talk about getting to the NHL and how that was his goal.
And now that he’s finally there, it would be detrimental to his confidence for him to be sent back to the AHL. This is an NHL-calibre player we’re discussing here — that deserves to remain with the Maple Leafs.
Another AHL stint won’t help him, just like it wouldn’t help Denis Malgin if he was sent there.
I’m sure Robertson isn’t happy with the situation, but being up with the Maple Leafs will allow him to gain the experience of being a full-time NHL player for the long term, and that’s what Robertson needs.
The NHL is the right place for the 21-year-old and he should remain there for the rest of the season.
Editorials
Recent articles from Nick Barden