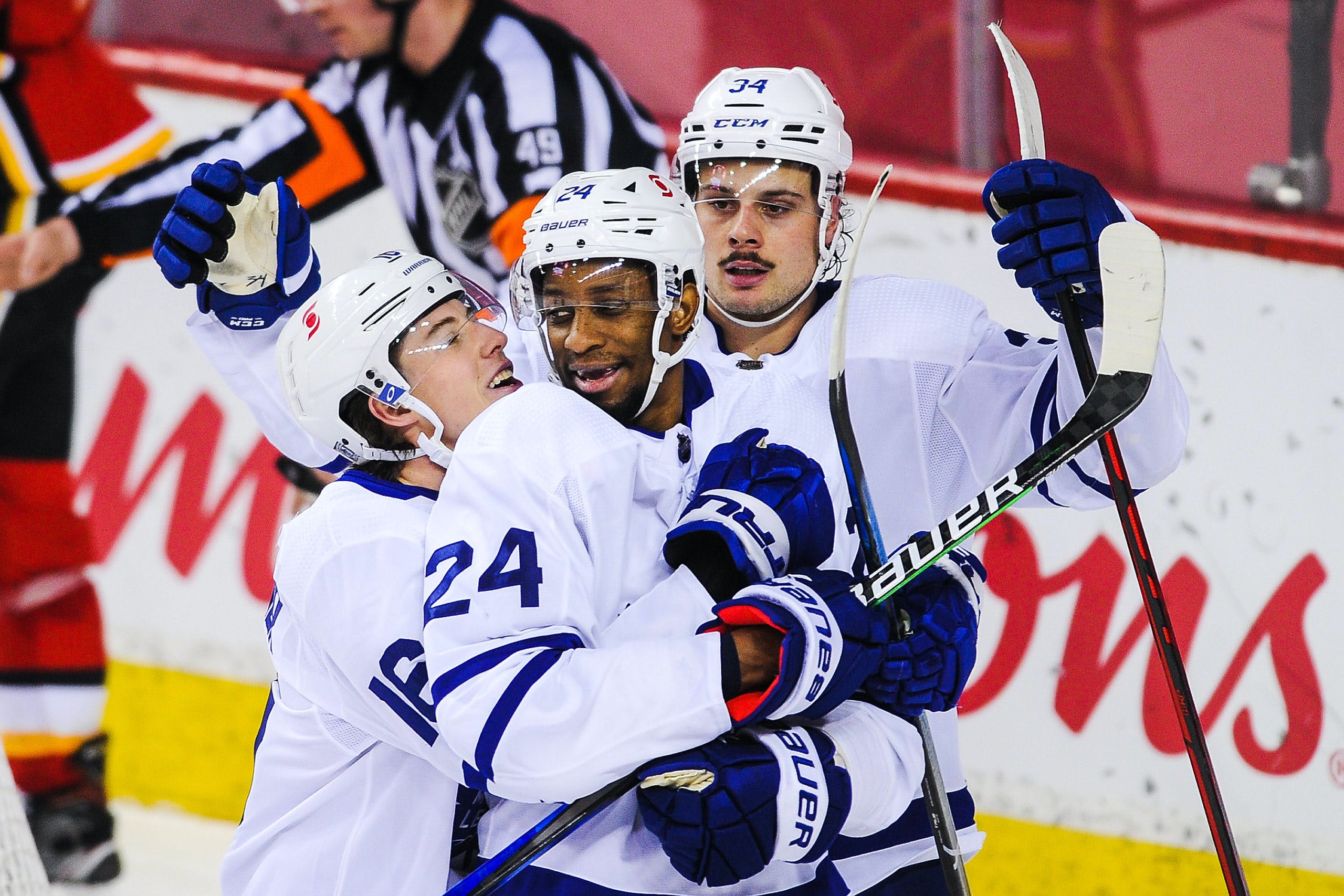 By Filipe Dimas
2 years ago
In a game full of wild bounces and messy goals, luck fell in favour of the Toronto Maple Leafs who handed the Calgary Flames their first regulation loss of the season in a 3-2 win. Jake Muzzin opened up the scoring seven minutes into the first period with a shot from the blue line that deflected off a Calgary skate before sneaking past Jacob Markstrom.
Sean Monahan tied the game halfway through the second period with a scramble in front of the net where he was left free to shovel a rebound past Jack Campbell who had been playing steady in net all night while giving Frederik Andersen a needed night off during this condensed schedule. The tie wouldn’t last too long as Wayne Simmonds scored his milestone-filled first goal as a Maple Leaf, 500th career point, and 100th career playoff goal with only 32 seconds left in the period. It was yet another ugly goal in a game that was becoming full of them, but as the broadcast suggested, no one asks how you got them, just how many you’ve got.
Auston Matthews continued the nasty goal theme less than three minutes into the third period to put the Leafs up by two and scratch the Calgary Flames off as the last NHL team that Matthews hadn’t scored again. It was maybe the luckiest goal of them all with a Rielly shot from the boards that bounced first off Matthews’ skate, then off Rasmus Andersson’s, and finally into the Calgary net.
A few minutes later, Elias Lindholm would bring the Flames back within one with a powerplay goal that Campbell couldn’t see through the screen Tkachuk set up in front. Nevertheless, the Leafs would hold on for the remainder of the game to claim their fifth win in seven games and now find themselves tied for the NHL lead with 10 points early in the season.
Most Valuable Leaf: Jack Campbell
In two starts so far this season, Jack Campbell has done what many backups have failed to do and given the Leafs some confidence in net and the ability to give Freddie Andersen a few nights off. He looked stellar all game and can’t be blamed for either of the goals scored against him, each one happening as a result as the defence’s inability to clear out Calgary players from in tight. There was a bit of a scare late in the game as Campbell seemed to be favouring his leg and struggled to put weight on it yet was able to recover during a well-called timeout and continued to look solid through the rest of the game. During the postgame, Campbell said he never considered leaving the game and was feeling great following the victory.
Least Valuable Leaf: Auston Matthews
Despite the goal, Matthews didn’t quite look like himself all night long. The Leafs were out-shot, out-chanced, and out-scored while he was on the ice and his failure to mark Monahan in the second period led directly to the Flames’ first goal. There’s a good chance that he hasn’t fully recovered from whatever caused him to miss the last game against the Oilers and may need a few more rest days before the Leafs play next.
Tweet of the night
Let’s agree not to let any more Tkachuk brothers crash into our goalie okay?
What’s next?
Round two of the Leafs and Flames takes place Tuesday night starting at 9pm. There will be a few question marks leading up to that matchup, namely about whether Matthews and Campbell return to full health, and whether the later start time will leave the Calgary arena staff more time to clean the ice and prevent another wild game of bouncy bumperpuck.
Uncategorized
Recent articles from Filipe Dimas