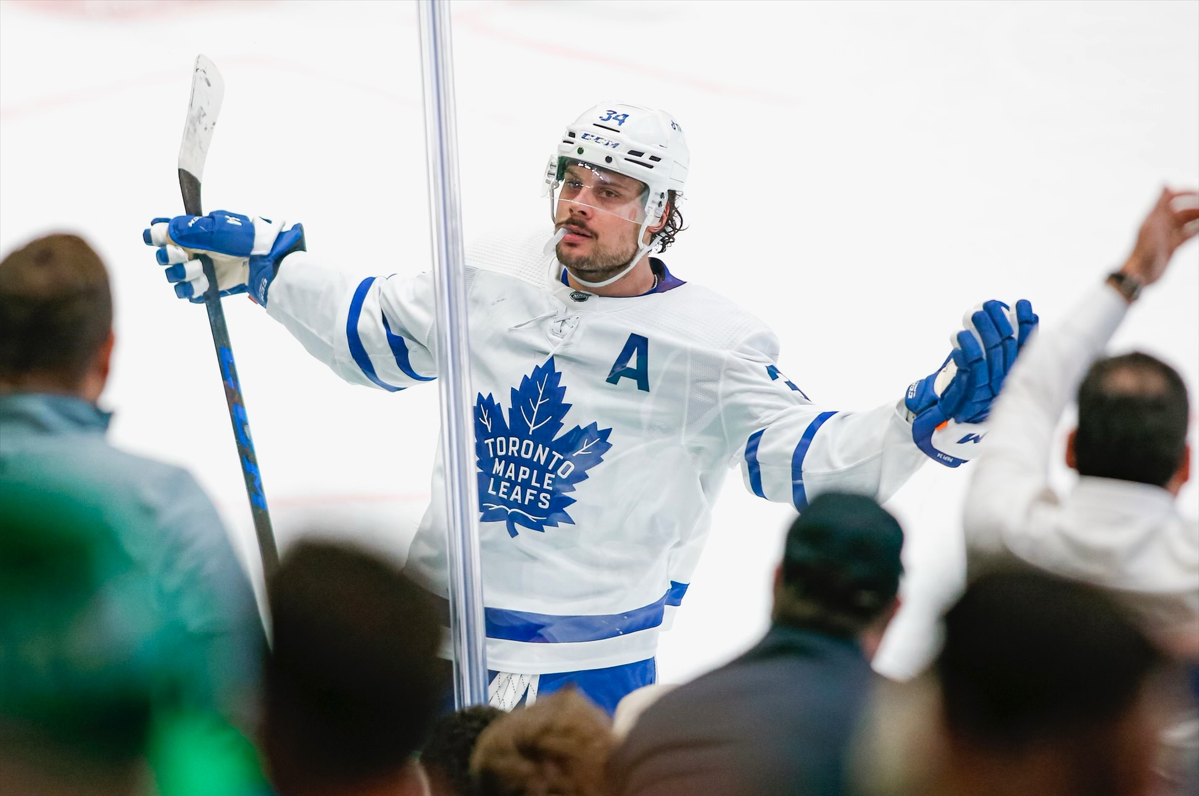 By Nick Barden
7 months ago
“I wish there was a way to know you’re in the good old days before you’ve left them.” -Andy Bernard, The Office
When Auston Matthews entered the 2021-22 season, many could feel that something special was about to happen. A full 82-game season ahead of him meant anything is possible, really.
I think there was always optimism that the 24-year-old would break the Maple Leafs’ goal record in a single-season, but you really can’t feel that energy until he’s close. As he approached the record, the hype around it became larger and larger. When Matthews finally did it, he blew by the record, scoring three goals in the next two periods (one in overtime vs. Dallas and two in the first period vs. Montreal).
He scores goals like it’s nobodies business.
That’s why I referenced the quote at the beginning of this article. We are witnessing history in the making and when that happens, some get caught up in it all (including myself) and don’t take in what’s really going on.
Make sure at some point throughout this historic season for both Matthews and the Maple Leafs to take a step back, look around, and just appreciate the greatness that we’re watching because this era will end as fast as it began.
Being mindful is what my therapist would call it.
Before I dive into what you came here for, I just wanted to add one statistic from Matthews’ season so far. The 24-year-old leads the NHL in even-strength goals with 43 and the next player behind him is Connor McDavid, who has 33.
In fact, there’s only three other players who have more goals (in all situations) this season than Matthews’ 43 even-strength goals — Leon Draistaitl (50), Chris Kreider (49), and Alex Ovechkin (45). That’s nutty.
But now, let’s talk about Matthews’ five best goals from this season.

11th goal of the season vs. Colorado

Of all the goals he’s scored this season, this one might just be my favourite. Or at least one of them.
The patience Matthews has on this play — to stick handle in front of the net for nearly two seconds before putting it into net — is just ridiculous. Like most of the goals, though, you have to credit Mitch Marner for just an incredible pass in front to Matthews.
After stickhandling, he’s able to put it over the glove of Jonas Johansson on such a tight angle, which makes for one of his best goals this year.
Filthy.

38th goal of the season vs. Vancouver

You might look at this goal and think there’s nothing spectacular about it. Brock Boeser makes an attempt to clear the puck out but he unfortunately puts on Matthews’ stick and the 24-year-old beats Thatcher Demko.
But looking at all of his goals this season, I think this one ranks at the top for one of the hardest. I don’t believe many humans on this planet could score a goal like this.
Here’s why:
Matthews is 30-40 feet away from the net on this play and if you watch closely, he’s also skating backwards. To have the strength and just the overall sheer ability to get this shot off and have it be as hard as it is, it’s just incredible. You can’t forget, too, that this shot is also placed perfectly over the shoulder of Demko. Ridiculous.
At this point, the 24-year-old is just picking corners on every goaltender in the NHL.
15/10 from me.

46th goal of the season vs. Nashville

This is another one where Matthews’ patience comes to the forefront.
His first shot is saved by Juuse Saros, but the 24-year-old comes back for the rebound that he picks up below the goal line (!!!) and somehow finds a way to pull it back and tuck it in.
Weird analogy, but it’s sort of like a Great White Shark who misses his prey once, but comes back in for the second time and makes no mistake. Matthews scores so many goals that if he misses one shot, you could put money on the next one going in.
That’s right, Matthews is now a Great White Shark.

52nd goal of the season vs. Tampa Bay

There has to come a point where I just break down his regular shot, right? I laughed at myself when I called this a “regular shot,” but hopefully you know what I mean.
I was speaking with Todd Crocker the other day. He does play-by-play for the Toronto Marlies and he actually got to call one of Matthews goals back in February of 2019. He said that you can’t really appreciate how good the 24-year-old’s shot is until you witness it live. And he’s right.
This goal, in particular, against the Lightning is just his ordinary shot that beats goaltenders all the time. The reason why this one is special, in my opinion, is because he does it against the NHL’s best goaltender, Andrei Vasilevskiy.
Again, he’s just picking corners at this point, which is remarkable.

55th goal of the season vs. Dallas

The record breaker is the final goal I’ll include in this article because of a few things.
First is the call. I don’t think there’s any more deserving person than Harnarayan Singh to call this historic goal. I like it because Singh makes it sound different than any other commentator with his “Auston Matthewssssssssssssssss” jingle at the end.
It was great.
Second is the shot itself. Matthews scores this while going down to one knee and it’s just a hell of a shot from a bad angle. This goal was enjoyable because Toronto had two power plays before this one and each player was trying to find Matthews and he just kept getting denied by Scott Wedgewood.
Third and lastly, the moment itself. This goal is as historic as ever in the Maple Leafs organization and it deserves to be watched over and over again for a long time.
I did want to mention that I had an honourable mention for this article, and it was the goal he scored later in the game during overtime.
Another highlight-reel goal.
This was only five of his 58 goals this season, and really, every goal is spectacular. There’s not one goal, whether it’s a tip-in or a shot that doesn’t make you say “wow”.
Each goal is worth watching three or four times over.
Like I said earlier, though, this is a historic time throughout the history of hockey. We are all, including the fans of other NHL teams, incredibly lucky to watch Matthews score the goals he’s scoring.
There’s not one better goal-scorer in the NHL right now than him. So remember to stay mindful and try and take in every goal that he scores.
Because, again, this will all be gone as quickly as it began.
More from TheLeafsNation.com
POINTSBET IS LIVE IN ONTARIO