Breaking down the Maple Leafs lineup changes for Game 3 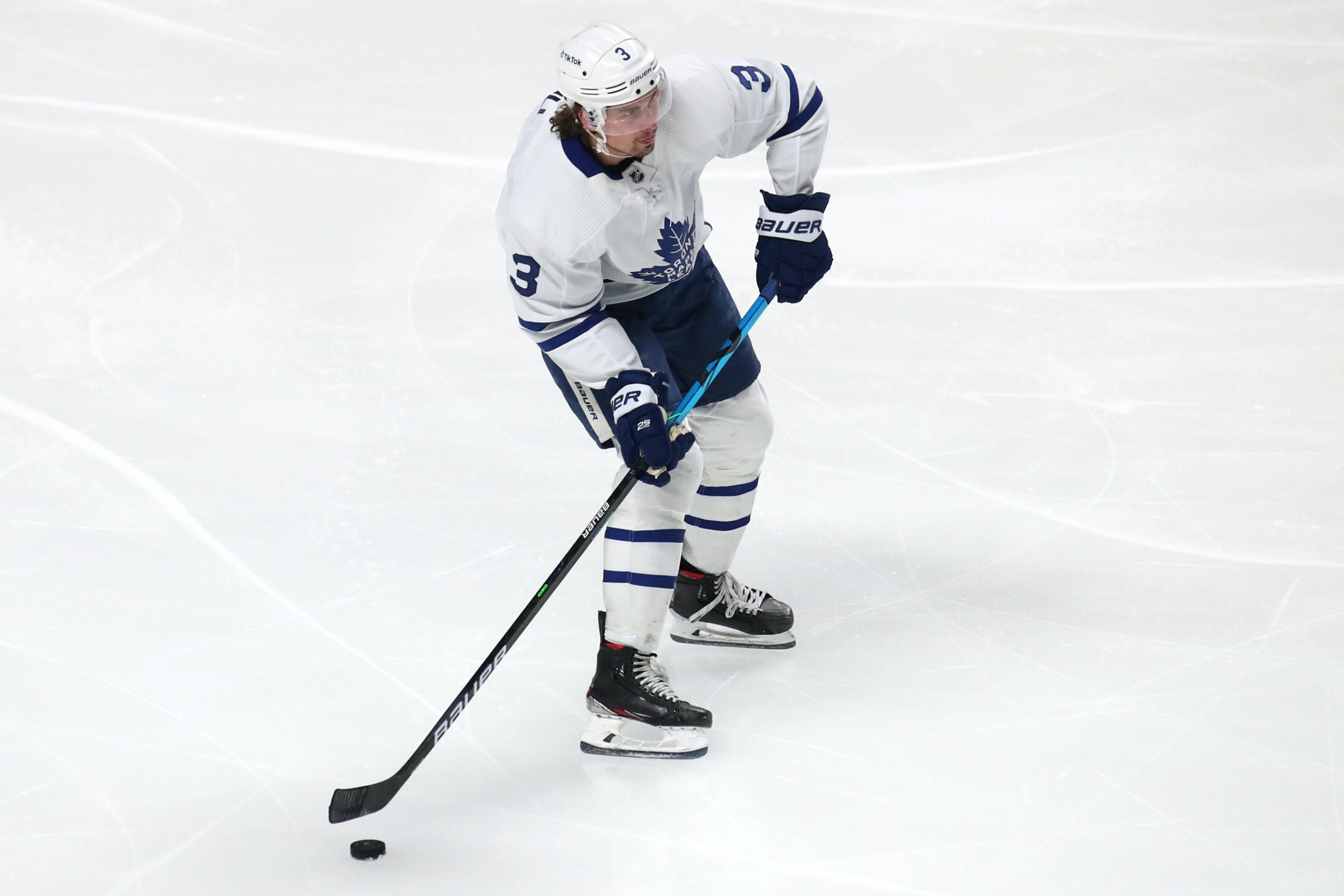 By Kyle Cushman
8 months ago
The lineup blender is officially out for Sheldon Keefe and the Toronto Maple Leafs as the series shifts to Tampa Bay. Out of the lineup are @Wayne Simmonds and @Timothy Liljegren. In comes @Jason Spezza and @Justin Holl.
While the moves are polarizing given the players coming out versus the players coming into the lineup, the numbers through two games indicate this is the right decision from Toronto to shake things up, go for a different look, and try to fix some of the things that went wrong in Game 2.

Beginning at forward, the top line of @Michael Bunting, @Auston Matthews, and @Mitch Marner is the only line that remains from Game 2 to no surprise. That trio was dynamite all season long and splitting them up, especially after a strong Game 2, would be shortsighted. Keep an eye on the matchups they face going to Tampa Bay, though, as they saw much more time against @Victor Hedman and @Erik Cernak in Game 2. Keefe will be looking to get them as many minutes against the other two pairs as possible.
That brings us to the first big change as @William Nylander and @John Tavares are re-united on the second line. While splitting the two ideally meant a deeper lineup offensively, that wasn’t quite translating to results through two games of the series. Tavares had an especially quiet Game 2 at 5v5, so getting the two back together in an effort to create more offence at 5v5 makes a lot of sense.

It appears @Ondrej Kase will join them on the second line, a trio that we didn’t see much in the regular season. Nylander-Tavares-Kase only played 34:33 5v5 minutes together in the regular season, posting good shot share results at 54.2 per cent Corsi-for but failing to create quality chances at 41.3 per cent expected goals-for. Keep in mind that is an extremely small sample, so I’m very interested to see how this performs and if we see other skaters rotate in on that second line at all.
On the third line, @Ilya Mikheyev and @Alexander Kerfoot move from John Tavares’ wing to @David Kampf’s wing. I’m expecting big things out of this line as the Mikheyev-Kampf duo was strong all season, while Kerfoot has looked fantastic through two games in this series.
In the regular season, Mikheyev-Kampf-Kerfoot was used much fewer than the iterations of the Mikheyev-Kampf line with Ondrej Kase and @Pierre Engvall. In just 29:55 5v5 TOI together, the line was sub-50 per cent in Corsi-for but limited dangerous chances against for a 55.6 per cent expected goals share.
Finally, at forward, Jason Spezza draws in alongside a much different look fourth line alongside @Colin Blackwell and Pierre Engvall. After Game 1 in which the Leafs essentially didn’t have a fourth line due to @Kyle Clifford’s ejection and Game 2 where the fourth line was caved in after a decent start, this Engvall-Blackwell-Spezza fourth line inspires some confidence.
This is a combination that has not been used at all in any notable about of minutes, but that’s less of the point. Colin Blackwell’s best results on the fourth line have come when playing with Jason Spezza, above 50 per cent in Corsi and expected goals in the regular season with Spezza versus sub-40 per cent results with Wayne Simmonds and Kyle Clifford. Adding Pierre Engvall to those already positive results, Toronto’s surprising leader in 5v5 time-on-ice among forwards through two games should only add to the line’s effectiveness.
Toronto wasn’t beating Tampa’s fourth line of @Pierre-Edouard Bellemare, @Pat Maroon, and @Corey Perry at their own game. With Blackwell and Engvall’s speed on the fourth line combined with Spezza’s craftiness offensively, this is a matchup Toronto may be able to swing in their favour with the new look line combinations.

Unlike the forward group, there is just one change on defence for the Maple Leafs. A straight swap of Justin Holl for Timothy Liljegren on the third pairing.
@Morgan Rielly and @Ilya Lyubushkin have been fine at 5v5, slightly below 50 per cent in Corsi and expected goals while playing heavy defensive starts. With Wayne Simmonds coming out of the lineup, it would’ve been quite surprising to see Lyubushkin come out as well as Toronto looks to keep some physical presence in as the series shifts to Tampa Bay.
The second pair of @Jake Muzzin and T.J. Brodie has been fantastic as well. Nearly at 60 per cent in shot share and above 70 per cent in expected goals, they’ve maintained their excellent play from the regular season into this series. They’ve been the pairing that has had the most offensive zone starts, but have easily been Toronto’s most effective defence pairing in this series so far.
That brings us to the big change on defence. @Mark Giordano and Timothy Liljegren were great in the regular season, but unlike the Muzzin-Brodie pairing, the results haven’t translated to the postseason. Through two games, Giordano-Liljegren came in at an abysmal 42.2 per cent Corsi-for and 38.3 per cent expected goals share. Keeping in mind their more defensive usage, that still is nowhere near good enough.
With Justin Holl waiting in the press box, the time is now to make the change for Sheldon Keefe. For all the flack Holl has received this season, he was much improved from his early-season struggles later in the year. The Muzzin-Holl pairing that was so strong in 2020/21 just didn’t work in 2021/22, but that doesn’t mean Holl was a liability regardless of who he played with.
In 45:57 TOI with Giordano in the regular season, Holl posted a 52.4 per cent Corsi-for and a 54.1 per cent expected goals share. While those aren’t results that would get Holl in for Liljegren if the Giordano-Liljegren pairing were as strong as they were in the regular season, it was an option for Keefe if the pairing wasn’t working in the playoffs, as has played out.
Another significant factor in getting Justin Holl back in the lineup was Toronto’s subpar penalty kill in Game 2. At 5v5 the final score was 2-2. Tampa’s improved powerplay scored three times on the Leafs and was the ultimate difference in the Lightning taking Game 2.
Justin Holl was Toronto’s third most used player on the penalty kill this season both in overall time on ice and in shorthanded TOI per game. As good as Muzzin-Brodie were at 5v5, they were on-ice for all three powerplay goals against. A returning Holl in the lineup for Toronto allows them to go back to their most commonly used penalty kill pairings of Muzzin-Holl and Rielly-Brodie.
For context, despite only appearing in 38 games together, Muzzin-Holl was still the most commonly used penalty kill pairing for the Leafs at 82:58 shorthanded TOI. Rielly-Brodie clocked in at 71:27 SH TOI in all 82 games.
After a strong showing in Game 1, Game 2 saw the Leafs falter in a couple of areas. As the series shifts to Tampa Bay, Sheldon Keefe is looking to remedy those with significant changes to the lineup. It’s his first big shakeup of the postseason ahead of a massive Game 3. We’ll see how it plays out in a matter of hours.
More from TheLeafsNation.com
POINTSBET IS LIVE IN ONTARIO

PointsBet Canada has officially launched in Ontario! Get a $25 free bet just for signing up right here!
Content
Recent articles from Kyle Cushman