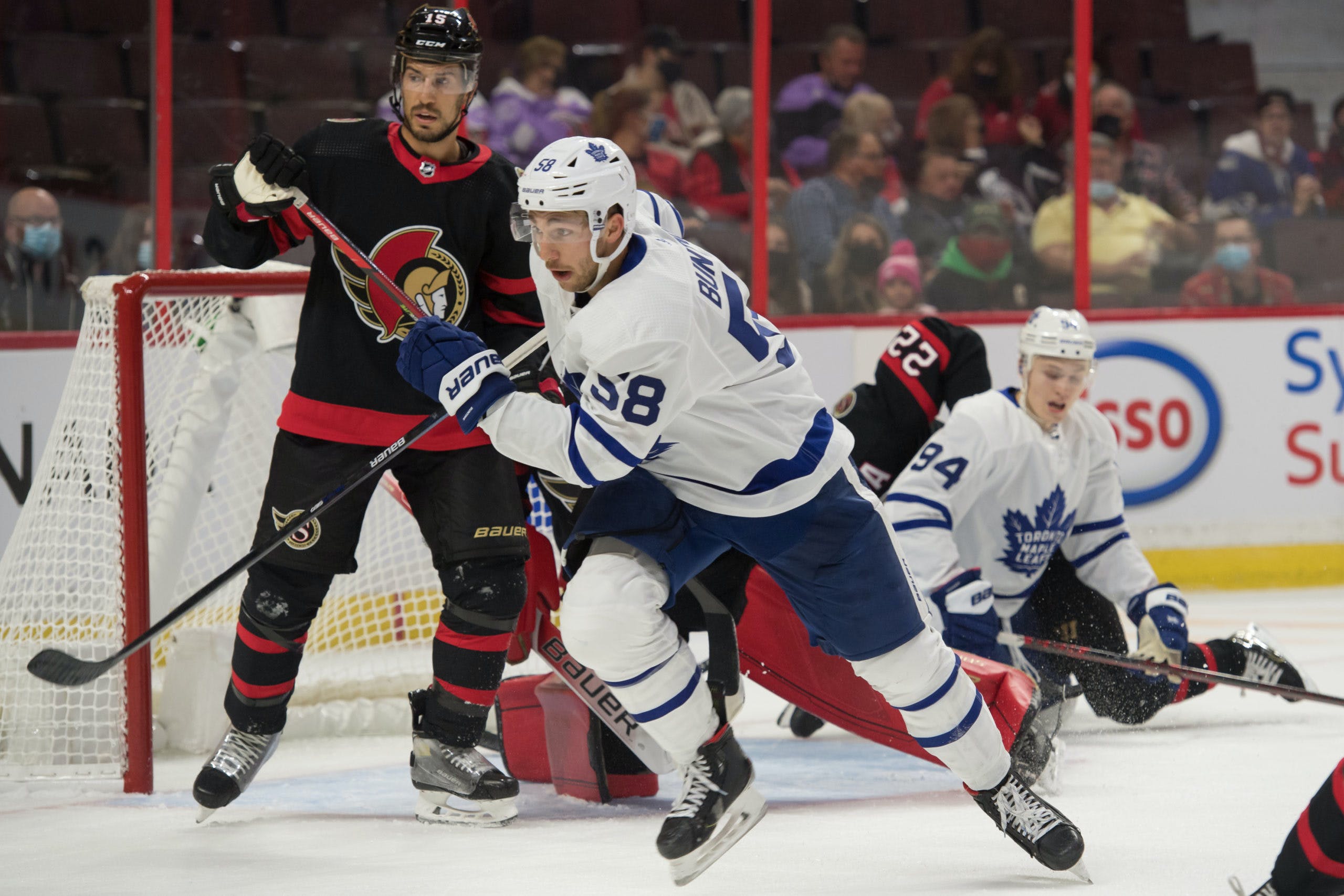 By Joseph Zita
1 year ago
The Toronto Maple Leafs resumed action with a trip to Ottawa to play the Senators in a good old fashion preseason “Battle of Ontario”. However, tonight we did not see the majority of the players that are going to be regulars in the Maple Leafs lineup because Sheldon Keefe wanted to give some AHL players and some players who are fighting for spots a look tonight, and I guess a rest day for the big boys.
Although the Maple Leafs did look good tonight, they also continued with the bad habit of taking a handful of penalties as they took five on the night. Now, their penalty kill did look good at times tonight. They were aggressive yet again which we’ll be seeing a lot more often this coming season from them. They went 5/5 on the penalty kill and since we’re talking about the penalty kill, let’s talk about the other special team, the power-play.
The Maple Leafs had six opportunities on the power-play tonight, yes six, and they went 3/6 with capitalizing on the second, third, and sixth opportunities. They really didn’t set anything up on their first power-play and pretty much the majority of their second power-play, however, as the power-plays kept coming, they got slowly better and better as they moved the puck around nicely on some of their goals.
In the end, the Toronto Maple Leafs pulled out a pretty impressive 4-0 win on the road in Ottawa with a lineup that was missing at least 10 regulars from it.

Noted sniper, David Kampf has scored yet again, this time not off a goalie misplay in front of his own net, but a nice little shot from the slot that brought the Maple Leafs up 1-0 in the game. Throughout his first couple of preseason games, Kampf has shown that he could be a nice addition to this lineup when the season starts up. He’s someone that won’t score a ton of goals, however, he does have two goals in two games already, but that’s not the point. He’s someone that is more of a defensive player and is someone that is aggressive on the puck and we’ve seen that already so far, both in the first game against Montreal and tonight against Ottawa. He’s looked good on a line with Ondrej Kase too, who also has looked good throughout the preseason so far and it would be nice to see these two on a line together come opening night.

For someone that is on a PTO with the team, Ho-Sang has looked great so far throughout his preseason with the Maple Leafs. He’s looked like someone who is working their tail off to fight for a spot in this lineup come opening night, and so far he has done a good job. I just don’t know if he will make the lineup in the end, but we’ll have to wait and see, of course. Tonight, Ho-Sang registered three assists and all three were off of Michael Bunting’s three power-play goals. Safe to say both players looked good tonight on a line together and obviously on the power-play too.
Here’s a quote from Ho-Sang postgame tonight from Kristen Shilton on Twitter.

Wow, just wow. What a start to the preseason for Michael Bunting. After scoring a goal in his first game this preseason, he follows it up and scores a hat-trick against Ottawa and he seems to be a player that will look pretty good in the top-six if you ask me. He plays a similar style to Zach Hyman and I think he can truly benefit from it if he plays with either Matthews and Marner or Tavares and Nylander. Tonight, all of his goals were on the power-play, so I think we should be calling him a power-play specialist for this coming season. All jokes aside, Bunting has impressed me a lot so far, and I’m sure he has impressed a lot of you as well with his play. It’s going to be fun watching him play a lot more this season.

Although Nikita Gusev did register an assist tonight on the Maple Leafs first goal, he really hasn’t been noticeable for an extended period of time in either of the two preseason games he has played in so far. It’s truly a bummer because when he signed the PTO with Toronto, I was thinking with the talent on this roster, he could probably have a bounce-back season and play like or at least play at a similar level to his first year with the New Jersey Devils. It seems like he has the tools to bounce back and be the same Gusev we saw during the 2019-20 season, but so far in training camp, it just hasn’t seemed like that. However, he can definitely find a spark and play great down the stretch of training camp with Toronto, but out of the two PTO’s signed by Toronto in Gusev and Ho-Sang, it’s looking like Ho-Sang has a better shot at making the team compared to Gusev right now.
At least Gusev scored in the shootout after the game though. 🙂
The Maple Leafs are not back in action for a while as their next preseason game isn’t until next Monday on October 4th where they take on the Senators, yet again in Ottawa. However, there is the Team Blue vs Team White intrasquad game on Friday night which is being televised as well, if you wish to tune into that.
Although by the next game, we might see some cuts to the roster given there will be three preseason games remaining on the Maple Leafs schedule and the coaching staff may want the remaining games to be with the majority of the guys that will be making the team come opening night on October 13th against the Montreal Canadiens so they truly know what they are working with.
Uncategorized
Recent articles from Joseph Zita