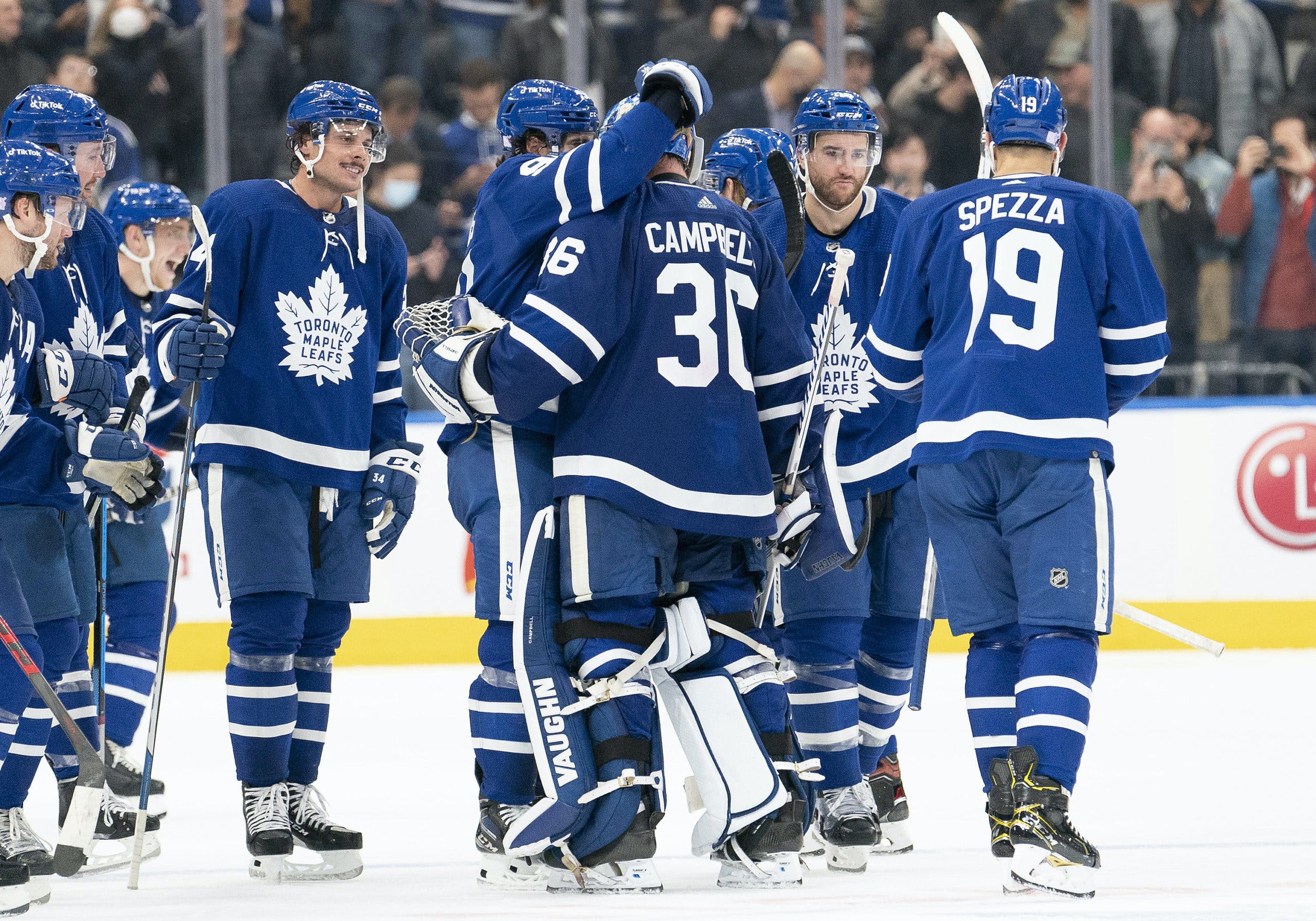 By Joseph Zita
1 year ago
The Toronto Maple Leafs welcomed the Tampa Bay Lightning into town just less than two days after they displayed arguably their best game of the regular season so far. After taking care of business and picking up an impressive 4-0 win over a depleted Vegas team, the Maple Leafs had to shift their focus to the reigning back-to-back Stanley Cup champions who were coming into town for Thursday night’s tilt.
The Maple Leafs didn’t have the same start that they had against Vegas, and Tampa Bay applied early pressure and had a couple of odd-man rushes as well. They ended up scoring the first goal of the game just a bit over midway through the first, but that wasn’t the biggest thing that happened that period. Sergachev hit Marner with an illegal check to the head towards the end of the first period and with that play, he should get disciplined by the league without a doubt.
The second period was a much better period for the Maple Leafs as they controlled pretty much the entire period 20 minutes and held the Lightning to 0 shots for about over 10 minutes. However, the period ended how it began, 1-0 for Tampa, despite some quality chances for Toronto. The third period was more so of the same. Toronto controlled a good amount of the third period but the Lightning then found life and started to apply pressure but Campbell was there to keep the boys in the game.
Tavares then answered back from Tampa Bay’s pressure that they were applying and scored a nice redirect goal that tied the game at one. The game then went into overtime and Toronto was given a power-play for Hedman’s slash on Tavares. This time, they actually scored on the man advantage from a one-timer by none other than Nylander.

The third star of the game goes to the man who scored the game-winning goal, William Nylander. He, along with some of the other top-six forwards didn’t have the greatest of 40 minutes in this game, but then turned it up in the third period and into the overtime period. We saw Sheldon Keefe use the blender a couple of times in the third period that saw Nylander go back on a line with Tavares and Kerfoot and even Ritchie getting a shot in the top-six a couple of times too. It’s safe to say the line juggling helped Toronto to still apply some pressure and ultimately come back to tie this game.
This wasn’t the standard Nylander game that we’ve seen throughout the majority of the season. As I said, he and the others didn’t look all that engaged throughout the first 40 minutes but came alive in the third and in overtime and ended the game with a huge play on the power-play. He finished tonight with a goal and four shots while playing his best hockey in the latter part of this game. But a win is a win and the big boys helped lead this team to victory after falling behind in the first period. That’s why they’re paid the way they are. They just have to keep that up and help lead this team every night.

Another great game from the captain, John Tavares as he helped bring this team back into the game with a goal late in the third period that tied the game at one. After a slow first two periods from Tavares and the other three big guys, it’s safe to say all four of them played their best hockey in the third period and into the overtime period, that’s for sure. Although he didn’t have a strong 40 minutes, there was one thing in the first period that I liked what Tavares did, and that was sticking up for his teammate Mitch Marner who got hit with a check to the head by Sergachev.
After the hit was made and Marner went down on the ice, Tavares went after the Lightning players and looked pissed off that the hit was even made in the first place. There is no place for that stuff in this sport and Tavares clearly didn’t like it either and went after him while the rest of the Leafs on the ice followed. Anyways, that’s not the biggest play from him tonight. He delivered a great redirect goal in the slot with just under a minute left in the game from a pass by Marner that tied the game at one and ultimately sent the game into overtime. Tavares has been a beast lately and has three goals and three assists in his last four games. He now has nine points in 11 games to start the season.

Arguably this team’s MVP to start the season just had himself another great game against the defending back-to-back Stanley Cup champions, Tampa Bay Lightning. What a game from Campbell from start to finish as he held down the fort and gave the boys a legit shot to come back in this game and pull out a win. Tampa Bay scored just after midway through the first period on a goal from Maroon that beat Campbell, but after that, Toronto just turned it on and outplayed the Lightning for a massive stretch in the game and helped Campbell out a bit after he was steady early in the game.
Towards midway through the third period, Tampa Bay started to apply pressure again and Toronto was on their heels. Campbell had to answer to a handful of quality chances from the Lightning including opportunities from some of the league’s best players like Point and Stamkos. He held it down and helped lead this game into overtime and eventually helped pull out a win as well. Without a doubt, he is tonight’s first star of the game and improves his record to 5-2-1 in the early season.

This was a very rough game for Jake Muzzin from basically start to finish and I think a lot of others would agree with me on this take. He just didn’t look that engaged from the beginning and looked lost at some points out there on the ice tonight. He was on the ice for Tampa’s first goal and didn’t really make an attempt to close in on Maroon and he just dove on the ice and slid into the net and Maroon scored.
He fell a couple of times on the ice when no one was around him and as I said earlier, he just didn’t look engaged and looked a little lost out there at times. He’s lucky that TJ Brodie had himself a great game tonight and made a couple of good defensive breakups when the team needed it. It’s no secret he hasn’t had the strongest of starts to this season, but at least he hasn’t been the worst either. If the Maple Leafs are going to succeed, they’re going to need a guy like Muzzin to be playing at a high level almost every night.
Uncategorized
Recent articles from Joseph Zita