Can the Leafs recoup draft picks this offseason? 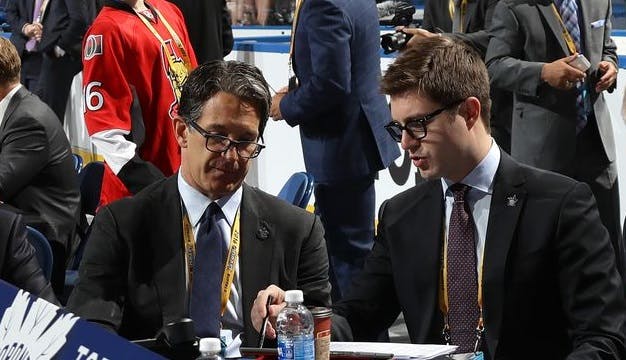 By Dylan Murphy
4 months ago
The Toronto Maple Leafs have been big spenders in the last few years. During the lead up to both of the previous two trade deadlines, the Leafs have sent over a dozen draft picks out the door for depth adds, Mark Giordano, and the huge mistake that was Nick Foligno.
As we head into the 2022 draft, the Leafs hold just three selections, as was the case last year. This situation begs the question: what assets can be traded to restock the cupboard and give the Leafs some extra options at this draft and beyond?

Reportedly disgruntled at a lack of opportunity with the organization, right-handed shooting offensive defenceman Joseph Duszak is currently an RFA with arbitration rights.
After three seasons in the AHL, (the first of which was split between playing for the Growlers in the ECHL and Marlies,) Duszak has established himself as a fairly gifted points producer (52 points in 61 games this past season, his best pro season by far) who struggles in his own end. Those defensive gaffes, plus the emergence of younger and more viable NHL options in Sandin and Liljegren, prevented Duszak from making his NHL debut.
At this point, I doubt the Leafs will elect to give him a qualifying offer so that he could be granted free agency to seek a position on a team that’s not quite as stacked on defence, but for the next few days at least, his signing rights are still Leafs property.
Should a trade for those rights happen, expect a late round pick at best.

Another offseason, another round of speculative Kerfoot trades, am I right folks? Jokes aside, this year may be different.
There’s an argument to be made that Kerfoot is currently at the height of his value. He’s entering the final year of his current contract and due to the signing bonus-heavy structure of the deal, as of 6 days ago, he is only owed a league-minimum salary for the entirety of this upcoming season.
For cash-poor teams like Arizona and Ottawa, contracts with this type of structure and standing hold tremendous value, especially as those teams try to navigate to the floor of the salary cap. Add in the fact that Kerfoot is a very useful and versatile player, and you have reasons enough to push for a deal. Should Kyle Dubas seereason to shed Kerfoot’s $3.5 million cap hit, he could reasonably ask for a fairly high pick, like a late second or early third rounder.

Our Managing Editor, Jon Steitzer, put it best yesterday:
Holl is on the final year of a three-year contract worth $2 million each year (he also has a 10-team no trade list that’s a minor complication to a trade at best,) and has played top-4 minutes (to varying degrees of success) for a large majority of that contract’s lifespan to this point.
With the recent news cycle surrounding Rasmus Sandin and the lingering question of ‘where is he going to play?’ It makes sense to at least consider moving a guy in Holl who holds slightly more value than his overall skill level would normally dictate. Right-handed shooting blueliners hold more value on the trade market due to being a bit more rare, and with how team-friendly Holl’s deal is, he’s probably worth at least a third, or a couple of mid-round picks.

There are a number of things flying around about Mrazek these days. Most recently, we have Kyle Dubas seemingly hinting that Mrazek is still in the team’s plans as a player, (though this may just be Dubas playing coy with the media contingent at the draft,) and yet over the past few days, the swirling speculation both in the media space and the fan base has seemingly linked an inevitable Mrazek trade to the Chicago Blackhawks, which seems likely at this stage.
The rumours of this trade took concrete shape in Mark Lazerus and Scott Powers’ recent article for The Athletic speculating on the questions surrounding the Blackhawks’ potential offseason moves. Their speculating return is “draft picks and/or prospects” so this is certainly a situation to watch.

Lastly, a player who arrived, both to the Leafs organization and onto this list, a little bit out of left field.
Since signing with the Marlies for the 2021 season as an undrafted free agent, Gogolev became a prospect to watch almost overnight, scoring at a point-per-game pace and then immediately signing an entry level contract with the Leafs and foregoing the second year of the AHL deal that was signed.
Gogolev had a disappointing season, putting up only 8 points in 31 games with the Marlies. He found success with the Newfoundland Growlers after a late-season reassignment, but there were unconfirmed reports circling in the Growlers media circle that Gogolev was disappointed with how his developent was handled this year, and that he was scratched in a pivotal Kelly Cup Playoffs game due to attitude issues.
To anyone on the outside of the situation, it’s easy to agree with that statement. Gogolev was somewhat relegated on the Marlies to a fourth-line role and other prospects were given more opportunity. Even the circumstances surrounding his recall to the AHL after the initial Growlers stint was odd, as he did not dress for a single game until he was re-assigned to the Growlers in the second round. Perhaps a change of scenery is in order for the young player.
Any return on Gogolev alone would be fairly minimal, a late round pick probably, but perhaps he could be included in a deal with another player mentioned here, if they are committed to giving him a fresh start.
More From TheLeafsNation.com