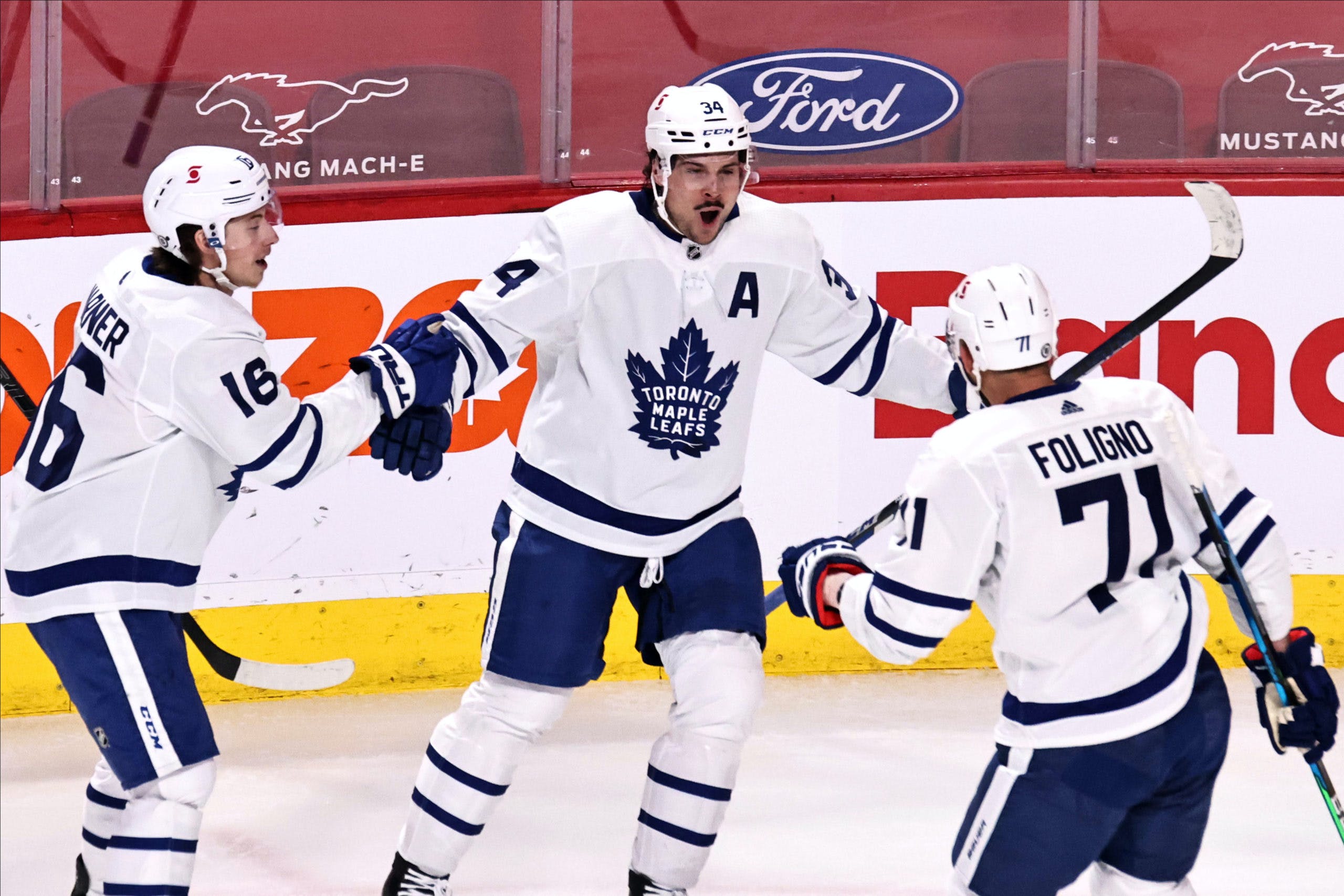 By Nation World HQ
1 year ago
by OddsShark (@OddsShark) – Sponsored Post
The Toronto Maple Leafs will hope for better puck luck as they catch the rival Montreal Canadiens on the second night of their back-to-back. The Maple Leafs are -200 favorites and the Canadiens are +170 underdogs with a 5.5-goal total on the NHL odds for Thursday at sportsbooks monitored by OddsShark.com.
The Maple Leafs are 6-2 in their last eight games as a home favorite against Montreal, but three of their four most recent wins in that scenario were by one goal. Toronto is just 8-6 over its last 14 home games as a -175 to -225 favorite, with the OVER hitting 10 times (how the OVER/UNDER works). Montreal, though, is 2-10 over its last 12 away games as a +150 to +200 underdog, with seven matchups finishing UNDER.
Canadiens vs Maple Leafs | OddsShark Matchup Report
The Canadiens, who lost 5-1 against the Ottawa Senators on Thursday, are 8-12 in their last 20 games when they played the previous night, with 12 of those matchups finishing OVER at online betting sites.
Toronto leads the season series 5-2-1. The Maple Leafs have narrowly outscored the Canadiens 16-13 in the five-on-five on phase, where Natural Stat Trick credits Toronto with a slight edge in expected goals-for percentage, or xGF% (51.7), scoring-chances share (50.2) and high-danger chance share (54.1) in the head-to-head matchup. The Canadiens are four-for-16 on the power play and the Maple Leafs are six-for-21. (All advanced stats are based on score- and venue-adjusted five-on-five play.)
The Canadiens, who are 24-19-9, have gone eight games without scoring more than two goals in the five-on-five phase and have been outscored 21-9 during this stretch. Both the Phillip Danault-Josh Anderson-Cole Caufield and Nick Suzuki-Tyler Toffoli-Joel Armia lines spent far more time chasing the game than creating against Ottawa on Wednesday, although Suzuki had a team-most seven shots on goals. Montreal’s relative power-play success against Toronto also makes Caufield and defenseman Jeff Petry potential plays in anytime scorer props. Over the past two seasons, Montreal is 4-6-1 in away games on the second night of a back-to-back, but has averaged 3.18 goals in those matchups while allowing 3.27 per outing.
Since April 6, Montreal is 31st and last in the NHL in goals-for percentage, or GF% (32.8), and also ranks 23rd in xGF% (46.5). Over this span, the Canadiens are 29th in goals per game (2.06) and 23rd in goals against (3.29). Their power play ranks 17th (18.2 percent) and their penalty killing ranks 12th (84.4).
Carey Price, who sustained a concussion on April 19, has rejoined the team. Price has a 12-7-5 record with a 2.64 goals-against average and .901 save percentage. Jake Allen, who is 11-11-4 with a 2.65 GAA and .908 save pct., allowed five goals on 28 shots against Ottawa on Wednesday. Backup Cayden Primeau has never faced Toronto.
The Maple Leafs, who are 33-13-6, did not allow a five-on-five goal during their 3-2 overtime defeat against Montreal on Monday and also had a 58.1 xGF%. The Auston Matthews-Nick Foligno-Mitch Marner and John Tavares-Alex Galchenyuk-William Nylander lines each had proficient nights in xGF% terms. Marner and Nylander were tied for second on Toronto in shots on goal (four) but neither scored. Toronto is 8-3-1 in their last 12 home games with two days of rest, and their goal differential (3.42 to 2.92) is near-identical to their margin over the last 30 days.
Toronto ranks fourth in GF% (61.0), and second in xGF% (59.3) over the past 30 days. The Maple Leafs are seventh in goals per game (3.38) and 15th in goals against (2.92) during this span. Their power play ranks 27th (10.3 percent) and their penalty killing ranks 26th (71.4).
Jack Campbell, who is 15-2-2 with a 2.11 GAA and .925 save percentage, saved 0.66 goals fewer than expected during Toronto’s overtime loss against Montreal on Monday. Frederik Andersen is on a minor-league conditioning stint, which suggests he will not play for the Maple Leafs on Thursday.
Check out OddsShark on Twitter and Instagram or head to YouTube for analysis on this week’s top games. As well, the OddsShark Computer serves up daily NHL picks for bettors.
Odds News
Recent articles from Nation World HQ