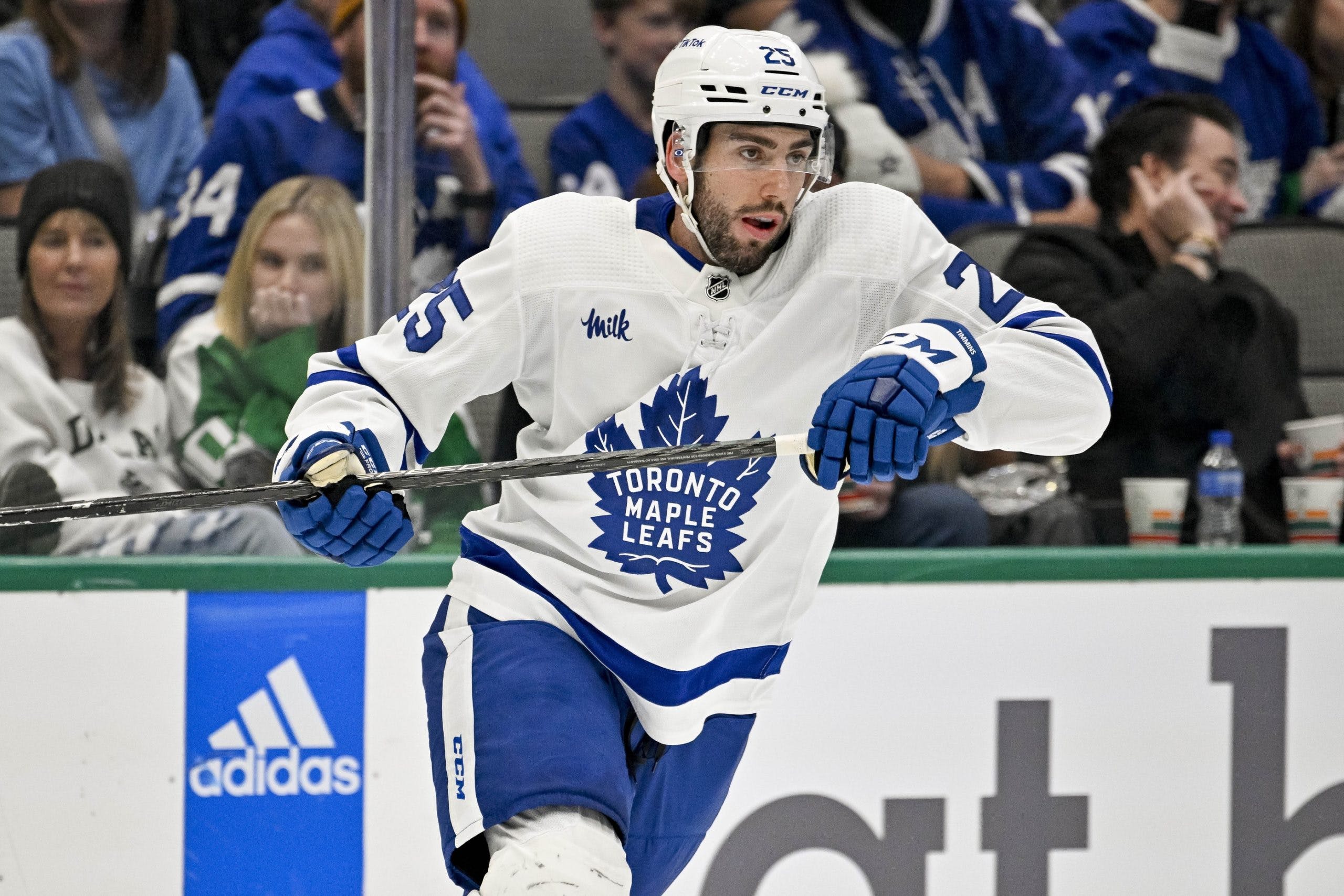 By Mike Gould
1 month ago
There’s a lot we don’t yet know about Timothy Liljegren’s upper-body injury, which kept him off the ice for much of the back half of Thursday’s 3–1 Toronto Maple Leafs loss at the hands of the New York Rangers.
We do know Liljegren left Madison Square Garden with his right hand wrapped up in bandages, which doesn’t seem to be a great sign for the 23-year-old defenceman. He played 10:25 in the game before leaving late in the second period.
In the NHL, injuries create opportunities. We should find out more about Liljegren’s condition relatively soon — Maple Leafs head coach Sheldon Keefe indicated last night that he’ll be assessed further today — but in the meantime, there appears to be a top-four spot free for the taking.
There’s one obvious candidate. You’re probably already saying his name in your head (you already read the headline, after all): Conor Timmins.
The 24-year-old righty has been nothing short of fantastic since coming over in a trade with the Arizona Coyotes in late November. Through five games with the Maple Leafs, Timmins has five assists and a sparkling 61.54 expected goals percentage at five-on-five. He picked up another point on Michael Bunting’s goal at Madison Square Garden on Thursday.
Timmins has maintained a strong xGF% in each of his first five games with the Maple Leafs (never coming remotely close to dipping below 50 percent) despite a wide range in the quality of their opponents. He’s looked good every night and even fared well as he logged 22:05 — tops among Maple Leafs defenders — against the Rangers.
Of course, there’s reason to be concerned about Timmins’ own stability and durability as he takes on a bigger role with the Maple Leafs. With Liljegren, Morgan Rielly, and Jake Muzzin all sidelined, this is a relatively young defensive group with only a couple of elder statesmen — fortunately, Mark Giordano and T.J. Brodie are still plenty capable.
Then, there’s the issue of Timmins’ extensive injury history. His career with the Coyotes crash-landed before it could even start due to two significant injuries, the first of which kept him away from the team for all but six games in the 2021–22 season. The ‘Yotes traded Timmins to the Maple Leafs after he suffered another injury at the start of 2022–23.
Thus far, Timmins has avoided the injury bug with the Maple Leafs and has fit right in on a pairing with Brodie. Keefe’s best bet might simply be to rely on that duo a bit more while searching for an interim partner for Sandin — could that be Mac Hollowell, who recently returned to the Marlies after a strong NHL stint?
It’s hard to believe Coyotes general manager Bill Armstrong, who has won a fair few trades since taking over the mantle in Arizona, ever figured it would be the right call to deal Timmins in exchange for big forward Curtis Douglas. Timmins has always had NHL potential and would’ve been a better bet on the Coyotes’ NHL roster than the likes of Dysin Mayo and Patrik Nemeth.
In this case, Arizona’s loss is Toronto’s gain. Timmins still has plenty to prove, but the early returns are almost all positive. Now, the real tests begin.
Editorials
Recent articles from Mike Gould