The TLN Three Stars: Depleted Leafs cruise by Columbus in game that was not as close as the score suggests 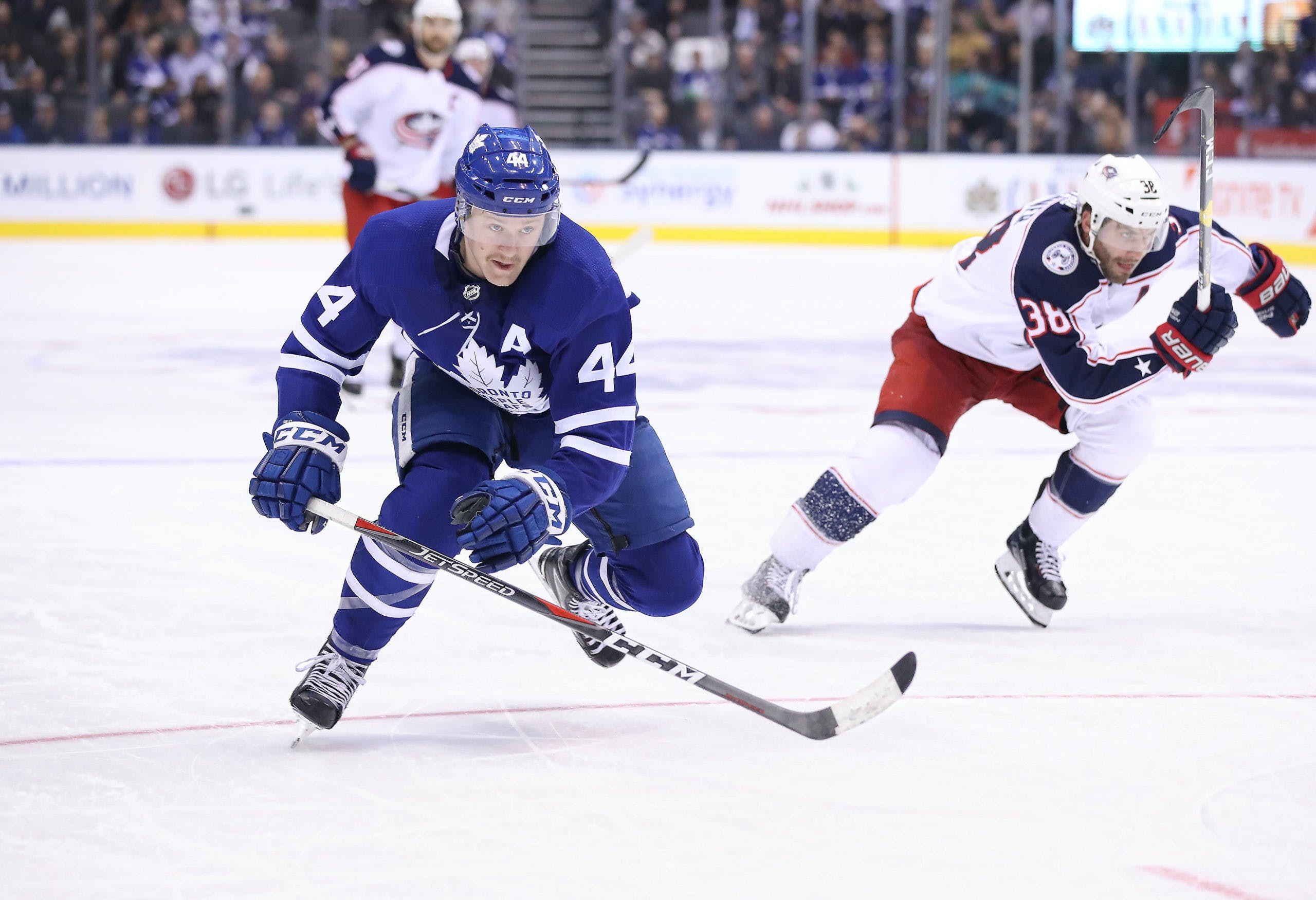 By Dylan Murphy
1 year ago
After a weekend of disappointment, (and a truly embarrassing display of just how fake tough the Jets are, yeah I said it,) the Leafs get back to the win column tonight in a 5-4 victory that can be best described as bittersweet in light of how it ended and the news of the Spezza suspension coming down mid-game.
So, let’s focus in on the game here, and… I’ll be honest, there was never really a point in this game where I thought the Leafs were out of it. Now, let’s take that into context: with four regulars from the roster out of the lineup (Spezza, Marner, Sandin and Dermott), this game ended up featuring the NHL debuts of two Marlies call-ups in Alex Steeves and Kristians Rubins, and even with that factoring into the game, the Leafs dominated the majority of this game in my eyes.
A quick note on Rubins: it’s almost poetic that I ended up covering tonight’s game, given that I cover the Newfoundland Growlers on a day-to-day basis and Rubins has now become the first full-time member of a Growlers team to make his NHL debut, and hopefully, the first of many.
Into the game itself, William Nylander got the party started with an absolute rocket of a shot on the power play. What followed that was perhaps the dumbest goaltender interference coach’s challenge I’ve ever seen in my life, it was equal parts sad and funny from Columbus head coach Brad Larsen.
From that point on, as I already alluded to, the Leafs just dominated up and down the ice. Elvis Merzlikins was pulled after allowing the final Leafs goal at the end of the second. Columbus attempted a comeback, and I’m sure Campbell wants a couple of those goals against back, but on the other hand, he completely robbed the Jackets on a pair of would-be goals. The first of which has to be a save of the year candidate:
Now, let’s get to something that’s been a very long time coming.

HE FINALLY DID IT.
27 games into his Leafs career, Nick Ritchie has found the back of the net. The guy’s been playing so much better as of late and has gotten completely robbed on a number of occasions, including earlier in this very game, but now the monkey’s off his back. Everyone on the team has been cheering for him to finally pot one, and that weight has finally been lifted.
Things you love to see.

Matthews continued his streak of recent dominance with a pair of goals: A tap-in off a Marner-esque feed from Michael Bunting and a blazing snipe that came right off a face-off just seven seconds after Tavares’ power-play goal. Matthews now sits just 4 goals behind Leon Draisaitl for the league lead in goals, and with his first goal tonight, joins a pretty exclusive club:
Now, let’s look at that Bunting assist, because it was truly a thing of beauty.

Rielly was all over the stat sheet tonight, picking up his 4th career four-point game, all assists. You can tell the team was really trying to get him the 5th point, and in fact that may have led to one or two of the defensive breakdowns that led to the late Columbus goals, but alls well that ends well. Rielly is now on pace for 66 points this season and, at least to my eyes, his defensive game definitely seems improved this year compared to the last couple of seasons.

It was mentioned earlier, but challenging Nylander’s power play goal was perhaps one of the dumbest things I’ve ever seen an NHL coach do, other than that one time a so-called coaching genius scratched Jason Spezza in favour of Nick Shore, Dmytro Timashov, and Frederik Gauthier in Toronto’s season opener a few seasons ago, what was that guy’s name again? Ah, it doesn’t matter.
In all seriousness though, what was the basis of this challenge? The tiny amount of contact that’s made after the puck is already past Merzlikins? Still shaking my head at that one, especially since it ended up putting the Leafs’ top power play unit right back out on the ice.
The Leafs will be back in action Thursday against the Tampa Bay Lightning.
Content
Recent articles from Dylan Murphy