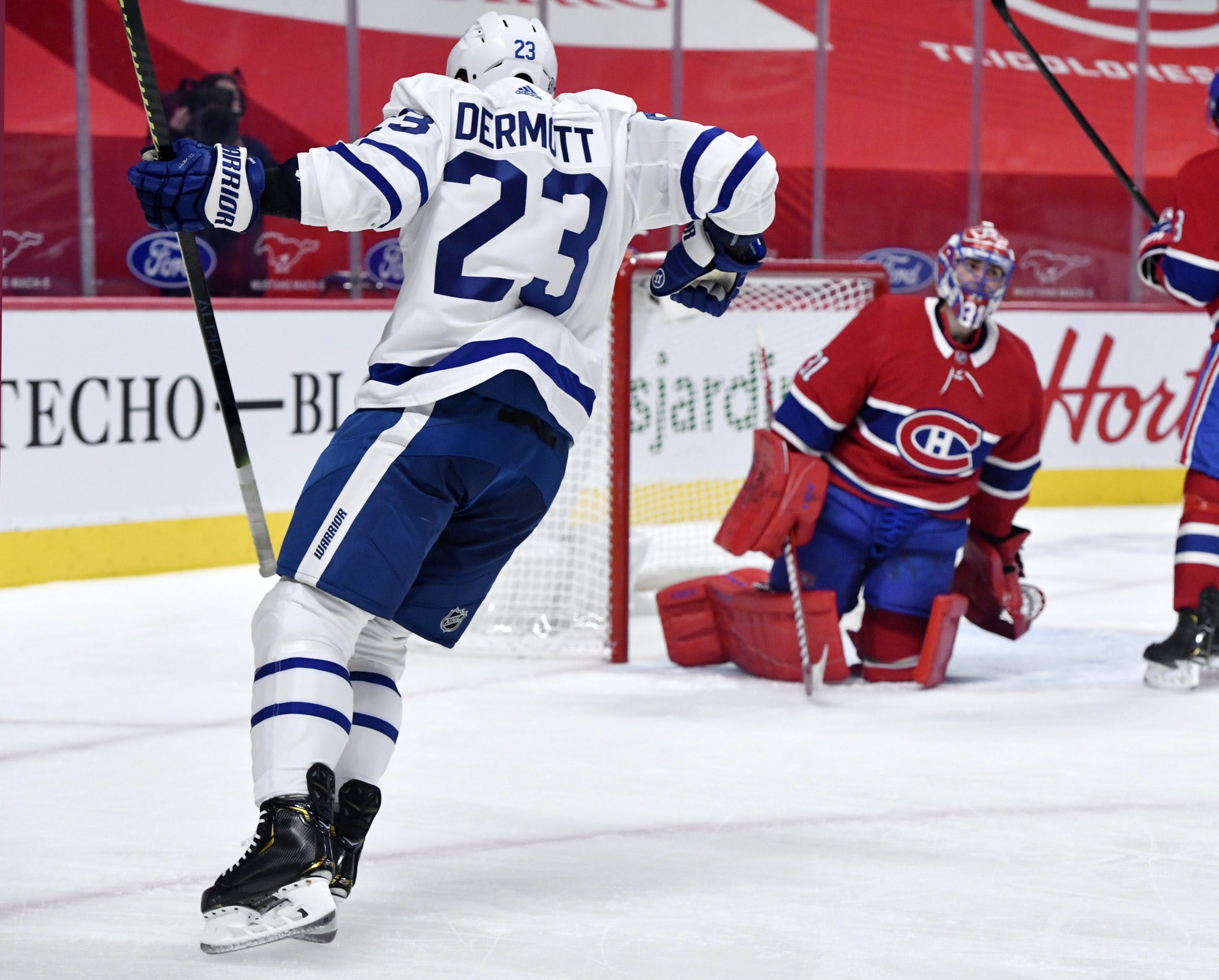 By Brendan Mori
1 year ago
The Toronto Maple Leafs defeated the Montreal Canadiens 4-2 tonight, extending their winning streak to four games in the process. Travis Dermott, Justin Holl, Ilya Mikheyev and Zach Hyman scored for Toronto. Mikheyev’s goal was his first of the year, ending a season-long slump and a drought that lasted over 400 days. Auston Matthews extended his point scoring streak to 11 games, but saw his goal-scoring streak end at eight games. Mitch Marner also saw his points streak end at 8 games.
Just 1:16 into the first period, Josh Anderson ripped home his ninth goal of the season. It was the Habs first shot on goal and one that Frederik Andersen definitely wants back.
The Leafs struggled to mount a response for the remainder of the first period and for the better part of the second period, looking much like they did last game against the Canucks. Not sure if it’s the schedule, but the team’s overall intensity has dropped a bit recently.
15:38 into the second period, the Leafs and Habs are playing some good ol’ four-on-four hockey. Travis Dermott gets the puck and does his best Auston Matthews impression, ripping a shot high blocker past Carey Price to tie the game up at 1-1.
The Leafs once again, headed into the third period of a game tied 1-1. 1:50 into the 3rd period, Justin Holl took a page out of Shea Weber’s book and blasted a rocket past Carey Price to give the Leafs their first of the game. Not long after, Ilya Mikheyev finally gets the monkey off of his back, extending the Leafs lead to 3-1.
Tomas Tatar would score late in the third period, but Zach Hyman would seal the deal with an empty netter. Auston Matthews picked up an assist on the Hyman goal, extending his point streak to 11 games.
Overall, the Leafs pretty much followed the script they wrote last game against the Canucks. Something that is definitely concerning is how lacklustre the team looked for the majority of the night. Passes were off, guys were not in sync, simple plays were not working… Something to keep an eye on.

I thought this was one of Jake Muzzin’s better games this season. Looked good in the defensive zone, got engaged physically and also chipped in three assists. Muzzin is the type of defenseman who you don’t really notice, then you check the scoresheet and see he has three assists and played almost 20 minutes. When him and Holl are both playing well, that pairing is as good as any other in the league.

Two games in a row now where the team has clearly looked out of sync. Totally understandable given how professional sports works, but it is concerning that this has happened two games in a row. Saturday’s rematch against the Habs will be a big one to watch for.

I know I was thinking about this during the game (Leave a comment of who you think the Leafs should pursue).

The Leafs are back in action on Saturday, February 13th in a rematch against the Montreal Canadiens. Puck drop is at 7:00pm EST on Sportsnet Ontario.
Uncategorized
Recent articles from Brendan Mori