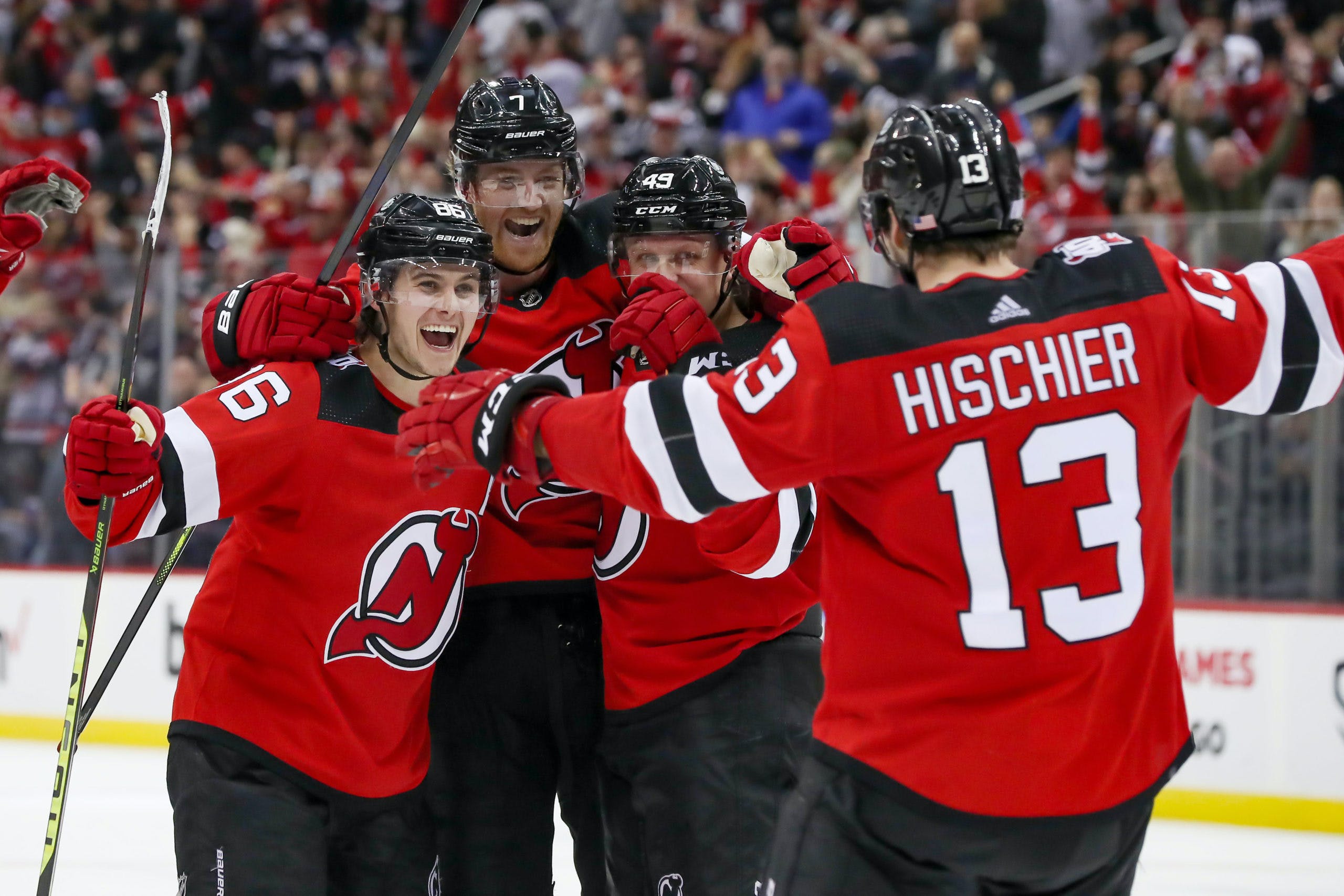 By Scott Ony
2 months ago
It’s almost been a quarter of the NHL season now. What were once early season trends are now looking like they could be legit.
With a win against the Montreal Canadiens last night, the New Jersey Devils have won ten in a row. Connor McDavid is still averaging two points per game and has a realistic shot at being the first player to score 150 since Mario Lemieux in 1995-96. Also, Martin Necas is leading the Carolina Hurricanes in scoring and turning into a star.
Devils win streak
It’s time to start taking the New Jersey Devils seriously. Some people might have said this a couple weeks ago but on paper they don’t look to be one of the top contenders in the league. That said, they win every night and bubble teams rarely pop off with ten wins in a row.
At 13-3 they’re first in the Metro by four points and their +21 goal differential trails only the Boston Bruins in the entire league. During this win streak they’ve outscored their opponents 42-18.
They are also one of the youngest teams in the league. Their opening night roster had an average age of 25.8, fifth lowest in the NHL. Their last three first round picks aren’t making a difference yet either.
2020 first rounder Alexander Holtz has played in just four games, Luke Hughes is still in college and Simon Nemec is down in the AHL. If you think this team is scary now, watch what they’ll do when these guys find their way into the lineup.
McDavid’s dominance
Things aren’t looking great for the Edmonton Oilers right now, but Connor McDavid is still the best player in the world and it’s not close. He’s scored 15 goals and 32 points in 16 games, and nobody even seems to care. It’s just expected of him at this point.
The highest point total we’ve seen since the 2004-05 lockout was Nikita Kucherov’s 128 in 2018-19 and it’s looking like McDavid will get there in early March. He probably won’t keep this two point per game pace up all season but 150 is definitely possible.
It’s absolutely wild that hardly anyone is talking about him this season. He’s about to win his fifth Art Ross and playing the most dominate hockey we’ve seen in nearly 30 years but all you hear is how much trouble the Oilers are in.
Maybe he’ll cool off. I highly doubt it though. Expect him to finish with at least 140 points and score 50 for the first time in his career. He might even top Alex Ovechkin’s post lockout record of 65 goals.
Hot start for Necas
The Carolina Hurricanes have been one of the best teams in the NHL for a few years now and they might be even better this season. 2017 first round pick Martin Necas is having a breakout campaign and could be a major reason this team finally goes on a cup run.
At 23 years old he’s leading the team with 19 points in 16 games. He is on pace to shatter his career high of 41 points. He’s putting the puck in the net too. With seven goals already he could pass his career high of 16 by mid-season.
They may not be dominating the league like Boston and New Jersey, but the Canes might be the deepest team in the East. With the emergence of Necas and addition of Brent Burns this team is going to be extremely tough to beat come playoff time.
News
Recent articles from Scott Ony